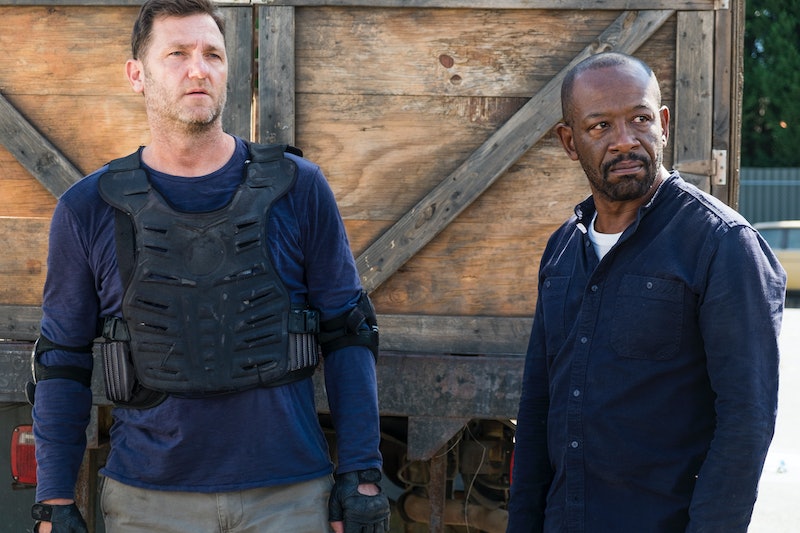 I never would have guessed that cantaloupe drama would be what pushed Morgan Jones over the edge, but there you go. He's finally willing to take a human life again, though the dirty deed has an odd irony to it. Morgan killed Richard on The Walking Dead — the very person who encouraged him to cool it with his pacifist ways.

Richard isn't the only person who died in this episode. Ben, the sweet boy who wanted more than anything to learn Carol's survivalist skills, also perished. This was a tough week for the Kingdom. They may finally be ready to join Rick's war against the Saviors, but it came at a terrible price.

This was, of course, also an important moment for Morgan. It's been a long time since he killed a live human. At the end of the episode, he sat on a porch sharpening his signature stick — which clearly marks the weapon as offensive rather than strictly defensive. Sure, Richard wanted to die in a sacrificial act after Ben was shot, and he did somewhat orchestrate the entire confrontation that lead to the kid being killed int he first place, but now Morgan is over that line. Rick's BFF was triggered by Ben's death. He had was seemed to be PTSD flashbacks to his own son Duane, and his time alone in the suburbs from the episode "Clear." He even confused Benjamin with Duane at one point. While I am glad that someone who is as skilled at fighting as Morgan is will be on Rick's side, I certainly don't want him to lose his grip on reality in the process.

Both Morgan and Carol found the Kingdom at a critical time for their mental well-being, but the time is coming for them to rally. On Talking Dead, actor Lennie James talked about Morgan's quest to learn how to live, rather than just survive. For better or for worse, war is on the horizon. Richard wasn't a bad guy, but his death marks an important milestone in The Walking Dead. The fight against the Saviors will be partially shaped by this moment, quiet as it may be.