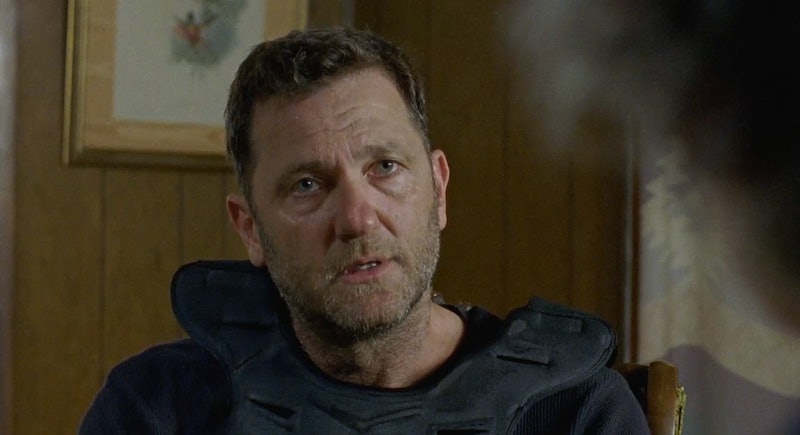 While The Walking Dead Season 7 premiere offered nothing but destruction and devastation, the midseason premiere has a promise of hope. As the Alexandria group will be uniting with other communities to try to defeat Negan, it's time to get acquainted with members of the Kingdom on The Walking Dead. A character who was introduced in the first half of Season 7 is Richard from the Kingdom and he's worth getting to know before The Walking Dead returns on Sunday, Feb. 12. Spoilers for The Walking Dead comics follow.

The second half of Season 7 is bound to introduce new characters as part of the impending Alexandria, Kingdom, and Hilltop alliance, but The Walking Dead viewers should already be familiar with Richard on some level. You might not have remembered his name (even if you thought he looked oddly like Gerard Butler, like this Vulture recapper, or Russell Crowe, like this fan), but Richard first appeared in Season 7, Episode 2, "The Well." One of Richard's duties for the Kingdom was being in charge of feeding the pigs (and feed them he did) that were then given to the Saviors as part of their deal with Negan. He also is memorable from his first appearance since he got in a fight with the greasy Savior Jared. Although Richard lost his temper, he was shown to be an obedient member of the Kingdom as he heeded Ezekiel's order to stop fighting.

Richard appeared again in the midseason finale when he visited Carol in her home and asked her and Morgan to convince Ezekiel to fight the Saviors instead of keep their arrangement as is. Richard is smart enough to know that one day, Negan's rules will change when it comes to dealing with the Kingdom and it would be better to be on the offense rather than the defense. He also told Carol and Morgan how he lost his family to the zombie apocalypse and doesn't want to lose everything now. Carol wanted nothing to do with his plan and Morgan was hesitant, but previews for the second half of Season 7 show Richard talking about uniting forces and Rick asking Ezekiel to join them in their fight.

That means, fans of The Walking Dead should be pretty thankful to Richard for his foresight and willingness to stand up to the Saviors. While this isn't how he is introduced in The Walking Dead comics, Richard is the head of the Kingdom's security and is Ezekiel's bodyguard. His comic storyline really kicks off when the Kingdom, Alexandria, and the Hilltop plan their battle against the Saviors at the Sanctuary, so he is important to this war.

Unfortunately, Richard's time in the comics is pretty short with him only appearing alive in two issues — and in one of those, he doesn't even have any lines. That's because he gets shot in the chest while battling the Saviors and dies in Ezekiel's arms. After Richard dies, Ezekiel tells Michonne (who he dates in the comics), "Richard ... that was as close as I got to family."

Clearly, Richard's story has gotten a boost on the TV series, but I'm concerned that he'll meet the same fate that his comic counterpart did. It sure seems that The Walking Dead is setting up Richard to die in a battle with the Saviors since he is the only member of the Kingdom who is even willing to fight them right now. The irony of that would perhaps make his death on the AMC series have more of an impact than it did in the comics.

However, until his potential death happens, Richard looks like he will be an integral part of the Kingdom and Alexandria alliance. And he's not only a good person for Ezekiel to have by his side, but for Rick to know as well.