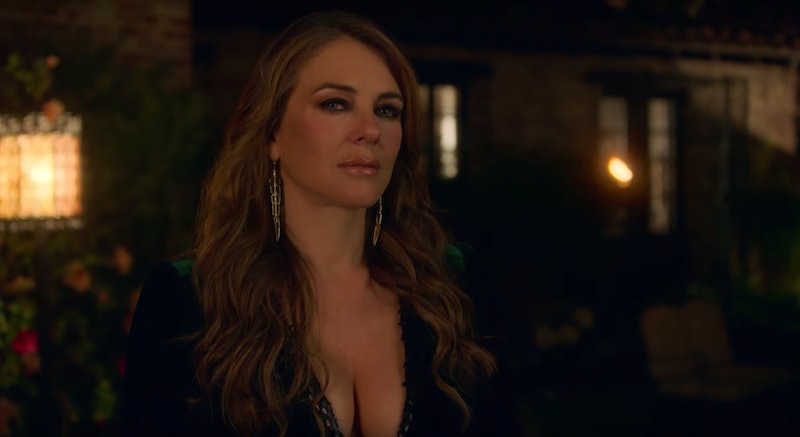 The ancient witch Morgan le Fay is coming to Runaways Season 3, and that means the magic-wielding Nico Minoru will have quite the villain to contend with. Played by The Royals' and Gossip Girls' Elizabeth Hurley, the character is best-known as the enchantress of medieval legend, but in the Marvel comics, Morgan le Fay is an even more sinister, otherworldly force. "Unlike the kids, who are still discovering their powers, she's no amateur," Hurley says in a Marvel sneak peek.

Morgan Le Fay is a staple in Arthurian tales, portrayed most commonly as Arthur's manipulative and seductive half-sister, who quietly plots the downfall of his court and rule. (In other tales, like Geoffrey of Monmouth's Vita Merlini, Morgan is actually a benevolent healer, but the image of Morgan that has endured since medieval times is unsurprisingly the one of a powerful woman who is evil.) There are numerous variations on how Morgan got her powers, but in Thomas Malory's popular tale Le Morte d'Arthur, Morgan is an apprentice of Merlin, and only later becomes a vindictive adversary to Arthur and the knights of the Round Table.

It's this version of the tale that Stan Lee and Joe Maneely mostly drew inspiration from. Their version of Morgan first appeared in Atlas Comics' Black Knight in May 1955; that comic ended after a year, and Morgan didn't reappear under the Marvel banner until Spider-Woman #2 in May 1978. In Spider-Woman, Jessica Drew directly references Malory's work when she stumbles upon "Morgan le Fay's Excalibur" in a museum, which she explains is the fake sword that Morgan swapped out so Arthur could lose the final Battle of Camlann. A thief breaks into the museum and attempts to steal the sword while Jessica is there, but touching the hilt only causes him to be possessed by Morgan, whose soul still exists in the astral realm. Morgan eventually tries to possess Jessica's body, but is thwarted by the Avengers and Doctor Strange.

Morgan is nothing if not persistent though, and over the years she allies with Fantastic Four's villain Doctor Doom and clashes repeatedly with the Avengers, doing everything from summoning Asgardian monsters to channelling the powers of vindictive goddesses. Her near-immortality in the comics is due to her being half-faerie, which is an ancient magical race originating from Otherworld. Thanks to her faerie heritage, she possesses the ability to control minds, manipulate mystical energy, and astral project.

"The Marvel Morgan le Fay is particular and special,” Hurley told Entertainment Weekly. "I liked the fact that she's almost always portrayed as a megalomaniac. And whenever she crops up somewhere, she usually wants to take over the world. So what's not to love?"

While Morgan is completely villainous in the comic, Hurley explained in the Marvel teaser video that Morgan in Runaways is a bit more nuanced. She admitted that while Morgan does "use Nico as a conduit to get out into the world again" she's also "kind to Nico."

"You could say she's powerful, she's evil," Hurley said. "But she also genuinely believes she can make the world a better place, and she genuinely wants the Runaways to join her."

It's not as if the Runaways are unused to having adults with shady motivations in their lives, right?

More like this
Dorothy Wang & Morgan Stewart Were The Ultimate BFFs On 'RKOBH'
By Sophie McEvoy
'The Queen’s Gambit' Season 2 Tweet Wasn’t From Anya Taylor-Joy
By Mary Kate McGrath, Jack Irvin and Grace Wehniainen
Ashton Kutcher Wants Danny Masterson “To Be Found Innocent” In Rape Retrial
By Jake Viswanath
Pamela Anderson's Sons Brandon & Dylan Have Their Own Hollywood Careers
By Arya Roshanian
Get Even More From Bustle — Sign Up For The Newsletter
From hair trends to relationship advice, our daily newsletter has everything you need to sound like a person who’s on TikTok, even if you aren’t.