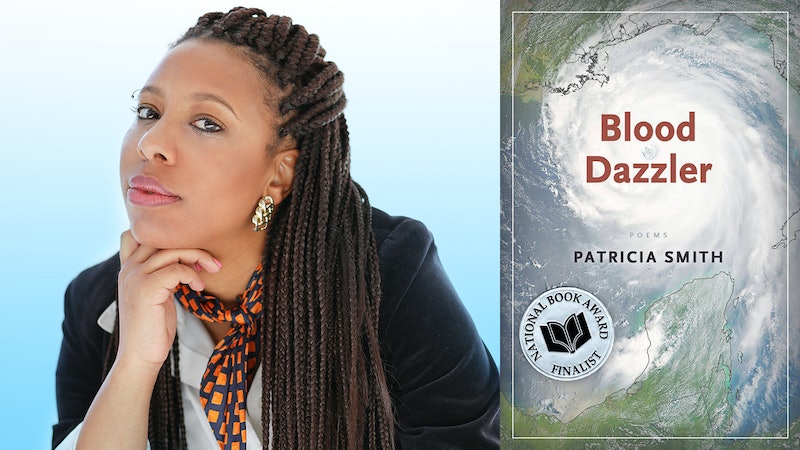 Each month, the Bustle Book Club asks an author to recommend a book they think everyone should read. In July, Morgan Parker, author of the poetry collections Other People's Comfort Keeps Me Up At Night, There Are Things More Beautiful Than Beyoncé, and Magical Negro, as well as the forthcoming YA novel Who Put This Song On? recommends Blood Dazzler by Patricia Smith.

On August 29, 2005, Hurricane Katrina made landfall in New Orleans and unleashed one of the deadliest storms in recorded history upon the city. Nearly 2,000 people died as a result of the storm and the subsequent floods, and inadequate relief efforts made much of the suffering worse. But while America watched the storm — and its aftermath — on their television screens, the people of New Orleans lived it in real-time, an inescapable nightmare. In this month's selection for Bustle Book Club, the story is told from their perspective.

Recommended by poet and young adult novelist Morgan Parker, the National Book Award finalist Blood Dazzler by Patricia Smith was published in 2008, just a few years after Hurricane Katrina. In these poems, Smith gives voice to the "politicians, the dying, their survivors, and the voice of the hurricane itself." The result is a powerful and haunting collection about the human toll of political inadequacy and the hard road to healing. The collection, though 11 years old, is more urgent than ever, and it's a necessary read for all Americans, especially as we approach the 14th anniversary of the storm. (You can read an excerpt from the collection at NPR.)

Here's why Morgan Parker thinks you should read it:

"This is a book that made me audibly gasp and grunt and shake my head while I was reading it. Not only is this a collection of poems about, examining, and even in the voice of Hurricane Katrina, it's also a gorgeous and smart narrative about America, about New Orleans, about black communities and black commodity, about our responsibility to one another, about survival and will. Smith is a MASTER of lyricism and poetic form — her rhymes are so seamless you almost don't notice them — and she is a venerable storyteller. This book is at once a page turner and one you'll want to take your time savoring."

If you haven't read much poetry before, there's no better place to start than with the collections of Patricia Smith and Morgan Parker, the author of the collections Other People's Comfort Keeps Me Up At Night, There Are Things More Beautiful Than Beyoncé, and most recently Magical Negro, a collection that Well-Read Black Girl founder Glory Edim described in Time Magazine as, "wry and atmospheric, an epic work of aural pleasures and personifications that demands to be read–both as an account of a private life and as searing political protest."

'Who Put This Song On?' by Morgan Parker

Parker is also the author of the forthcoming YA novel Who Put This Song On?, about a 17-year-old black girl struggling to make sense of her identity, her faith, her blackness, and her mental health. Loosely based on Parker's teenage experiences and her own diaries, Who Put This Song On? shares the lyricism, humor, and irreverent, confessional quality of her poems. It's not out until Sept. 24, 2019, but you have plenty of poetry to read while you wait.