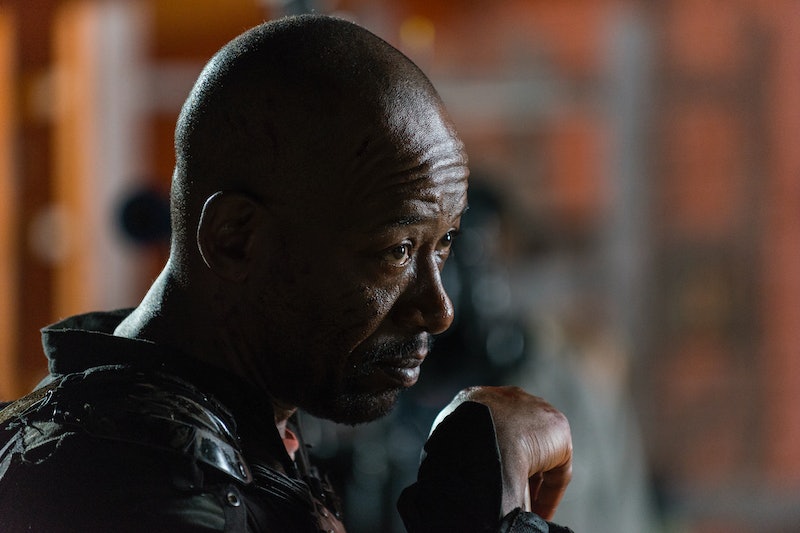 Spoilers for the Feb. 25 midseason premiere. Both Morgan and Carol have checked their killer instincts on The Walking Dead and it's easy to see why — they're really good at taking lives and waging war. When the two team up, it's compelling television... at a cost. Morgan disembowels a guy on The Walking Dead and the brutal kill is concerning for fans worried that he may be losing his grip on humanity.

Morgan and Carol invaded the Kingdom to rescue Zeke from the Saviors. It was almost too easy for them — the price was personal. Is Morgan OK? Just the fact that he's killing again is cause for concern, and now it seems that not only can he not stop, but he's becoming less and less empathetic. Mental wellness is hard enough in the real world, and almost impossible in the apocalypse.

What started as self defense, as one of the remaining Saviors was on top of him in the auditorium, turned practically medieval as Morgan punctured the guy's neck and started dissecting him.

The ease at which the survivors become murderers was underlined by Carl confessing his first kill to his father before he died. It was paralleled by Morgan coming slightly closer back down to Earth. Thanks to Carol, King Ezekiel, and a little self-reflection, he sort of spared a man's life. "You told me we can be better than them," Carol said. "You said that to me."

While Morgan wasn't the one to kill that final Savior, he was prepared. "I have to," he sadly tells Carol. Even after pulling a man's guts out, he's still pursuing more kills. "He's clearly in a bad place," says Greg Nicotero on The Talking Dead. "He's not just a soldier. He's gone to this barbaric place. He's literally become this unstoppable killer."

To be fair, this is a fictional show, and a lot of fans are just impressed.

This. This is the thing. If human survivors start acting like the zombies that they fear, they're doomed.

Fun, sure, but at what cost?

That's the right reaction. That one right there.

This is an excellent point. However, in a way Morgan gained a son in this episode as well. It was seeing young Henry kill Gavin that really hinged him again. Rick and Michonne aren't the only ones thinking about building a better, safer future. Carl stopped himself from becoming like Morgan, and Morgan can stop Henry. Hopefully that will keep him from falling off the deep end forever.

Of course, we also know that actor Lennie James is bringing Morgan to Fear The Walking Dead, and we don't quite know how or when that is going to go down — except that James has already started filming on the spin-off. Is Morgan going to leave in order to center himself again? Is he going to die? Get banished? Morgan's story is not over yet, and he seems to be nearing a figurative and literal crossroads.

"The journey we're gonna see Morgan on expands his character," said James in a recent interview with TVLine about his upcoming arc on Fear, "but is still part of that battle that he's having — with himself and the world around him and trying to figure out how best he can continue with the punishment that he's been given, which is to keep living."

Sure, it's cool to see Morgan pull out innards. He's like the Batman of The Walking Dead. If he wasn't sided with the good guys, he'd be a serial killer. Hopefully he'll find some kind of balance, if not on The Walking Dead than further down the line.