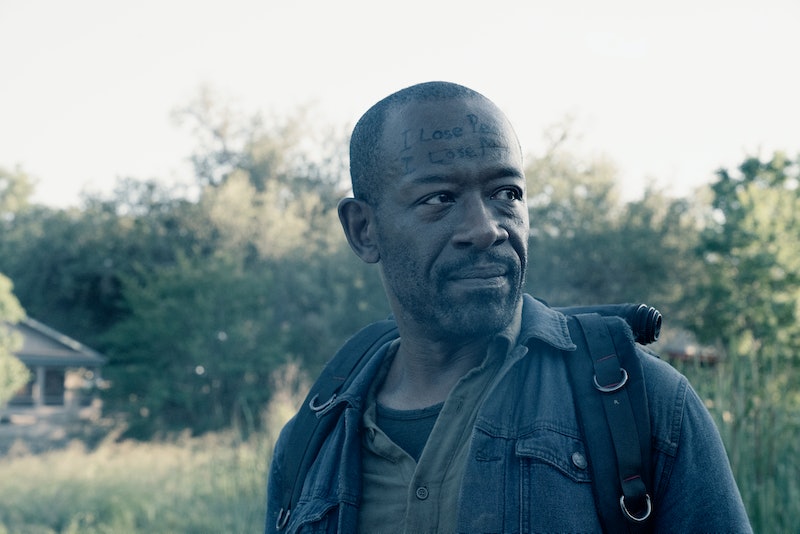 So the Fear The Walking Dead survivors won't be going to Virginia after all. It's actually not all that surprising, since if the group ever really made it to where The Walking Dead takes place, the spin-off would cease to exist. Something or someone had to stop this group from completely dissolving into the original series. So now, instead, Morgan is leading the group on FTWD and they're going to start delivering supplies and building a community of their own. Rick would be proud.

Morgan wanted to shepherd his new survivors to the communities that took him in on The Walking Dead: the Alexandria Safe-Zone, Hilltop, and the Kingdom. He started talking about it almost immediately after leaving his BFF Rick Grimes for new horizons on the AMC spinoff. Since the very beginning, Morgan has struggled with whether or not he is better served in isolation or helping others, if helping others means turning into a heartless killer, so just the fact that he took on any leadership role in Fear is significant for his journey.

However, after confronting Martha in the Season 4 finale, Morgan decided that he and the group were better served staying put and trying to reach others in the area. He found an abandoned Denim Factory, where the still mysterious character "Polar Bear" had set up the supply box operation that Martha infiltrated. He wants to continue that mission. Alicia wants to continue her mother's work and find new survivors they can house and help. Althea, a lone observer no more, suggests that they start by looking for those she has met and interviewed along the way. Everyone else is either along for the ride, like Luciana and Strand, or looking to atone for something they did — like Charlie, Wendell, and Sarah.

How long will this humanitarian effort actually last? The problem with a lawless society is that there will always be some kind of threat. Just like the hipster vultures came for Madison's stadium dwellers, eventually an antagonistic group will want what Morgan and the others have and try to take it by force rather than joining.

Especially if they start up a brewery in that denim factory. How convenient is it that beer happened to be the exact antidote they needed for antifreeze poisoning in the finale, after the dearly (beerly) departed Jimbo kept harping on how his brews would one day save the world? Was the entire half season leading up to a science lesson about the medicinal powers of ethanol?

Hopefully they won't forget that endeavor. Distributing found supplies is one thing, actually creating something to give back to the apocalyptic world would be even more impressive. Plus, there's still hope that Morgan's efforts on Fear The Walking Dead could ultimately reach The Walking Dead if it comes as a case of Jimbo's Brewbos or whatever they end up calling the stuff.

All in all, it's heartening to see Morgan step into this role. He even smiled in the final moments of the series. When was the last time Walking Dead fans actually saw Morgan Jones smile? The Fear The Walking Dead survivors may not be the family that Morgan thought he needed, but they're a good fit for each other. They've all lost people. They've all lost themselves a little bit, and have thought they were better off alone. Now that they're together, just like the folks in Virginia, they can start something new.

More like this
'The Ex-Wife’s First Look Pics Are Giving 'Gone Girl' Vibes
By Bustle UK
Shonda Rhimes' Net Worth Makes Her One Of The Wealthiest People In TV History
By Hugh McIntyre
The Best 'Grey's Anatomy' Intern Moments, From MAGIC to Glasses
By Grace Wehniainen
'The Rings Of Power' Episode 7 Will Feature An “Unlikely Pairing Of Characters”
By Grace Wehniainen
Get Even More From Bustle — Sign Up For The Newsletter