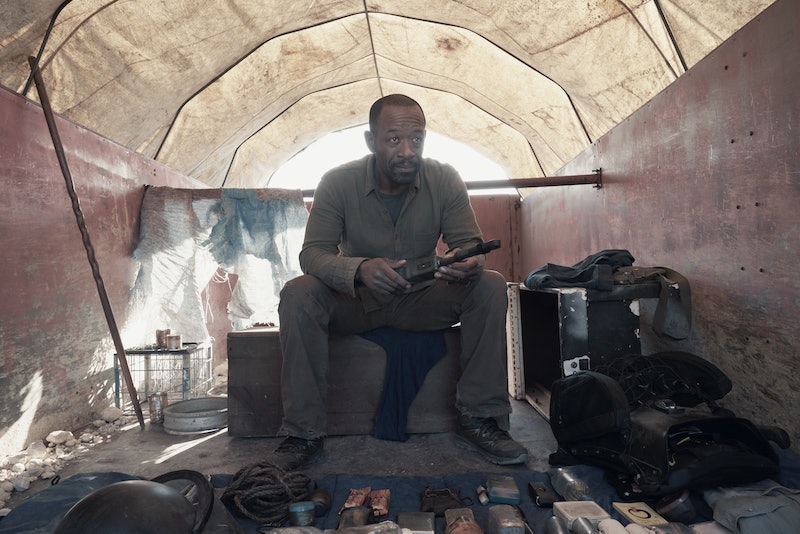 At the beginning of Sunday's midseason premiere, Morgan announces his intention to return to Virginia. "I'm going home, Al," he tells Maggie Grace's character, " and I want you to drive me." She's game, naturally. Think of the stories she'll be able to collect from Rick Grimes and his crew. Then he goes to John. "I never should have left," Morgan continues. "My friend, I think he was right. It's where I belong. It's where I should be."

John's not as keen to follow his friend, unfortunately. To say that the group is in disarray after the showdown at the stadium that ended in Madison's death is a bit of an understatement. John and June have taken in the killer preteen Charlie, and are gathering their strength so that they can hopefully return to John's cabin and start fresh. Strand is on a bender in an abandoned house. Luciana is with him. They've both given up and are ready to stand still for a while.

Meanwhile, Alicia is trying to follow clues to rescue someone she thinks is in trouble. Morgan joins her and continues to try and convince her that going to Alexandria would be good for her. Having lost her whole family, she could use a community like that. Morgan talks about Rick a lot, too, and how he wants to tell Rick that he was right about how Morgan found his way back to people.

"You could be there for us too," Alicia says to Morgan towards the end of the episode. "Right? Then why are you leaving?"

Likely a shock to him, Morgan is part of two families now. There are people who love him spread across the continent. Still, it's not surprising that Morgan is thinking about heading back East to Virginia — and kind that he extended an invitation to some of his fellow survivors. This isn't about Morgan trying to protect the people he loves by isolating himself, or trying to escape his past or what he fears he has become.

For the time being, a storm has prevented Morgan and any others from hitting the road in a major way. Still, is this how the the story is going to unfold? Will Morgan shepherd multiple spin-off characters to the original series? It may not be that easy. For one thing, when The Walking Dead returns, it's starting off with an 18-month time jump. For another thing, Andrew Lincoln is leaving the series too. That Morgan and Rick reunion might not be able to happen.

Could Al and/or Alicia really end up on The Walking Dead? Executive producer Scott Gimple has already teased more impending crossovers in this shared universe. The two women would be an interesting fit, that's for sure, though Alicia is one of the only original Fear characters left.

It's also possible that more characters from the original series will head West — though there are only so many coincidences in a world this vast, so any further crossovers would likely have to be facilitated by Morgan himself. The characters can't just keep bumping into each other. Still, fans will have to see how this season of Fear The Walking Dead plays out. Morgan's intention to see Rick Grimes again certainly changes things.