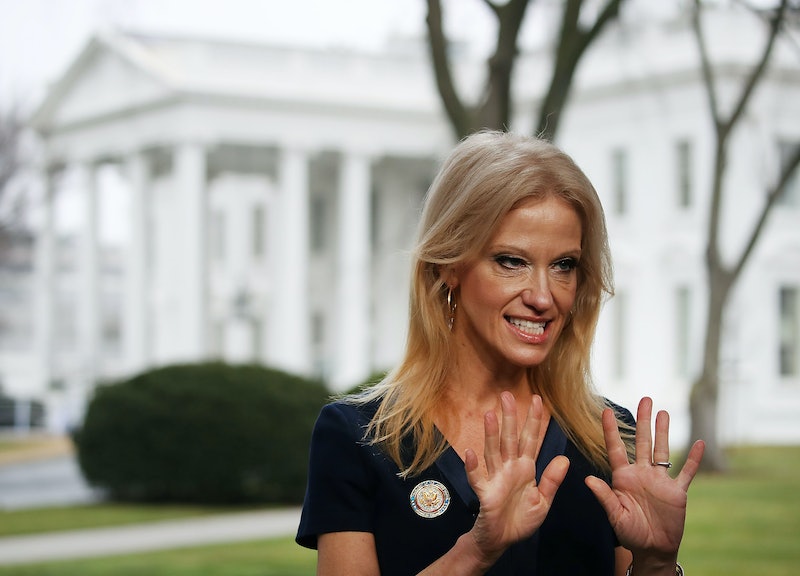 These are rocky times for White House counselor Kellyanne Conway. Once among Trump's most effective, forceful, and unapologetic surrogates in the media, and a regular on many different cable news shows, Conway is now dealing with what could generously be called a "credibility problem." Between her citing of "alternative facts," to her fictitious "Bowling Green massacre," she's offered up a double-shot of mega-viral gaffes that have badly compromised her as an administration source. And now, a major morning show has banned her: Morning Joe is boycotting Kellyanne Conway, according to the show's co-host Mika Brzezinski.

The decision to keep Conway off the show's roster of guests and interviews was first publicly addressed by Brzezinski on Wednesday morning. It came as little surprise, given that she and titular co-host Joe Scarborough condemned Conway for "blathering" and telling "lies" just one day prior. (Bustle has reached out for comment on the allegation that Conway is telling "lies.") Given that, as well as the recent controversies surrounding her, Brzezinski's explanation was not exactly surprising.

Joe was just saying that she books herself on these shows. We know for a fact she tries to book herself on this show, I won't do it. ... I don't believe in fake news, or information that is not true, and every time I see her on television something's askew, off, or incorrect.

That wasn't all. Co-host Joe Scarborough also attacked Conway's reputation, alleging that the former Trump campaign manager is not actually involved in key Trump administration meetings, and accusing her of "just saying things to get in front of the TV set and prove her relevance." (Bustle has reached out to the White House for comment on this allegation as well.)

[Conway]'s out of the loop; she's in none of the key meetings; she goes out and books herself often. ... She doesn't know, she doesn't have the information, she's not in any of the key meetings, she's not briefed, and so she'll go out like she did yesterday. She'll hear me say something about her, as, apparently, this is what I heard from inside the White House, and then she'll immediately start calling.

He continued, claiming that Conway isn't so much lying as being eager to defend herself and the administration without adequate information. "And again, I don't even think that she's saying something that she knows to be untrue," he said. "She's just saying things just to get in front of the TV set and prove her relevance." Conway has not responded publicly to Scarborough's comments.

Brzezinski concluded the thorough denunciation with a direct statement. "I will say, Kellyanne Conway does not need to text our show. At least as long as I'm on it, because it's not happening here."

And thus ended one of the most frontal criticisms and condemnations of an administration official you're likely to see on a cable news morning show, especially one that that's pretty typically courteous and non-combative towards the political establishment. Suffice to say you won't be seeing Conway on the Morning Joe set anytime soon.