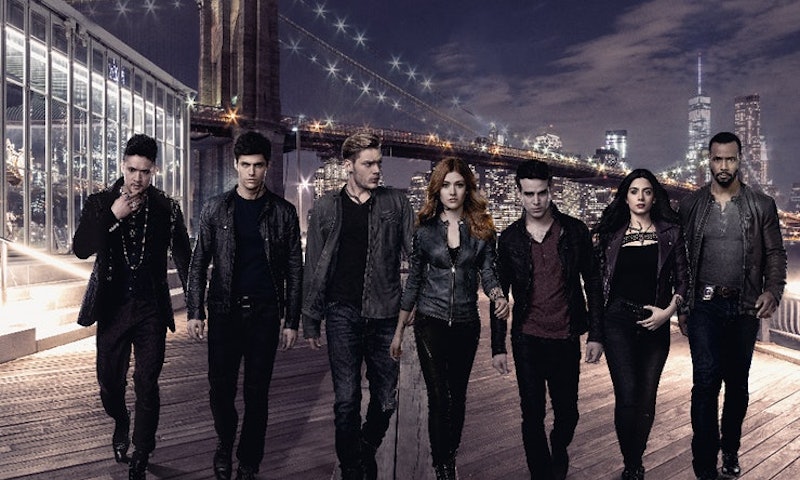 If you're one of the millions of Mortal Instrument fans who have been begging the bestselling author to create stories and characters for an older audience, your prayers have finally been answered: Cassandra Clare is writing a new fantasy series for adults, and you're going to want to make sure it's on your bookish radar. Now excuse me while I pass out from excitement

According to The Guardian, Clare signed a two-book, seven-figure deal with Pan Macmillan who engaged in a heated competition for the UK and Commonwealth rights for Clare's two books. U.S. publisher Del Rey acquired the North American rights to the series for an undisclosed sum of money after a lengthy auction that lasted months, but the sum is rumored to be seven-figures and it is reported that bidders were asked to bring an opening offer of at least $2 million per book. I can only imagine Clare is raking in bukoo bucks for her first foray into adult novel writing.

According to the announcement on the author's Tumblr page, Clare's new book, Sword Catcher, will be the first in a high fantasy series set in an entirely new and imagined world created for adult readers. As the author explains in her post, "over those years, readers of all ages have come to me both to say that they would like to read books about older characters, and also to say that they’d love to see me build my own new world from the ground up." It seems Clare is finally ready to give her fans exactly what they want.

While the official series description has yet to be released — the book is still a work in progress, according to Tumblr post, and news of its publication was only announced on Tuesday — Sword Catcher tells the story of “a young man raised to be the body double for an unworthy prince, [and] a young woman destined to change the world. According to the author, "These characters — criminals, princes, magicians, and warriors — have been in my head for a while, and I am eager to let them out."

Can you already begin to picture a movie or television adaptation of the new series? I know I can.

To be clear, the author has earned every penny of this huge book deal. A star in the young adult fiction world, Clare has amassed a growing army of teen fans since her debut, City of Bones, first hit shelves in 2017. Not only is she the bestselling author of Lord of Shadows and Lady Midnight, the first two novels in The Dark Artifices series, but she also penned the internationally bestselling six-book Mortal Instruments series, and the prequel series, the Infernal Devices trilogy, not to mention the books she has coauthored with Sarah Rees Brennan, Maureen Johnson, and Robin Wasserman.

In the decade since first making a splash in the YA world, over 50 million copies of Clare's massively popular fantasy novels have been printed, and her work has been translated into over 35 languages. The Mortal Instrument became a #1 New York Times bestselling series, and also earned the bestselling titled from USA TODAY, Wall Street Journal, and Publishers Weekly.

Clare hasn't just found success with readers, either. Two of her series have been adapted for screen. Although the 2013 film adaptation of Mortal Instruments didn't receive rave reviews, it still earned a handsome $31 million dollars at the box office. The series prequel, however, has found success on the small screen, and Freeform's popular television adaptation of Shadowhunters returns for its third season April 2018.

Although no official synopsis or publication information about Sword Catcher or the new adult series have been released, it's safe to say this exciting venture into high fantasy world building will delight Clare fans and new readers alike.