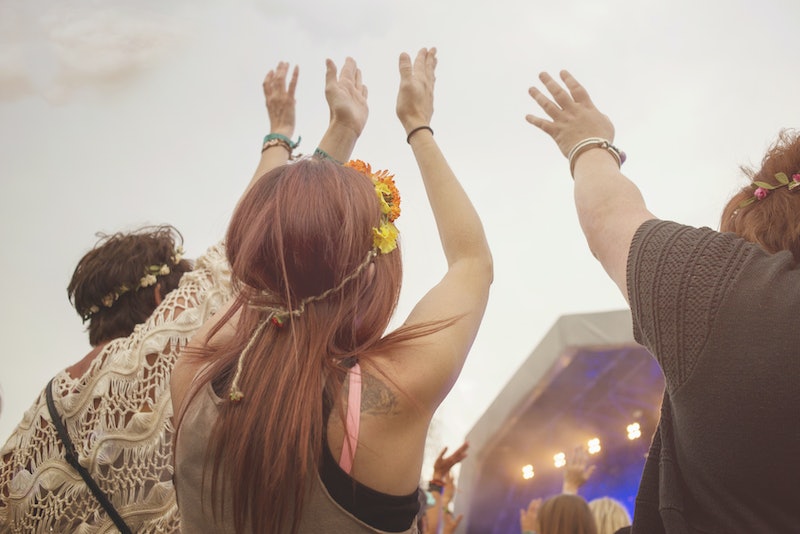 Music festivals are meant to be a time of celebration, when you can get dressed up in ridiculous outfits and embrace the irreverence with some of your closest friends. But new data shows that for many women the environment is anything other than carefree.

A survey from Durham University in the United Kingdom, which so far has 250 respondents, has found that two-thirds of women worry about being sexually harassed at a music festival. Not only that, 30 percent of women report that they have been sexually harassed and 10 percent have been sexually assaulted at a festival in the past. Although the survey is based in the UK, it feels relevant to festival-goers all over the world.

While there has long been word-of-mouth and anecdotal reports of high levels of harassment at festivals, this survey is designed to generate hard numbers — and to demand change. "Concerns about crime and safety, particularly around sexual violence and harassment, has been emerging over the last few years and a number of festival initiatives have been established to raise awareness and prevent sexual violence and harassment," Criminal law professor Dr. Hannah Bows, who is leading the research, told The Independent. "We wanted to provide evidence to inform festival management about the concerns festival goers have in relation to crime and safety and how common different types of victimization are, including sexual violence and harassment." It's so important. It's easy to try to ignore or downplay rumors, but these numbers don't lie.

A recent YouGov survey in the UK found that 43 percent had experienced unwanted sexual behavior at a festival, so it's time to listen up.

Surveys like this is a good start. It's a step forward and proof that, in a post-#MeToo world, we're finally loosing our tolerance for sexual harassment. Yet it's shocking — and worrying — that in 2018 we still have men thinking that they can display such ownership over women's bodies. From telling women to smile to touching them without consent, it happens all the time. This survey shows that women still feel threatened.

And it's not just comments or stares — or even gropes — that women have to deal with, it's the anger that they fear when they refuse the advances, too. “When women reject street harassment or refuse to ‘smile,’ there's a push to put them in their place and an anger that they are not being perfectly objectified," Jae Cameron, program associate at the anti-street-harassment organization Hollaback, tells Bustle. "We often joke internally that someone saying ‘smile’ on the street to a stranger is actually saying 'perform your gender for me.’ The anger when you say ‘no’ highlights how difficult it is to dismantle individual harasser's sense of entitlement over women’s bodies.” Women shouldn't be fearing for their safety when they go to a music festival — they should be focused on having a good time, just like everybody else.

Sexual harassment is a worryingly common part of too many women's experiences — it affects how we view and anticipate events in our lives, like this data shows. Hopefully these numbers will make it clear to festival organizers that more needs to be done to protect women. Summer festivals are not meant to be a time of fear and vigilance.