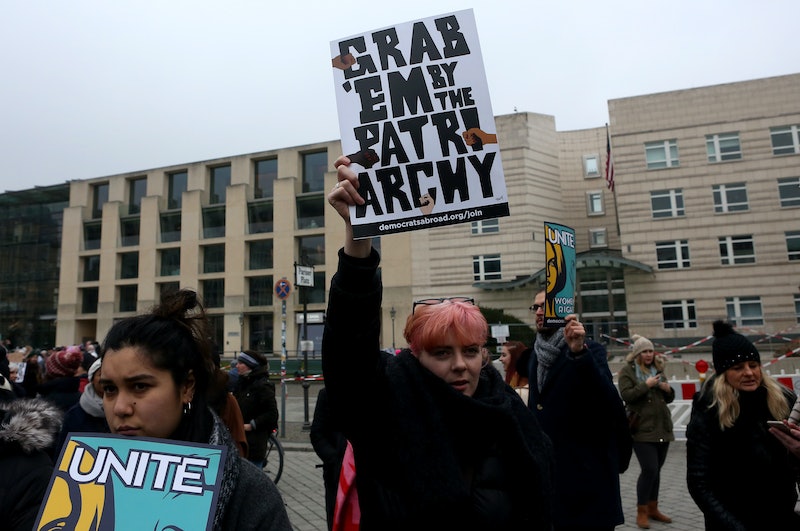 For the last six months, a sexual harassment awareness campaign turned into a viral hashtag and has dominated popular discourse ever since. Unlike most trending topics, however, this one has stuck, and according to a new sexual harassment survey, #MeToo issues might impact elections as well. The findings from this survey, released Wednesday by the Barbara Lee Family Foundation in conjunction with Lake Research Partners and Bellwether Research & Consulting, suggests that politicians ought to be paying closer attention to the movement.

"I think the most important takeaway is that sexual harassment is not a niche issue," Barbara Lee spokeswoman Amanda Hunter tells Bustle. "It really has the potential to make a big impact at the ballot box, and voters feel very strongly, across genders and across demographics."

Based on the figures, Hunter says it "seems like the climate has changed." She notes that the willingness for survivors to openly talk about their experiences about sexual assault and harassment has occurred with marked rapidity. "And it's only been six months since #MeToo and it seems like in many ways a completely different conversation than we were having before that," she says.

What these figures seem to indicate is that lawmakers need to consider including the issues of sexual assault and harassment within their platforms when they decide to campaign for office. While a single survey doesn't speak for all voters, the numbers reported were much higher than usual — and researchers, Hunter says, noticed this. "That is an incredibly huge number," she says, particularly of the results regarding male participants. "You don't always see numbers that high."

That concern was so great among millennial women is not insignificant, either. Millennial women are often considered "drop-off" voters, or in other words, voters who cast ballots during presidential elections, but who don't tend to show up in droves for midterms. Put another way, based on the statistics, it's entirely plausible that voters that might have normally stayed home come November 2018 could instead decide to participate, potentially swaying races.

The Barbara Lee foundation plans to release additional survey results next month, which will be more closely focused on how the issues relate to candidates. But even the data presented thus far indicates that voters are willing to make sexual harassment a serious issue, particularly when it comes down to deciding who they will vote for. And in a democracy, who the people will vote for dictates just about everything else.

The at-times radical figures also suggest that there is some serious solidarity among voters — concerns about sexual misconduct are not just one-off issues. That solidarity, it appears, might just turn into action.

"In the six months since Tarana Burke’s #MeToo movement was resurrected on social media, there has been a tidal wave of truth-telling and dramatic transformation," said Barbara Lee, founder and president of the Barbara Lee Family Foundation, in a statement. "This research shows that a majority of voters feel strongly about the issue of sexual harassment and will take their opinions to the polls."