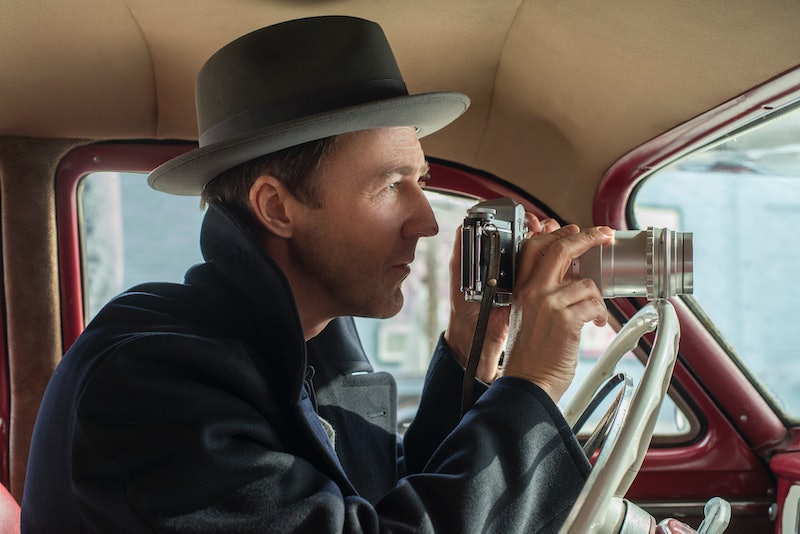 After spending 20 years in development limbo, Motherless Brooklyn finally premieres in theaters on Nov. 1. Star Edward Norton also wrote and directed this noir affair, which features private investigators, shady business deals, smoky lounges, and its fair share of murders and bloodshed. And while Motherless Brooklyn isn't directly based on a true story, there is one character who is inspired by a very real, powerful person who helped shape modern-day New York City.

Adapted from Jonathan Lethem's 1999 novel, Motherless Brooklyn tells the story of Lionel Essrog (Norton), a man with Tourette syndrome whose old friend and mentor, Frank Minna (Bruce Willis), is a private eye. Lionel has worked for Frank since he was a teenager, performing legwork related to Frank's cases. So when Frank is killed during a shady investigation, Lionel sets out to figure out who did it and why, ultimately finding himself at the center of a plot that reaches all the way to the top of New York's power structure.

These characters will be familiar to readers, but the film departs from the book in a few ways, one of which being its time period: Lethem's novel is set in the '90s, whereas Norton's film takes place in the '50s. It's in this shifted time frame that Motherless Brooklyn finds some inspiration from real life, according to Vanity Fair. Alec Baldwin's character, Moses Randolph, is based on the real-life Robert Moses, who, in his 1981 obituary in the New York Times was hailed as New York City's "master builder." He oversaw the construction of several of the city's most iconic structures and facilities, including Shea Stadium, Lincoln Center, and the United Nations Building (where he was more of a contributor than an overseer).

Randolph doesn't appear in the book, and his inclusion is touched on in Norton's explanation of why he moved the story to the '50s. Speaking to Vanity Fair, he said the time period encompassed "the secret history of modern New York, with all of its kind of institutional racism and the devastation of the old city from neighborhoods right up to Penn Station, perpetrated at the hands of an autocratic, almost imperial force, who was intensely antagonistic to everything we think defines American democratic principle."

That "autocratic, almost imperial force" can be found in Moses' redevelopment of New York City circa the latter part of his career, where he served as New York City Parks Commissioner and Construction Coordinator. Robert A. Caro's 1974 biography of Moses, titled The Power Broker, details just how many people the commissioner displaced. Per PBS, Caro wrote, "To build his highways, Moses threw out of their homes 250,000 persons — more people than lived in Albany or Chattanooga, or in Spokane, Tacoma, Duluth, Akron, Baton Rouge, Mobile, Nashville or Sacramento. He tore out the hearts of a score of neighborhoods."

Randolph is presented as having done similarly destructive work on the New York City of Motherless Brooklyn. Lionel's investigation leads him to Laura Rose (Gugu Mbatha-Raw), who Frank was following on his last case. As Lionel digs even deeper into Frank's case, Laura shares some context about her own experiences. "What happens to poor people in this city wasn't news yesterday, and it won't be tomorrow," she says in the trailer. In other words, the poor families who had been displaced to service one man's vision are functionally invisible.

This connection and the period backdrop provide interesting context to Motherless Brooklyn. It expands the story, turning one murder investigation into an exploration of deep-seated real-world issues around class and racial identity that are so often institutional in nature.

More like this
Gerard Butler Insisted On Adding This Pivotal Scene To 'Plane'
By Catharina Cheung
Jemima Khan Used Her Own Life As Inspo For 'What’s Love Got To Do With It?'
By Darshita Goyal
Kukulkan From 'Wakanda Forever' Has A Surprising Connection To Marvel History
By Grace Wehniainen
James Cameron May Come To Regret His 'Titanic' Door Experiment
By Stephanie Topacio Long
Get Even More From Bustle — Sign Up For The Newsletter
From hair trends to relationship advice, our daily newsletter has everything you need to sound like a person who’s on TikTok, even if you aren’t.