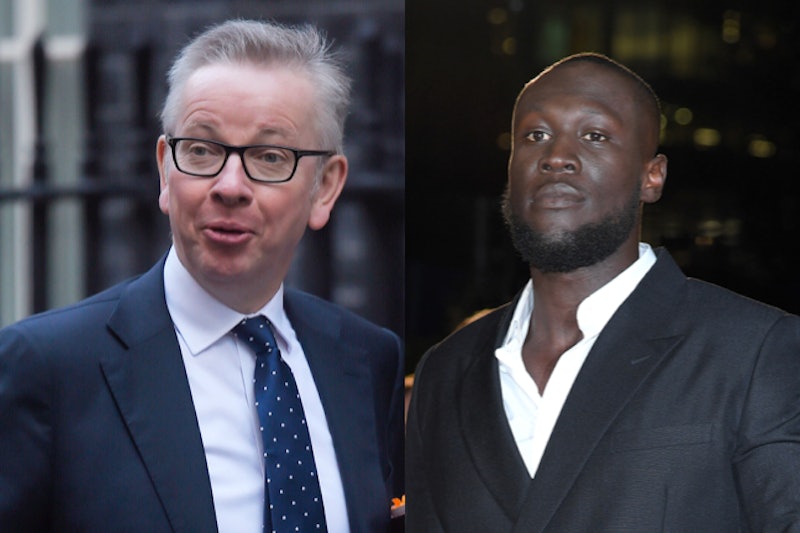 In a bad attempt to seem down with the kids, Conservative MP Michael Gove took it upon himself to criticise London Grime artist Stormzy’s endorsement of the Labour party by using his own lyrics. But Gove mocking Stormzy for supporting Labour has already received widespread criticism.

In an interview on Talk Radio, Chancellor of the Duchy of Lancaster was asked about Stormzy, who called Boris Johnson a “sinister man”. Gove said: “I think we again know that Stormzy, when he took to the stage at Glastonbury wearing a stab vest, he made clear what his political views were then.” Gove continued: “He is a far, far better rapper than he is a political analyst." On Twitter, Labour MP Angela Rayner responded to Gove’s comments saying: “And Michael Gove is crap at both.” To which he replied: “I set trends dem man copy”, which is a lyric are from Stormzy’s 2015 track Shut Up.

Stormzy headlined Glastonbury this year, making him the first solo black British man to take to the Pyramid stage, in a performance that was hailed as political. He wore a stab-proof vest designed by world renowned political artist Banksy as a commentary on knife crime in the UK. Labour MP David Lammy praised Stormzy for his headline performance in the summer saying: “@stormzy using his headline spot at #glastonburyfestival2019 to speak out about the injustice of young black kids being criminalised in a biased and disproportionate justice system. Humbled and inspired that he sampled my speech. Salute #Merky.”

In a statement posted to Instagram and Twitter on Monday, Stormzy explained why he would be voting for Labour in the upcoming election:

I will be registering to vote and I will be voting for Jeremy Corbyn. There are several reasons as to why I’m voting for him - I would be here all day if I began to list them...but in my 26 years of life I have never trusted politicians or relied on them to be the bearers of hope and righteous people that we’ve needed them to be. And for me, he is the first man in a position of power who is committed to giving the power back to the people and helping those who need a helping hand from the government the most. I think Boris Johnson is a sinister man with a long record of lying and policies that have absolutely no regard for the people that our government should be committed to helping and empowering.

Outside of his music career, the 26 year-old has set up #Merkybooks, dedicated to publishing a new generation of voices in the literary world, and created his own scholarship to help support black students at Cambridge.

More like this
The Families Of Grenfell Tower Are Still Waiting For Justice, Five Years On
By Bustle UK
5 Concrete Ways To Take Action Against The Rwanda Deportation Plan
By Rachel Mantock
Mollie King & Stuart Broad Have The Most Relatable Wedding Plans
By Sophie McEvoy
Boris Johnson’s Leadership Is In Question – Again
By Bustle UK
Get The Very Best Of Bustle/UK