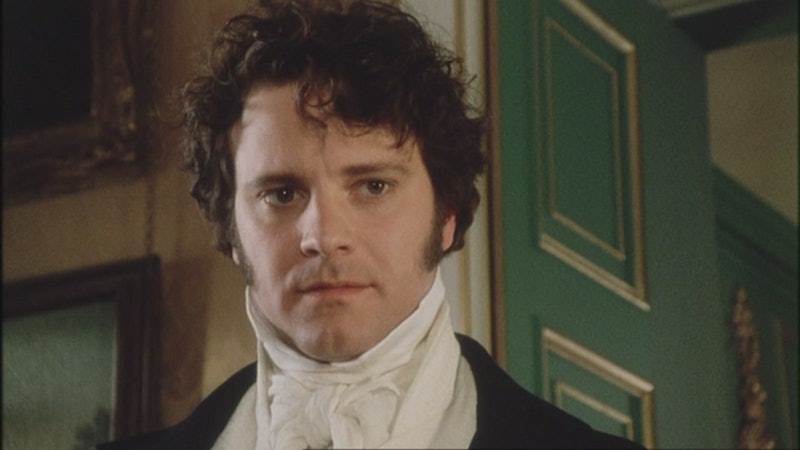 Searching for a period-accurate picture of one of literature's most lauded romantic leads, the Drama Channel has commissioned an authentic Mr. Darcy portrait that looks nothing like Colin Firth, Laurence Olivier, or Matthew Macfadyen. I mean nothing like them. Fans, understandably, are having a hard time coping with the news that Jane Austen's hero isn't the broad-shouldered hunk of their dreams.

Pride and Prejudice is set during the British Regency, in the early part of the 19th century, before Queen Victoria was crowned. In 1811, George, Prince of Wales was appointed Prince Regent after his father, George III — A.K.A. Mad King George, A.K.A. minor Hamilton villain — was deemed unfit to rule. Austen began writing Pride and Prejudice in 1796, but did not published it until 1813 — two years into the Regency Period.

At the time, "the most influential sector of society ... was the landed gentry." These families held large properties and relatively vast amounts of wealth, which were passed down through the generations according to "strict inheritance laws." The laws affecting the landed gentry's wealth were the reason the Bennett sisters needed to marry well — their father was unable to pass his inheritance along to them.

The gentry did not work. Although slavery was formally abolished in Britain during Austen's time, plantations in the colonies continued to use slave labor until 1833, and these plantations were the source of the landed gentry's wealth. Therefore, although we are used to seeing Mr. Darcy with "a tanned complexion, broad shoulders and muscular chest," these attributes "would not have been seen as attractive by Austen’s Georgians, signifying a hardworking outdoor labourer, not a gentleman of leisure."

Instead, the Drama Channel's experts determined the an authentic Mr. Darcy portrait should show "a smooth youthful complexion, with a small pointy chin and small mouth, under hair worn long but tied back and powdered white, as seen in many aristocratic portraits."

And so, it is this Darcy, not Colin Firth, who would have set Elizabeth Bennett's heart aflutter — and her teeth on edge. But at least he still has that winning personality?