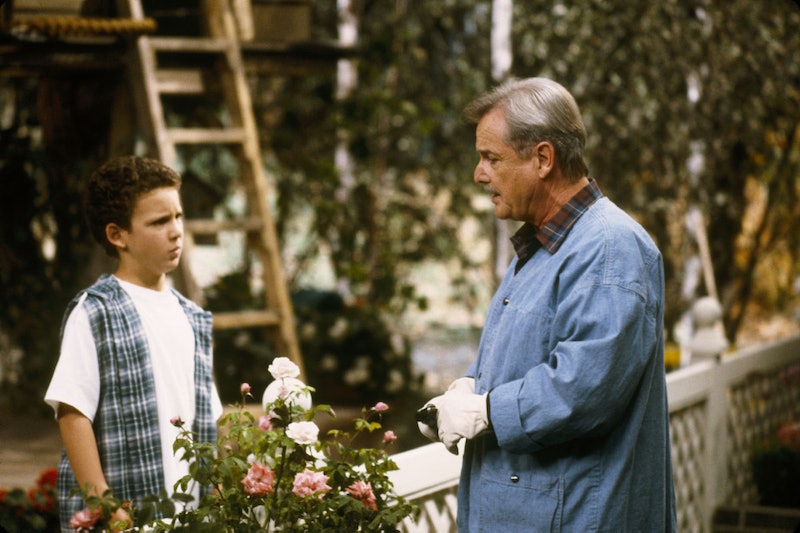 If you grew up with Boy Meets World, it can be easy to forget that the adults on the show were actors in a cast and not authority figures in your own life. At least, right up until you hear about the reason that William Daniels joined Boy Meets World. Daniels played Mr. Feeny, a teacher and later principal on the beloved classic, but the version of the character that's cemented into our brains isn't actually how Mr. Feeny was originally written. As he wrote in his new memoir There I Go Again: How I Came to Be Mr. Feeny, John Adams, Dr. Craig, KITT, and Many Others, the actor was initially reluctant to sign onto Boy Meets World because he didn't want to portray a bumbling teacher; he thought that would be disrespectful to the many hard-working educators for whom he had so much respect.

But Boy Meets World creator and executive producer Michael Jacobs thought he could write a version of the character that Daniels would resonate with, basing him off of a Shakespeare-spouting drama teacher from his own childhood back in New Jersey. Daniels was so unimpressed by the script after the first table read that he quit the show, at which point Jacobs asked him for 24 hours to mold the script into something Daniels could connect with; if he didn't like it after the tweaking, Jacobs would let him walk away without bothering him again.

But thankfully, that didn't happen. In Daniels' own words, excerpted from his memoir in Vulture:

"The new script had me deliver to my student, Cory, the facts of life, tying it into the importance of Shakespeare’s Romeo and Juliet, which my student was studying and hated: 'I live on the other side of the fence from you, Cory. It’s impossible not to face in your direction every once in a while and notice the people in the next yard. And through the years as I’ve gotten to know them, it is apparent they are fine individuals. But, their real strength comes from being a family. And do you know why they are a family, Cory? Because at one time a man and a woman realized that they loved each other and pursued the unlimited potential of what may come from that love, and here you are. There is no greater aspiration than to have love in our lives, Mr. Matthews. Romeo knew it and died for it.'"

It's a lovely speech, but it doesn't quite sound like the Mr. Feeny you know and love, right? It was enough to get Daniels to confidently sign on and stick with the show for its entire seven-season run, but the Shakespearean references were ultimately pulled by an ABC executive who was nervous that the lines would be "too intricate" and lose the audience. So, ironically, the very thing about the character that convinced William Daniels to add his talents to the cast... didn't actually make it to the screen. It would be like if the only reason Bob Saget signed on for Full House was because he was eager to work with the woman playing his wife, only to find the story tweaked, and himself playing a widowed father.

Obviously that change was slightly more central to the plot, but I still think it's so interesting that the actor's favorite part of Mr. Feeny was a backstory that the audience never really got to see. He was an omnipresent part of the series, playing a teacher, mentor, and neighbor, so I'm really glad he got what he needed out of that script tweak. The execs might have taken out the references to the Bard, but they couldn't remove Daniels' newfound connection with the role or his confidence in Michael Jacobs.

And, luckily, that rewritten script ensured us many years of Mr. Feeny, both in the original and far beyond, even to the modern reboot.