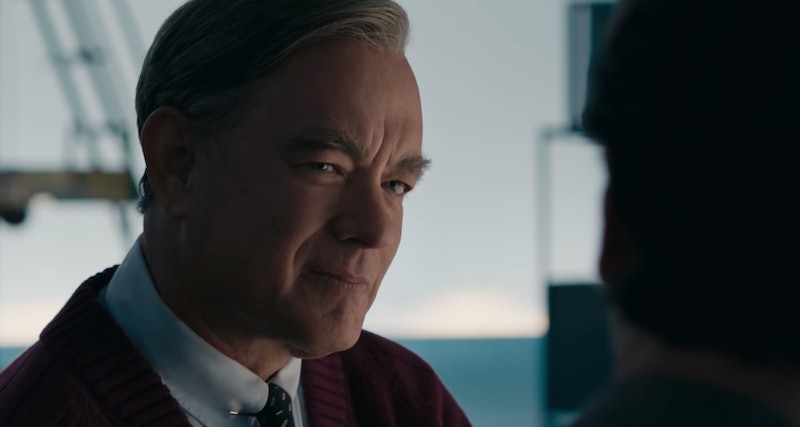 Creating movies based on the true life experiences of real people is its own special kind of complicated, and that goes doubly so if the person is as universally beloved as Fred Rogers, host of Mister Rogers' Neighborhood. A Beautiful Day in the Neighborhood, which opens in theaters on Nov. 22, attempts to do just that, and while early reactions from critics appear to be very positive, there's one review that's particularly worth paying attention to. So what does Mr. Rogers' widow Joanne Rogers think of A Beautiful Day in the Neighborhood? Thankfully, she seems to be a fan of the film's depiction of her late husband of 51 years.

Speaking with People, Joanne Rogers had only positive things to say about the idea of the film. "I think he would like this very much. There’s a wonderful energy there. It’s a very needful film right now," she said. Rogers also shared a fact about her husband that makes Hanks' casting all the more perfect. "One of the most wonderful things about this film is that Tom Hanks is playing Fred Rogers. Fred Rogers was a huge fan of Tom Hanks," she said, adding that the film is a "fabulous tribute to Fred."

While Hanks' Rogers features heavily in the film, the emotional core of the film is actually centered on Lloyd Vogel (Matthew Rhys), a writer who's sent to profile Rogers for a magazine. Their meeting and eventual friendship form the emotional arc of the story. Vogel is based on real-life writer Tom Junod, whose 1998 profile of Rogers titled "Can You Say... Hero?" in Esquire magazine was the inspiration for the film.

Speaking with CBS Pittsburgh, Rogers continued to heap praise on the film, saying, "I loved it. I think Tom [Hanks] is a genius, almost." She went further about Hanks' work, saying, "I want to give credit — Tom Hanks has gotten lots and lots of good press and he deserves every bit of it." Rogers also highlighted director Marielle Heller's work on the film, continuing, "[Hanks] has a remarkably good cast behind him and a fine director who really, really understood what Fred was about."

It's reassuring to know that the film — and especially Hanks' performance — wins her approval and then some. And there's one more coda to the Rogers/Hanks relationship. Access Hollywood found out that Hanks and Rogers are actually related, albeit distantly, and surprised Hanks on the red carpet premiere for the film with the Ancestry.com report that lists him and Rogers as sixth cousins. Commenting on the surprise connection, Hanks said, "It all just comes together, you see."