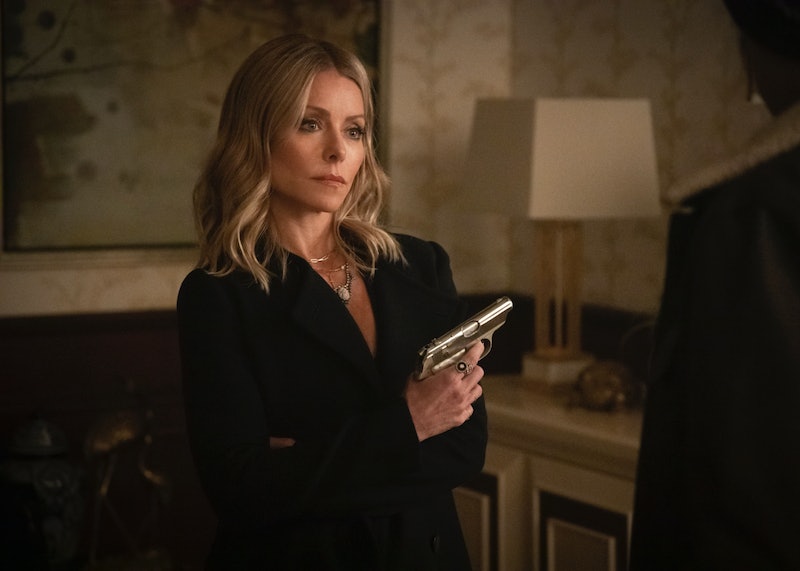 Though Riverdale is based on the beloved Archie comics, it deviates from its source material quite a bit. Not only has it turned the once-wholesome universe into a dark, murder-saturated thriller, but it's also introduced a few new characters throughout its three-season run. That includes new addition Mrs. Mulwray, who isn't in the Archie comics, but made her Riverdale debut in the Jan. 30 episode, "The Red Dahlia." However, the mysterious woman does borrow from another iconic story.

When the character, a health and sanitation inspector played by Kelly Ripa, was first announced back in November, she was described as "Hiram's alleged mistress." "Confident and tough," the CW's description read, per E!, "she's a beautiful, icy, femme fatale who gets caught up in a conspiracy that's much bigger than she initially realized." Mulwray's appearance in the "Red Dahlia" doesn't make her exact relationship with Hiram clear, aside from that he paid her to cover up evidence proving Sweetwater River was contaminated, but the use of "alleged" is suspicious. It could indicate that the writers are pulling the old bait-n-switch, tricking the audience into falling for one idea before revealing a story that's even crazier.

However Mulwray's storyline plays out, what we do know is that she shares a name with Faye Dunaway's character in Chinatown, as Maureen Lee Lenker of Entertainment Weekly pointed out. That explains all of the film noir motifs and other little Easter eggs in "The Red Dahlia." Lenkler even notes that the episode's final line ("Forget it, Jughead. It's Riverdale") is likely an homage to the film's famous ending: "Forget it, Jake. It's Chinatown."

As for Ripa, she told EW that she didn't make the connection between her character and the movie until well after filming had wrapped. "It didn’t even occur to me until about a week after I shot it," she admitted. "It sort of dawned on me because we were talking about Faye Dunaway doing Broadway. Then all of a sudden, it was like a lightbulb went off in my head ... but I was glad that I didn’t have the burden of that looming over me. She's tough shoes to fill."

Despite all the spooky, film noir build-up, Mrs. Mulwray only appeared in one scene in "The Red Dahlia." Does that mean it's time to bid adieu to this curious femme fatale already? Well, maybe not so fast.

Mark Consuelos, who plays Hiram and is Ripa's husband in real life, hinted to Vanity Fair that he thinks there's a possibility that Mrs. Mulwray could return. "It’s definitely not a closed thing... I think there's definitely opportunity for [her] to come back."

Ripa herself also rallied for a Mulwray reprise during her EW interview, but that doesn't mean she's interested in getting between the Lodges. "There is nobody I find sexier or more fun to work with than my husband," she said, before adding, "Although I will say that Hiram and Hermione are the best-looking couple on television. I say that all the time."

It's no secret that the parents are kind of killing it this season (literally and figuratively). Maybe the addition of one more willful woman is exactly the missing piece of the puzzle needed to topple Hiram's empire once and for all. And who knows, perhaps they'll even bring back Michael Consuelos, Ripa and Consuelos's son who played a young version of his father in "The Midnight Club," to wrap up this family affair.