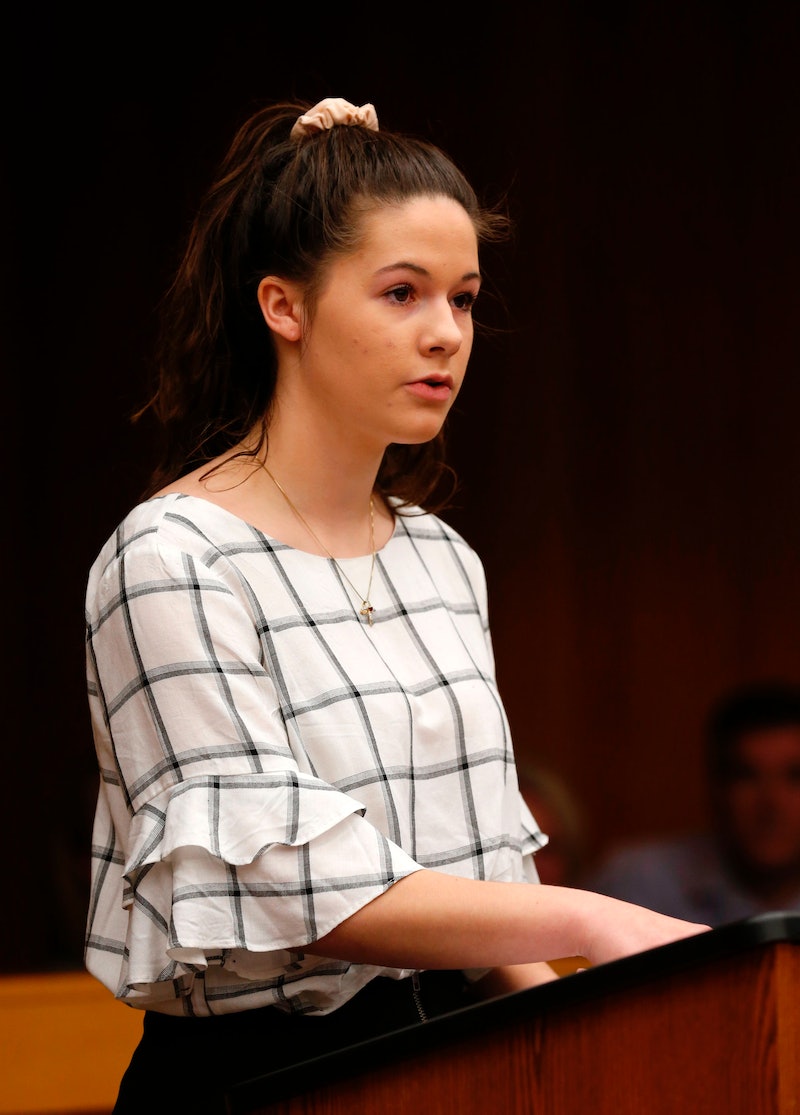 Katelyn Christensen started training at the Twistars USA Gymnastics Club near Lansing, Michigan, when she was 14 years old. Christensen says she “lived and breathed” gymnastics and regularly took part in competitions — until Larry Nassar, then a Michigan State University (MSU) physician, started treating her.

At the time, Nassar regularly treated gymnasts from Twistars. Christensen saw him in 2001 for treatment of a lower back injury, and Nassar sexually abused her during those appointments, according to a lawsuit against MSU. She didn’t tell anyone at the time. Instead, Christensen went into a shell as her relationship with her parents deteriorated; as she put it, she “self-destructed.”

“I just kept this hidden and it was eating me alive,” Christensen, now 32, tells Bustle. “But then [my twin sister] actually pulled me aside and said, ‘I know this happened to you. You have to heal, too.’”

Christensen’s twin, Kourtney Weidner, was also abused by Nassar when she was around the same age and similarly saw him to treat her back pain. She urged Christensen to come forward last year, following Nassar’s convictions for child pornography and sexual abuse charges. Weidner was part of a group of more than 300 survivors of Nassar’s abuse that reached a settlement with MSU in May 2018. Christensen decided to anonymously join a second wave of lawsuits against the school in September, which included 150 additional survivors.

But the university is treating these two groups of survivors very differently. More than 100 Jane Does are currently locked in a standoff with MSU over how the university wants to settle their lawsuits. The situation escalated in recent weeks as the survivors’ lawyers asked the state government to get involved. While the university agreed to pay an average of $1.3 million to each survivor in the first wave of lawsuits, the survivors' lawyers say MSU wants to settle this second wave for an average of less than $400,000 per person.

The survivors’ attorneys tell Bustle their clients received letters from MSU’s lawyers that pressured them to take these significantly smaller settlements so that the school could move on from the Nassar scandal and focus on rebuilding its image, even as its leaders make public apologies for how the survivors have been treated.

Christensen feels the university, like some of the abusive men she’s been in relationships with, is attempting to psychologically manipulate them in a pattern of behavior often called “gaslighting.”

“It’s exactly the same. It is a horrible cycle,” Christensen tells Bustle. “The abuse happens, you get the sorries, and the flowers and the gifts, and I’ll never do it again. Then they make you feel like it’s all your fault and you did this, you deserve this and have to deal with the consequences.”

In a May 16 letter sent to the state auditor general, attorneys for more than 100 survivors of Nassar’s abuse requested the office intervene. MSU’s approach to settling the second wave of lawsuits isn’t just disrespectful, they argued, it also violates the Michigan constitution’s equal protection clause. The attorneys argued in the letter that because MSU is a public university and not a private business, it cannot pay out a lesser settlement for the same kind of case stemming from abuse by the same employee.

“Each survivor experience is unique and MSU is committed to reaching fair settlements with all the claims,” Emily Guerrant, MSU spokeswoman, says in a statement to Bustle. “We continue to work diligently toward that goal.”

MSU has made these lower settlement offers to at least 107 second-wave survivors, many of them arriving at the beginning of 2019, according to lawyers for the women and girls. Th lawyers said they could not share copies of the offer letters due to confidentiality rules, but Megan Bonnani, a lead attorney for the second wave, described them to Bustle. She says the letters detailed each plaintiff’s case, included a proposed settlement amount, and listed ways the university would defend itself if the suit advanced in court.

They need to treat us equally, and realize we’re not afraid and we’re not going to go away.

The message implied to the women and girls suing in the second wave was clear: Take the low-ball amount that MSU is offering, or risk losing the whole case and getting nothing.

The survivors took the letters as “threatening,” Bonnani says. She recalled her clients asking her, “Why are they saying on one hand that they want to treat us with respect and acknowledge what happened, and at the same time, secretly, behind closed doors, sending us these letters?”

Around the same time that these settlement letters went out, Satish Udpa, MSU’s acting president, wrote dozens of survivors of Nassar’s abuse to ask if they'd feel comfortable with him apologizing to them by name at an April 12 board of trustees meeting, according to emails reviewed by Bustle.

Several of the Sister Survivors, as the group of women and girls abused by Nassar has become known, did show up for Udpa’s apology at the April 12 meeting and made their feelings exceedingly clear.

“The university shows one face to the public in their statements of support, and another face to us in their continuing refusal to resolve our cases,” survivor Nicole Cassidy said to the board of trustees. “I do not find it fair to be penalized for when I chose to [come] forward,” said Kelly Buchanan, another survivor.

Erin Blayer, a 17-year-old who was abused by Nassar between 2012 and 2016, asked each survivor present at the meeting to stand up. She then challenged the board to explain why they’re different from the first wave of survivors who sued the school. None of the trustees responded.

“They need to be transparent with what they’re doing,” Blayer tells Bustle. “All of this, quite frankly, is ridiculous. They need to treat us equally, and realize we’re not afraid and we’re not going to go away. We’ll go to how ever many meetings we need to.”

Blayer once dreamed of playing soccer, a sport she got involved in as a young girl, for MSU. When she was 11 years old, Blayer started experiencing severe back pain, and saw Nassar for help at his office on MSU’s campus, according to her lawsuit against the university. The abuse continued until summer 2016, when MSU put Nassar on leave after another woman, Rachael Denhollander, filed a criminal complaint against him. Nassar abused Denhollander in 2000 when she saw him for lower back pain, though other athletes had raised concerns to MSU officials years earlier, according to lawsuits.

“The fact that there were reports before I was born and the fact that they were shoved aside makes me sick,” Blayer tells Bustle. “Not one person should have to go through this — let alone 500.”

Blayer says her experience led her to stop spending time with friends, and she quit volunteering with a group of people with autism. She was diagnosed with major depression and severe anxiety, lost weight from lack of appetite, and had night terrors. “I still get about two to four hours of sleep because I’m scared to close my eyes because of the dreams I’ll have — or really nightmares,” she says. “There’s just something there that Nassar left behind.”

They write these letters and want to say sorry, but we’re all Sister Survivors and they’re not treating us like that.

Survivors of Nassar’s abuse insist MSU be held accountable for enabling him, and pay for their medical and therapy bills as well as their derailed career paths. More than nine in 10 of the survivors in the second wave of lawsuits were minors at the time they were molested by Nassar, and a majority of them were abused for longer than a year, according to an analysis by their attorneys. Forty-seven of them were abused by Nassar after July 2014, when Amanda Thomashow told MSU’s Title IX office that the doctor had molested her.

MSU settled the first wave of lawsuits last summer for $425 million, and a retired judge was hired to sort out how to divide up that sum among 333 women and children. As part of that settlement, MSU decided to set aside $75 million for any future lawsuits from survivors of Nassar's abuse, but there’s nothing stopping the university from putting more money into that reserve. According to attorneys for the survivors suing in the second wave, MSU trustees told the university’s lawyers not to negotiate another big lump settlement, and to instead make offers to individual plaintiffs from that pot of money it had already set aside.

The state auditor’s office responded to the survivors’ attorneys on May 24, declining to look into the settlement dispute and arguing that doing so would interfere with ongoing legal proceedings. Then on May 28, MSU announced that Samuel Stanley, Jr. would become its new president, moving to Michigan from his current post running Stony Brook University in New York.

Stanley did a round of interviews responding to questions about how he’d address fallout from the Nassar scandal. He said that MSU had previously committed an “incomprehensible betrayal of trust,” and pledged that his administration would be transparent and accountable. He also cited Udpa’s apology to the survivors as “a very important thing” that “really does make a difference.”

But the survivors themselves aren’t buying it.

“I really don’t believe anything that MSU says anymore,” Christensen said. “We just want to be treated the same, and we’re not treated the same. They write these letters and want to say sorry, but we’re all Sister Survivors and they’re not treating us like that.”

If the university doesn’t budge from its current position in the settlement talks, the cases in the second wave of lawsuits will start moving forward in the courts. That would activate the discovery process, which means that, for the first time, MSU may have to start revealing more about what it knew about Nassar and when.