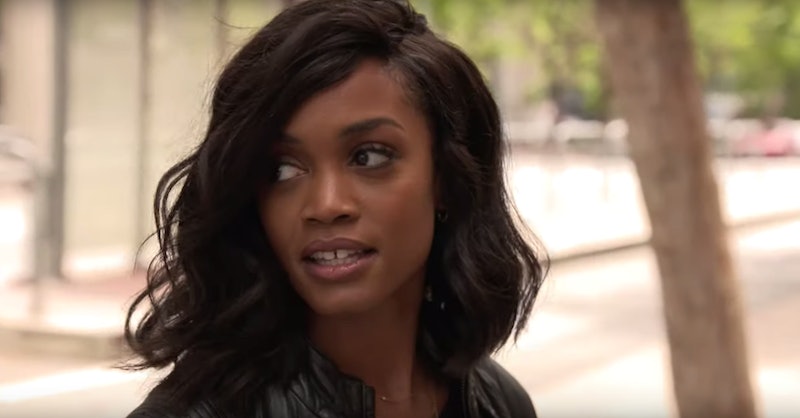 Rachel Lindsay has gone from asking men if they will accept her rose to running all over the country tracking down people who have ghosted other people. Along with Travis Mills, Rachel Lindsay co-hosts MTV's Ghosted, a new docuseries that investigates the mysterious turmoil haunting eight different relationships between friends, lovers, family, and more. For one reason or another, two people stopped talking to each other, and Lindsay and Mills channel their inner Nev Schulman and Max Joseph to find out why.

The co-hosts were united by a common experience — they were both once ghosted themselves. Lindsay tells Bustle that her experience as one of "the haunted," as the show calls them, affected multiple relationships that followed. "I eventually found out why this person ghosted me. But I realized, like in that two year span of not knowing, that I really was in a place that I couldn't maintain a serious relationship because in the back of my mind, I was always trying to figure out what happened," she says. "So to get that closure is everything."

But not everyone agrees that closure is always deserved. The release of the show's teaser elicited a slew of criticisms that suggested the show was romanticizing stalking, calling it "invasive" and an overall bad idea. But Lindsay assures that those reactions were rooted in total misunderstanding. She says that's not at all what the show is about. "We obviously are vetting out the people who reach out to us," she says. "And we're vetting out the people that are the ghosts. And we obviously want to make sure that we're not enabling anybody who’s an abuser or violent, or having people come and track down someone who’s a victim. That's not what this show is about. This show is truly about bringing awareness to this epidemic of ghosting."

That being said, she clarifies that violence and abuse are the only grounds, in her opinion, on which ghosting is acceptable. "I do think that there are okay times to ghost. If it involves, you know, some type of abuse or violence or something like that. You have to get away from that person," she says.

Still, the show's premise is that closure is necessary and deserved, when that isn't always the case in real life, whether there is some sort of abuse or not. And in real life, there aren't producers or casting directors to to ensure that a meetup is safe or consensual.

Then again, the subjects of the series are just as varied as the reasons why relationships come to abrupt ends. For example, the premiere episode's subject, Julia, is looking to rekindle a broken relationship with her childhood best friend, Delmond. At six months pregnant, she has no one to confide in or support her, and she wants Del to be in her son's life as a godfather. So Lindsay and Mills track him down to sit down and explain himself. The results are as cringeworthy as they are captivating.

"Every story is different," she says. "Every person that we encounter is different and it really is an emotional roller coaster because we're going through it with each person. We have no idea why the person got ghosted and we're investigating and finding out in real time with them."

She adds that the emotional ride of finding "ghosts" and being in Bachelor Nation were somewhat similar. "It's different from The Bachelorette in the sense that I mean, one, I couldn't really ghost them, you know, it was, 'You're not getting the rose, goodbye.' You may not understand why you got sent home, so maybe there's a similarity in that sense, because I don't have time to explain to each person ... but it is similar in the sense of having to have conversation and talk with people and understand people and navigate different relationships," Lindsay adds.

Now, if only more people could learn to use their words and have conversations with their friends, family, loved ones, or one night stands. Lindsay and Mills might be out of a reality show, but at least there wouldn't be so many "haunted" people wandering around looking for answers.