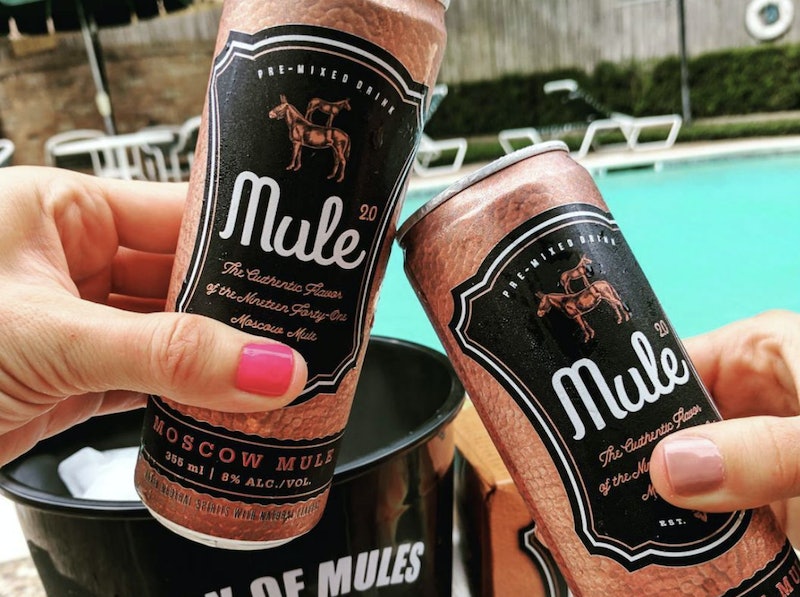 As much as you may enjoy drinking, you probably don't enjoy lugging around heavy glass bottles to whip up your cocktail of choice. Fortunately, it has never been easier to take your favorite drinks with you wherever you're going. In the last few years, wine in cans has become super popular —you can buy wine, including rosé, in cans from most major brands, which is amazing. But maybe you're someone who prefers a cool summer cocktail, and you'd take a mixed drink over a beer or a wine any day. Unfortunately for you, it's a lot harder to whip up a mixed drink when you're lounging on the beach or hanging at a picnic. Now, though, one company is making things a little easier: you can now buy Moscow Mules in a can. This is a major game changer!

Realizing that you can bring a Moscow Mule wherever you go (well, almost wherever you go) is great. Realizing you can do it right before the summer season? Even better. Moscow Mules, made of vodka, ginger beer, and lime, are super refreshing, light, and delicious — in other words, they're the perfect mixed drink for warm weather. And now you can bring a bunch of them with you to the pool or the beach, hassle-free. Sign me up!

These fun drinks are bought to you by a brand appropriately titled Mule 2.0, which is pretty adorable. The packaging is even more adorable: the copper-colored can mimics the classic copper mugs that a Moscow Mule is traditionally served in, so it really feels legit. The pre-mixed drink is 8 percent alcohol, and features an authentic flavor that is so good, you'll forget you're drinking something out of a can instead of a fresh drink you just got at a bar. They're gluten-free, and very delicious, with a natural ginger and lemon-lime flavor you'll really love if you were already a fan of the drink.

Mule 2.0 was created by Lisa Marlow in Houston Texas in 2014. Marlow, who was working as a geologist in Houston in 2014, fell in love with the Moscow Mule as it became more popular. According to the brand's site, however, she started to become "increasingly frustrated at inconsistency of preparation from place to place." Girl, I feel your pain. She became so frustrated, actually, that she decided to develop her own recipe.

She put in the work, the research, and the practice runs before coming up with the Mule 2.0. The site states that she "wanted to share the recipe with the world in the form of a convenient ready to drink can that can be enjoyed anywhere and not limited to drinking establishments. She wanted it to be spirits based to be true to its origin. Grain neutral spirits were used so not to bias toward vodka or gin fans."

The Mule 2.0 website even has some ideas on how you can make your Mule can your own, suggesting, "Combine Mule 2.0 with your favorite Irish Whiskey to make an Irish Mule, with Bourbon to make a Kentucky Mule, with Gin to make a London Mule, and with Tequila to make a Mexican Mule. Or you can add your favorite vodka to it to make it a slightly stronger Moscow Mule. Have a Mule party!" Okay, so, summer bucket list: make every single one of these variations on a Moscow Mule.

Where can you buy a can (or a few cans) for yourself? According to the website, these little guys are sold in stores nationwide, so finding one close to your location shouldn't be too difficult. You can use the Store Finder on the website to figure out the closest location for you. The Mule 2.0 cans are available as a 12 oz. single can, or as a four-pack. Cheers to summer, y'all.