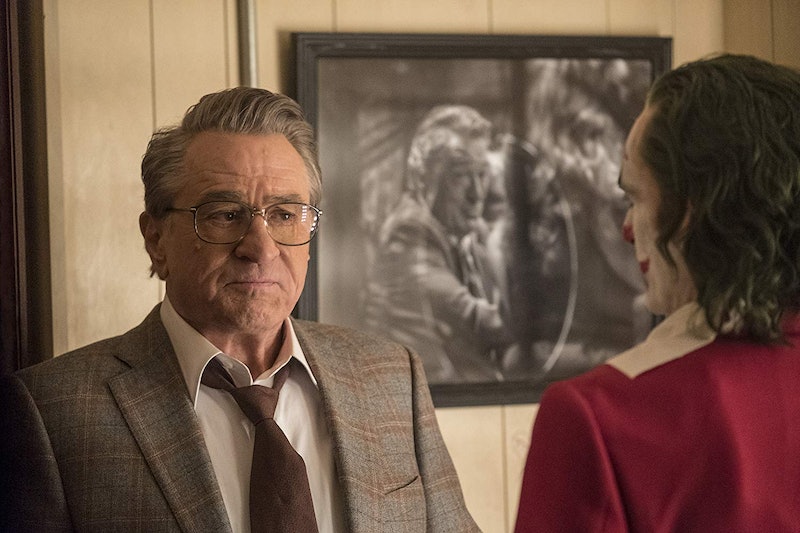 There are several versions of the Joker's origin story in the DC canon, and the standalone movie Joker, out Oct. 4, provides yet another. The Todd Phillips movie intends to give fans more insight into the villain by exploring a new identity: Arthur Fleck (Joaquin Phoenix), a failed comedian who finds that inciting violence gives him the purpose and notoriety he's searching for. Robert De Niro, meanwhile, plays the talk show host and comedian Arthur most admires. And while Murray Franklin is not a character in DC Comics, he was inspired by another one of De Niro's earlier roles.

"Bob [De Niro] really loved the script," director Todd Phillips told Empire Magazine. "I met with him and said, ‘I’d be lying to you if I said we weren’t influenced by a lot of your movies.’ I talked with him about Taxi Driver and about The King Of Comedy, which is one of my favorite movies of all time."

It's De Niro's role as Rupert Pupkin in 1982's The King of Comedy that seems to have made the biggest impact on Joker, which is set in the late '70s to early '80s. There are obvious parallels; the Martin Scorsese-directed dark comedy is abut a failed comedian who hosts an imaginary talk show in his mother's basement and eventually kidnaps his idol in order to land a spot on his show.

By no means is Franklin meant to be an extension of Pupkin, however. "There’s a connection, obviously, with the whole thing," De Niro told IndieWire. "But it’s not as a direct connection as the character I’m playing being Rupert many years later as a host." While Pupkin fails to achieve his dreams and resorts to crime, Franklin has the career Arthur wants; so it's Arthur who seems to be a spiritual successor to the King of Comedy character. According to Vox's review of the film, Fleck also fantasizes about being on his idol's show.

So Franklin is more related to De Niro's history than to DC's. However, he's not the first talk show host to appear. In the 2013 animated film Batman: The Dark Knight Returns Part 2, which is set 10 years after Batman has retired, David Endocrine (Conan O'Brien) invites a supposedly reformed Joker onto his show. The Clown Prince of Crime's appearance turns out to be disastrous, as he kills everyone in the audience, as well as Endocrine. However, none of the Joker filmmakers have referenced this storyline as a source of inspiration for Murray Franklin.

Phillips has said that Joker, as a whole, doesn't take inspiration from one particular plot. In an interview for Empire's August 2019 issue, he was quoted saying, "We didn’t follow anything from the comic books, which people are gonna be mad about. We just wrote our own version of where a guy like Joker might come from. That’s what was interesting to me. We’re not even doing Joker, but the story of becoming Joker. It’s about this man."

However, the filmmaker clarified this statement later on, and claimed in a post-screening Q&A, per ComicBook.com, that he was misquoted. "It’s actually not what I said," Phillips explained. "What I said was we didn’t take anything from one particular comic. We kind of picked and chose what we liked from the kind of 80-year canon of Joker."

With nods to the DC canon and some of the most gritty, acclaimed films of the '70s, Joker will definitely be an interesting watch, even for hardcore DC fans. And though Murray Franklin may not be a real character from the comic books, his role makes sense in this new interpretation of the Joker's beginnings.