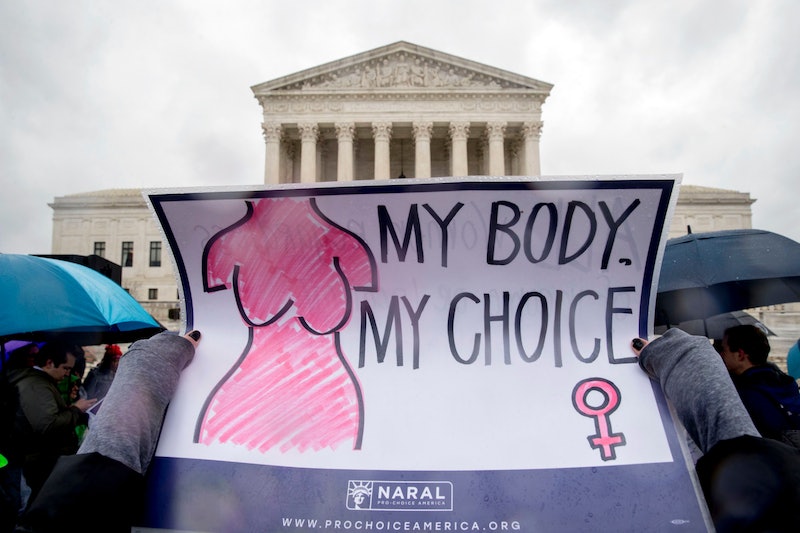 In this op-ed, Romper senior identity editor Danielle Campoamor explains why the Alabama abortion ban and other laws like it are so traumatizing.

Anti-abortion advocates have relied on a slew of sensational lies to justify stripping the constitutional rights of pregnant people. They claim abortion causes breast cancer and depression (it doesn't), or that a 13-week-old fetus feels pain and can be seen "fighting for its life" during an abortion procedure, as depicted in the anti-abortion propaganda film Unplanned (yeah, that's not a thing). Anti-abortion legislators use these lies to argue that abortion is traumatic and to justify outlawing the procedure.

And it's working. A reported 41 states have introduced more than 250 anti-abortion bills in 2019 alone. On Tuesday, the Alabama Senate passed the most extreme abortion ban in the country. The bill would make it a felony, punishable by up to 99 years in prison, for a doctor to perform or attempt an abortion during any stage of pregnancy. There are no exceptions for rape or incest. Prior to the bill's passage, Alabama lawmakers likened abortion to the Holocaust and other modern genocides. These lawmakers emphatically painted abortion as an unthinkable, traumatic event, one they argue they have a humanitarian duty to end.

But abortion is, for lack of a better word, boring. It's a common experience and, for many, not a particularly difficult decision. One out of every four women will have an abortion. In many cases, having an abortion assists people in becoming parents later in life, or allows them to continue parenting the children they already have (59% of the people who have abortions already have at least one child at home). Banning it shouldn't even be debatable: An NPR/PBS Newshour/Marist poll found the majority of Americans do not want to see Roe v. Wade overturned. And just 14% of Americans, and just 16% of southerners, believe abortions should be illegal in all cases, according to a survey from the Public Religion Research Institute.

My abortion was entirely unremarkable. I've had dentist appointments that were more dramatic. At seven weeks pregnant, I made an appointment at a local Planned Parenthood. I walked into the facility pregnant on a Saturday morning, and after filling out some paperwork, receiving some complementary counseling, and taking some time to recover and enjoy a rather delicious juice box, walked out happily not pregnant. Like most people who undergo any kind of routine medical procedure, I simply went on living my life afterward.

Two-thirds of all abortions occur at eight weeks gestation or before, and 89% occur within the first 12 weeks. A surgical abortion at that stage takes about 10 minutes, and in many ways resembles a yearly gynecological exam. It's among the safest medical procedures a person could have — studies have found a pregnant person is 14 times more likely to die as a result of childbirth than they are an abortion, and terminating a pregnancy is safer than removing a person's wisdom teeth or tonsils. Ninety-five percent of people who have abortions do not regret them, according to a University of California study published in the journal PLOS One.

Forcing a pregnant person to carry their pregnancy to term, however, is traumatic. Research shows that a person's inability to access abortion care can expose women to depression, anxiety and poor psychosocial adaptation. Studies have also shown pregnant people who are denied an abortion have a greater chance of living in poverty, and the resulting child suffers. With Alabama passing essentially a total abortion ban that makes no exception for rape or incest, survivors being forced to carry the product of unimaginable trauma to term is a real possibility, too.

It’s important to remember that pregnant people across the country can and will continue to access the abortion care they need, because it is a common, safe medical procedure. Abortion is legal in all 50 states, despite the recent passage of six-week abortion bans bills in Georgia, Ohio, Kentucky, and Mississippi. Abortion also remains legal in Alabama; the ACLU already vowed to sue the state, whose Republican governor is expected to sign the bill into law. But that challenge, of course, was always the point.

"This bill's purpose is to hopefully get to the Supreme Court and have them revisit the actual decision, which was, is the baby in a womb a person?" State Rep. Terri Collins, who sponsored the bill, told NBC News. "And we believe technology and science shows that it is. You can see that baby tissue develop all the way through now."

My abortion was easily one of the least traumatic things to ever happen to me. It allowed me to become a mother when I was ready, willing, and able. It gave me back agency over my body, a body that has been violated by men at various times throughout my life. It gave me the control others have attempted to steal from me.

Anti-abortion politicians aren't protecting pregnant people from the so-called trauma of abortion. They're inflicting trauma on pregnant people, and they're doing it with shameless impunity.