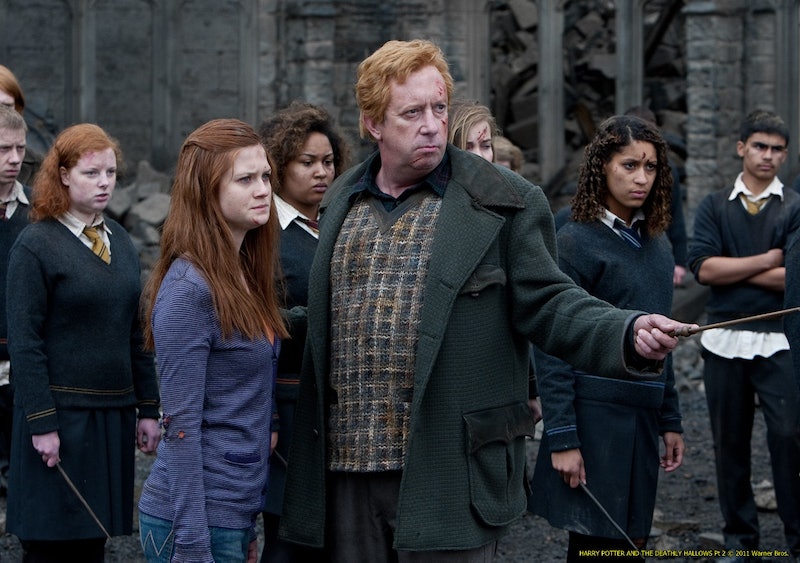 For most children of the '90s, Harry Potter was inescapable. I remember one particular birthday party of mine that was utterly ruined when a speed-reading friend spoiled Sirius Black's death for another child, causing a catastrophic meltdown. Harry Potter was serious business. Even our parents knew who most of the characters were. Growing up, I read all the Harry Potter books with my mom; she read them to me when I was younger (shout out to my mom for having a better Dobby voice than Stephen Fry or Jim Dale), and we read them to each other when I was older—often after I had already torn through the book once or twice.

My dad, on the other hand, referred to the Harry Potter books as "that book where the Dursleys go to the zoo," since that was about as far as he got in The Sorcerer's Stone. My mom and I spent years bugging him to finish the series, to no avail. We talked about the books constantly. We left them on his shelf. We even spent a family Christmas at Orlando's Wizarding World of Harry Potter (my dad did not read the books in preparation for the trip, but he did bring three Santa hats to the theme park and insist that we wear them for photos).

But now, in the year 2017, my father has decided that the time is finally right for him to join the rest of modern society and read the entire Harry Potter series. So, in honor of the series' 20th anniversary, here are a dad's thoughts on reading Harry Potter for the first time:

Firstly, a disclaimer that my dad has not yet finished the series. "I am only in the very early part of Harry Potter and the Prisoner of Azkaban, book 3," he says. "However, I have a (non-magic) trick whereby I put the dust jacket on backwards and place the bookmark on the bottom of the page, so as I walk around with it, it looks like I’m deep into the book. My plan is to keep reading until I’ve read them all."

This isn't the first time he's started the series, either. The first time around, he "got up to the part where Hagrid knocked down the door on the little island the Dursleys retreated to, to avoid the Owl-borne letters." He doesn't remember why he stopped, but somehow the book "got relegated to one of the many bookstacks that adorn my domicile."

And what made him finally start reading again? "A certain daughter of mine (she who is not to be named) has been cajoling me to read them since the books first appeared," he says. "I was a casual observer of this amazing Potter phenomenon, and I would bemusedly smile at this rush for reading, and help out with the Harry Potter birthday parties and all, but I never picked up the books. Somehow it reminded me of when I was roughly my daughter’s age and the Beatles first appeared (the rock group not the life form) and I just stood back watching it all, not feeling like joining the hysteria."

But my dad could only hold out for so long. "Recently, I went off for a 10 week job on the other side of the country and was confronted with a 'What books would I take to a desert island?' variation," he continues. "So I said 'it’s time' and I took the first three volumes of the Harry Potter Series."

And who does he identify with in the series so far? Dads, mostly. "When I was young and reading the great adventures available to me then (Treasure Island, Swiss Family Robinson, Robinson Crusoe, Huckleberry Finn, Kipling, Hugo, etc) it was always a question of who in the book I’d want to be," says my dad, who did not grow up in the 1800s despite that list of books. But now he chooses his favorite characters from a professional standpoint. "As an actor by profession, it is now a case of which character I’d want to play. I’m strongly drawn to Dumbledore, and certainly Hagrid, and believe it or not Dursley (father not son). I can imagine being cast as Dursley, and having to search for redeeming qualities (not finding any yet). I like all the Weasleys, but I’m drawn to the father and his curiosity about all things Muggle."

But, all dream roles aside, he has one clear favorite: "I’d say straight up my favorite character is… Harry. I love how he is the emotional core... He chooses fight not flight and, as Dumbledore says, 'It’s the choices we make in life.'"

Of course, my dad hasn't managed to entirely avoid the Potter Phenomenon over the years. He's seen most of the movies, but he thinks that is only adding to his reading experience.

"It’s interesting to have seen the movies before reading the books, because I appreciate the book’s details so much more knowing that seemingly unimportant things will have value and purpose later on," he says. "I do remember the movie end of the series, but I also think the excitement of Harry Potter is in the journey and not the ending. The triumph of it is on each page and not solely a whizbang ending."

And despite seeing the movies, reading the first three books, visiting the theme park, and throwing me a Harry Potter birthday party when I was seven, there's quite a lot about the series that is still new to him, like the Hogwarts houses.

"It seems a little like there's a good house, a bad house and two other houses." he says. "Ravenclaw I know nothing about, but the couple of Hufflepuffs seem decent and nice so far."

"Slytherins can be snarky and nasty but I think they have a respect for achievement, and perhaps unduly suffer from association with you know who," he's decided. "Weirdly Gryffindors are a little ill-defined. I’m avoiding going online to find out what house I’d be in, so as to let the books give me the info I need, but as defined by Harry and Hermione and Minerva M, there seems to be decent righteousness in Gryffindor. I have much to learn about the houses, but I know Hufflepuffs wear Canary yellow when they play Quidditch."

And what's his impression of Quidditch? "Quidditch is soccer meets the 'Surrender Dorothy' scene in The Wizard of Oz meets dodgeball meets curling meets that game the ancient Aztecs played where they had to get a ball through a little circle meets rugby meets butterfly catching," he says. "Except that if a seeker catches the very speedy Snitch he scores more points than either team and it’s all over, which begs the question of whether all the rest had to be played if catching the Snitch wins the day anyway?"

Of course, with anyone who's reading the Harry Books for the first time, you've got to ask whether it's living up to all the hype.

"Yes, yes, absolutely yes," says my dad. "It grabs you and brings you along. It has that most elusive of things: substance. As fantastical as it is, it is about human things."

He's also finding it far more adult and perilous than he thought it would be. "I’m surprised by how dangerous the world JK Rowling has created is. Nothing is soft pedaled, and the idea that the world and the school and the cute little elves and the pixies all can rear up and snap at you at any time is thrilling. Even the trees and plants in Herbology are threateningly deadly."

Nothing has been too confusing so far, though. "I’m only confused about how the Dursleys got off that little island," he says. "I may have missed it but is seems like they were left there with no boat. Sorry, but I worry about the Dursleys."

In the end, though, stranded Dursleys or not, my dad is enjoying his first real trip to the Wizarding World. "I now have something to say to the younger generations besides 'Get off my lawn!' I feel a bit more knowledgeable and understanding about this obsession so many people have," he says. "I now know that Azkaban is something more than a really poor job of spelling Nebraska backwards. I kind of would love to have a wand. I look forward to the many surprises yet to come. I’m glad I’m reading it (PS I love the Beatles now also). And above all I’m glad my daughter made me read them."