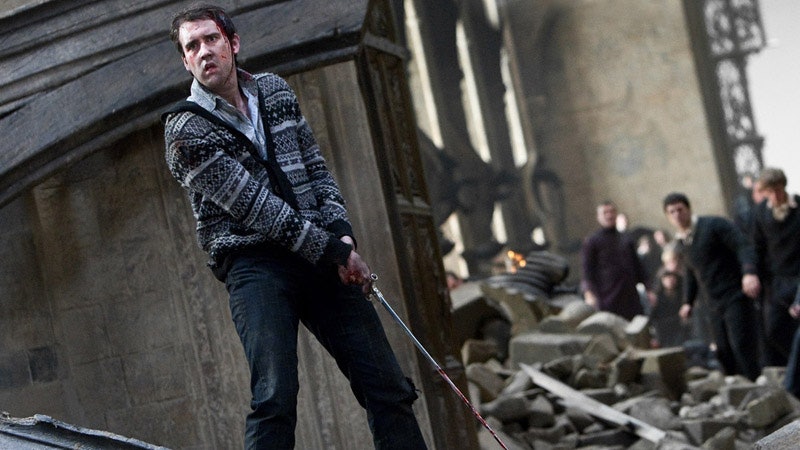 J.K. Rowling's Harry Potter series is chock-full of otherworldliness: magic, ghosts, centaurs, prophecies, giants, et cetera. The truly unbelievable part, however, has nothing to do with talking portraits or haunted bathrooms, and everything to do with the series' criminal lack of telenovela-style romances.

What was Rowling even up to? She created all these rich, marvelous, nuanced characters, but for the most part failed to make them sexually attracted to each other. I weep for the lost romances, steamy hookups, and terrible first-date stories. Rowling obviously committed a grave crime against us, her insatiable fans. But, luckily for us, her error is not an irreparable one. Rowling prepped the raw material — several thousand pages of prose developing hundreds of distinct characters — and now it's time for us to do the real work.

Who, objectively, is the most dateable Harry Potter series character? Who would you take home to your mother, and who would try to torture you into insanity? Who wouldn't even make a decent friend, and who should you marry ASAP? These are the great questions of our time, people!

Verdict: Umbridge makes your heart pound with terror and rage. She’s a scheming, malevolent she-devil. A cursed and crumbling mummy would make a better romantic partner. Report her to the proper authorities.

Cons: Too stupid to be morally repugnant. Sadistic and easily manipulated.

Verdict: Leave him to die in an inferno of his own making.

Cons: Textbook sociopath. Incapable of love and amused by others' suffering. Has tortured and killed countless innocents. Best friend is literally a snake.

Pros: Not totally devoid of humanity.

Verdict: If Peter had been born in less volatile times, he probably would've grown into a weak-willed but generally harmless man. Even so, Peter's the sort of guy who's easily tempted, and he'd spend more time justifying his sliminess to himself than he ever would apologizing to you. Don't trust him, and back away.

Pros: Close with his parents. Has never committed murder.

Verdict: Not even worth a second glance. Forget he exists.

Pros: Will always love you. Always.

Verdict: Snape joined a genocidal terrorist group with eyes wide open. True, he turned his back on his murder buddies after they started hunting his one true love, but how much did he really change? Even if you could live up to Snape’s idealized memories of 15-year-old Lily, leave him alone to brood in peace.

Cons: Extremely practical — as in, willing to enable the abuse and murder of children to save a society. Prefers infuriating vagueness to direct, honest conversation. Super old.

Verdict: He might not have the most precise moral compass, but he does have a lot of kindly-old-person charm, if that’s what you’re into. If you can overlook his more questionable activities, share a pot of tea in his squishy armchairs.

Verdict: Even if you could disregard her grossly inappropriate comments about the male form, this relationship could never advance beyond bathroom conversations. Stay on good terms, but don’t get too friendly.

Cons: Self-important, self-righteous, and self-centered. Little to no sense of humor. Disloyal. And most damning of all: intensely, unsalvageably boring.

Verdict: Percy tries to do the right thing, but his motivations are usually rotten. Still, he’s not terrible, especially after extreme circumstances force him to reexamine his lousy life choices. He might make a good work colleague or in-law, but otherwise keep a friendly distance.

Pros: Loyal, always there for you when you need him.

Cons: Doesn't like to take no for an answer. Bit of a nag. Overprotective.

Verdict: Look, Dobby is a great guy, alright? But he's also annoyingly clingy and a chronic name-dropper, and he'd almost definitely drive you up a wall if you dated him. Friend him, but make sure you establish some boundaries.

Verdict: Rowling claims that Malfoy is irredeemable, but let’s be real: who isn’t attracted to the challenge of turning a dangerous monster into a dangerous lover? If you’re into thrilling bad-boy hotties and not too put off by the vindictive nastiness, friend him before dating him. He needs some good influences in his life.

Cons: Literally never does anything wrong.

Verdict: Cedric is too good. Dating him would be exhausting (you'd have to choke back every unkind comment and off-color joke), and even friending him would induce an inferiority complex. Admire from afar, but don't subject yourself to his white-knight flawlessness.

Cons: Has the maturity level of a man who’s been in solitary confinement since age 22. Poor planner, subpar hygiene. Reckless. Moody. Holds grudges.

Verdict: True, Sirius is the best, but he also has a lot of issues. Only the most compassionate, patient, and even-tempered individuals need apply. But if you’re willing and able to stick around, cuddle him. He needs it.

Verdict: On paper, Hagrid is exceptionally dateable. However, his terrible choices and inability to keep secrets make for subprime dating material. Unless you can live in very close quarters with dangerous creatures and are attracted to his sheer physicality (he’s over eleven feet tall!), best-friend him.

Pros: Straight shooter. Knows how to handle himself.

Verdict: You could never take Mad-Eye home to Mom and you'd probably never even let him meet your friends at a bar, but even so — there's something there, something edgy and exciting. Friend him, with benefits. You'll definitely regret it, but you'll (probably) still have fun.

Cons: Prone to jealousy and overcompensation. Low self-esteem. Purportedly has the emotional capacity of a teaspoon.

Verdict: Ron grew up with feisty, intelligent, opinionated men and women, so he’ll be bored by dispassionate or unassertive suitors. If you can keep him on his toes, boyfriend him... carefully. Hermione knows about a zillion spells, and you do not want to get on her bad side.

Cons: May overlook basic questions (How was your day? Did you murder our best friends?). Turns into a bloodthirsty beast once a month.

Verdict: When someone is constantly told he's a monster, he's going to start to believe it. Lupin undervalues himself, and it'll take a lot of work to convince him that he's worthy of your friendship, let alone your love. But if you can get through to him, enjoy a long engagement together. Keep reminding him that he's a good man and a total catch.

Pros: Kind, compassionate, and somehow always says the right thing. Conversant in nearly every subject, especially the nonexistent ones.

Cons: A tad spacey (may forget important dates and names). Probably gets your joke, but doesn’t think it’s funny.

Cons: Sense of humor can be unkind. Lazy and cavalier about nearly everything that doesn’t involve mischief.

Verdict: If you’re easygoing, forbearing, and good-humored, boyfriend him. Don’t stick around if you can’t handle his chronic depression. George deserves the best.

Pros: Great sense of humor. Knows what she wants and fights for it. Smart.

Verdict: Tonks isn’t willing to compromise on her dream partner. But if what she wants is you, then you already know what to do: stop rebuffing her and wife her immediately.

Pros: Loyal, generous, intuitive, and athletic. Has great eyes (as green as a fresh-pickled toad).

Cons: Tends to bottle up his feelings, sometimes resulting in explosive outbursts. Might unilaterally decide what’s “best” for your relationship and act on such decisions without consulting you. Terrible with money. Incapable of avoiding near-death experiences. Messy.

Verdict: Sure, the Boy Who Lived will always get more attention than you, but he’s a genuinely good dude. Forget the throngs of stalkers, ignore his death-defying lifestyle, and spend a wild weekend with him. That boy needs to learn how to relax around potential mates.

Verdict: Minerva suffers no fools, and every iota of her loyalty and affection is hard-earned. If you can win her respect and love, though — if you're hardworking, decent, and brave — you've basically won at life. Propose to her in Scotland, and wife her ASAP. (Bonus: Witch in the streets, kitten in the sheets...?)

Cons: Way smarter than you. Love of rules and order can be a downer. Doesn’t have the best sense of humor.

Verdict: Hermione is intolerant of stupidity, superstition, cruelty, and prejudice. She doesn’t require a whip-smart partner (she’s used to being the smartest), but she does want someone who’s kind and cares about right and wrong. If you think you can make each other happy, shower her in rare books. Then wife her.

Cons: Would probably always compare you to Harry Potter. Has about eighteen (sorry, seventeen) overprotective older brothers. Overfond of hexes.

Verdict: This girl has high standards, and she knows what she wants. If you can win her heart, wife her.

Verdict: Those cons are total jokes — toad or no toad, Neville is a dream. We’re taught never to change ourselves for a dude, but this is Neville Longbottom. Do whatever you have to do to husband him forever.