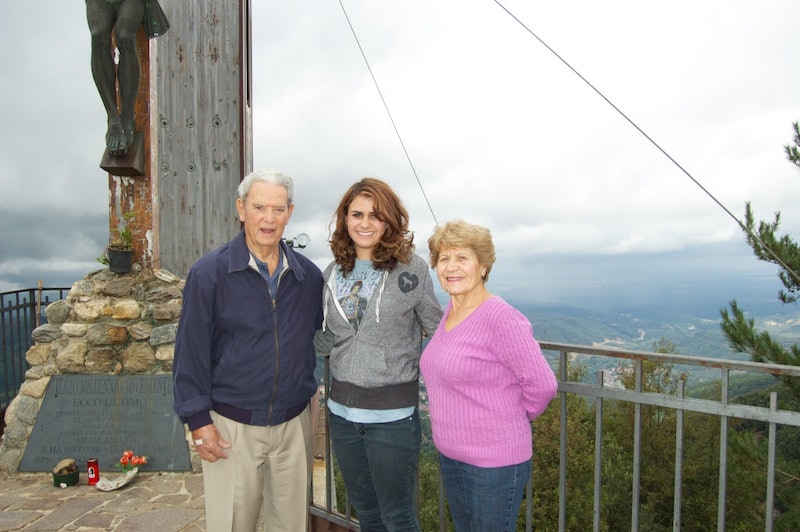 On Christmas Eve this year, like every other year, my family will start with the clam dip fresh out of the oven. As the clam dip cools down there's the "pizza" (really just bread with stuff on it) and some salami to snack on, as well as two plates of zeppole (one stuffed with chocolate, one with anchovies — pick carefully). Around 3 p.m. we'll get to the dinner table and start in on the manicotti, with an extra saucer of tomato sauce so you can personalize it, of course. Then there's the potato croquettes, the lamb, the fish, and, finally, the cream puffs, tiramisu, struffoli, and ubiquitous panettone.

Last year, my aunt couldn't make it up from her new-ish home in North Carolina to our house in New Jersey, so I took notes as my grandma — my nonna — made the dip, and then I emailed my aunt the recipe so she could make it a couple hundred miles away. No matter where we are, no matter who's around the table, for my family, Christmas Eve starts with clam dip.

Around 1970, my grandparents moved themselves and their three kids from deep south Italy to Brooklyn, New York. Together, they learned English, went to school, became successful at work. My grandmother tailored wedding gowns at the original Kleinfeld Bridal while my grandfather — my nonno — was a contractor, both turning other people's fantasies for their lives into realities. They built the infrastructure on which my two sisters, our four cousins, and I have built our own lives.

It's an infrastructure founded on tomato sauce (preferably made with tomatoes from the backyard canned at the end of summer). When I was born, my parents were at the beginning of a decade-long stint in Missouri. That made Christmas an extra special treat; every year we got to go to New York and stay at my grandparents' cozy house with additions and a magical treehouse in the back built by Nonno.

First we were joined by one set of cousins, then my uncle got married and we had one more member, then they had kids and we got more cousins to act silly with. We'd add an extra table to the dining room, make room for another table setting, and then Nonna would catch Nonno dipping a piece of bread into the pot of tomato sauce for the manicotti and he'd look admonished but then give a bite to one of the cousins to enjoy.

After my family moved back to the East Coast, we were all around each other in the tristate area for a while. But as it's wont to do, the family kept evolving. Marriages changed, significant others showed up (and one turned into a husband), in-laws requested a year for themselves, cousins went to college and moved away after graduation.

In 2014, my grandparents moved south because Nonno liked the warmth, and three months before Christmas, he died. I can't describe how much we missed my grandpa that year and every year since, but I can tell you the crusty bread softened perfectly as my grandma dipped it into the pot still on the stove to absorb the smooth, simple tomato sauce.

The people around the table and the location of the table has changed every year, but the food remained the constant, and it remained delicious. Over the years, other family members picked up Nonna's recipes or made a specialty of their own so it wasn't all on her to make everything, but the staple foods are always there.

I've been committed to learning my grandmother's recipes to keep up the traditions (and deliciousness), and our banter while she was making the clam dip last year followed a now-familiar pattern.

"However much you need," she shrugged.

"Until it's done," she shrugged.

Cooking, for my grandmother, isn't so much a set of steps as it is an intuitive flow. She doesn't need to calculate how much lemon juice to add to the clam dip, just as she doesn't need to calculate when you need her to roll her eyes and call you a name in the Calabrese dialect that somehow communicates in one word that everything will end up fine as long as you've got family around and don't forget the hot sauce for the dip. (How much hot sauce? "As much as you want.")

More like this
10 Pumpkin Recipes That Are Way More Creative Than Pie & Lattes
By Rebecca Deczynski and Alexis Morillo
On TikTok, Tinned Fish Date Night Is The Latest Viral Food Obsession
By Emma Carey
The 19 Best Tweets & Memes About Bisexual Awareness Week
By Lexi Inks
UK Audiences Will Soon Be Able To Watch 'The Bear'
By Frances Stewart
Get Even More From Bustle — Sign Up For The Newsletter