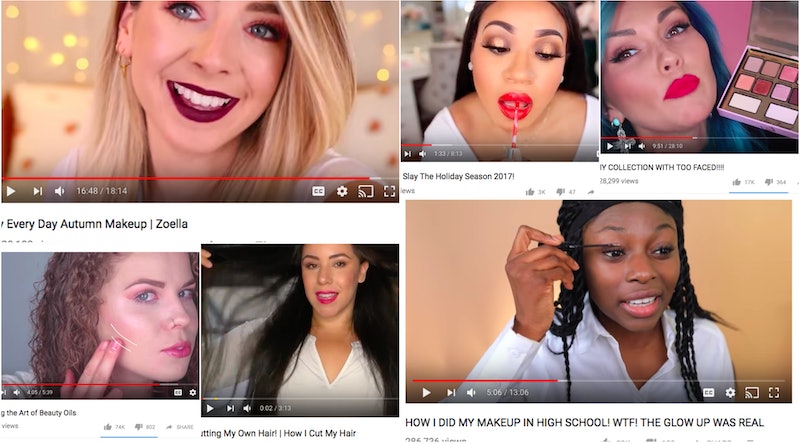 I remember the first time I came across a makeup collection video embedded in an article I was reading. It was filmed by Zoella, a YouTuber with 11 million subscribers and perfectly highlighted hair. She reminded me of the popular girls that went to my high school. I clicked. The video began to roll. Zoella delivered her signature "Hello everybody!" in a way that felt both canned and like she was speaking directly to me.

My eyes bulged at the first sight of her vanity, which was essentially a miniature Sephora.

I experienced something akin to the five stages of grief that evening. There was denial (How is this a thing? Who would watch this?) anger (This has millions of views! We really are just the puppets of capitalism!) bargaining (If only *I* had created a YouTube channel when I was 14) depression (I'm sitting here watching this with pita chip crumbs on my sweatpants) and, finally, acceptance (Well that was weird — let's watch one more to make sure it wasn't all a dream).

Several hours later — or at least it felt like hours — I blinked the blue computer light from my eyes, now fully indoctrinated into the cult of the beauty vlogger. Somewhere between the first video I watched that night and the last, my horror became fascination became awe. I began to worship at the well-manicured altar of vloggers like Jaclyn Hill and Arden Rose.

I love being alone, but I hate being lonely, and this was the solution: Dozens of digital best friends who would keep me company and talk to me about clothing and makeup on demand. When I paused, they paused. I didn't need to think about their real lives; all their problems, quirks, and breakouts were filtered through a screen. But not too filtered; they left enough visible blemishes to make them seem relatable. I was hooked.

Or, I should say, I am hooked. I have no business using the past tense when last night I streamed all 49 minutes of Jessica Braun's Makeup Collection | 2017. My favorite genres are fashion hauls and makeup "declutters," where the YouTuber spills their stash onto the floor and goes through it piece by piece, deciding what to keep and what to give away. It feels almost productive, as if watching these women (or men!) throw out two-year-old bottles of foundation can help me achieve minimalist nirvana.

There's nothing inherently wrong with this, of course, but it's easy for me to take YouTube marathons to the extreme. I find them so soothing. It's like free therapy, without the bills or the pesky "actually dealing with your anxiety for once, Erin" part. Not to mention that the amount of content available is truly endless. I subscribe to over 20 channels, most of which update with several new videos per week, in addition to the hundreds they've already uploaded. It would be entirely possible to spend the majority of my life watching other women live theirs.

Watching beauty and fashion videos is different from watching television or movies. There's no emotional investment. The stakes are low. Unlike a Netflix series or Oscar-nominated film, there's no on-screen drama and I don't have to worry about anything bad happening to my favorite characters because, well, we're just here to talk about lipstick.

Still, there is something about the beautifully produced content these people create — and don't get me wrong, it is extremely impressive — that leaves me feeling especially lost. Much of this is to the YouTubers' credit. They make it look so easy, like it could be me on the other side of the camera, if only I had professional-grade video lighting in my living room, better hair, and more discipline.

The first time I saw a YouTuber I followed in person, it was disorienting. I almost didn't recognize her, but I had that same wait, is that...? moment that you sometimes experience in New York when you realize you're standing just a few feet away from a celebrity. You feel it in your gut before you realize it's them.

We were both being shuffled through the crowd entering a New York Fashion Week runway show and I kept sneaking glances at her while pretending to be engrossed in my email (in reality, I had no service, no idea where to find the WiFi password for the event space, and not enough confidence to ask any of the intimidating, dressed-all-in-black staff members).

Up close, she looked the same as she did on camera, only her foundation seemed a little heavier, her clothes a little bit more rumpled. We lived in different worlds in my head: I on regular 'ole Earth, and she on the glamorous Planet Success. Yet here we both were, invited to the same event. Maybe we weren't so different, after all.

When I think of that moment, I'm reminded of a quote from Neil Gaiman's American Gods. Spoken by the character of Jesus (yes, really) near the end of the book, it goes like this:

“Have you thought about what it means to be a god? It means you give up your mortal existence to become a meme: something that lives forever in people's minds, like the tune of a nursery rhyme. It means that everyone gets to re-create you in their own minds. You barely have your own identity any more. Instead, you're a thousand aspects of what people need you to be. And everyone wants something different from you."

We idolize online influencers the same way we idolize more traditional celebrities, and for a similar reason — they've allowed themselves to be immortalized on the other side of the screen or the magazine cover or the radio. But sometimes when we see them up close, we run the risk of realizing they are just human.

For me, that truth is harder to deal with — if famous people are "just like us," then why aren't we just like them.

That urge to compare myself is heightened with social media stars because their success is built on seeming "regular," only with a wardrobe and makeup collection that most would dream of owning. It's part of why fans trust their opinions so much — according to AdWeek, people are almost as likely to take recommendations from influencers as they are from their friends.

I have nothing but respect (and, sure, a little jealousy) for anyone who makes a living this way. That's where my addiction stems from — part of me believes that if I just watch enough of these videos, perhaps a fraction of the determination and drive these women possess might rub off on me and I could become one of them.

Couple this with my passion for procrastination (why get done today what you can put off until it's basically your full-time job to complain about not having done it yet?) and you have the recipe for igniting the fire of my anxiety and depression. Watching YouTube is relaxing until suddenly it's not. The habit aids my self-sabatoge like nothing else, gives me an easy out so that I don't have to face the hard reality of working toward my goals.

As I stood beside this moderately famous YouTube celebrity at NYFW, I realized the primary difference between us was this: she made videos and put them online, while I did not. She released her work out into the world, and I obsessed and fretted over not creating the art I really wanted to create. Maybe the problem wasn't YouTube — maybe the problem was me.

I still love watching beauty videos and I probably always will, at least until the next big thing comes along. But perhaps it's time I learn to hit pause.