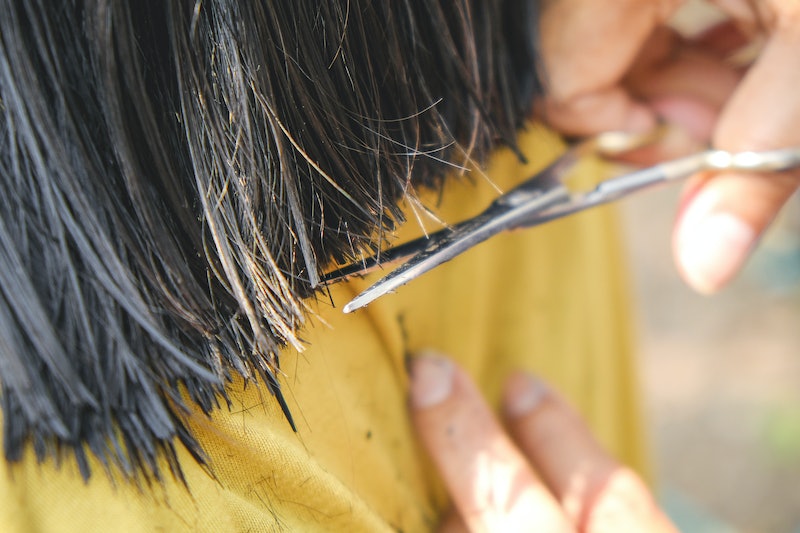 I’m sitting on the edge of the bathtub, my hair gathered into a braid with ties at either end, the same way I keep it from flying in my face on a run. Meanwhile, my boyfriend’s standing behind me wielding a pair of kitchen scissors, serving a casual Tether look with his newly buzzed head. Two seconds later, 12 inches of my underboob-length waves drop into the tub.

It took a grand total of three weeks of social distancing to decide to cut each other’s hair. (A beautiful metaphor for a trusting relationship that’ll 100% make it into our hypothetical wedding vows!) It wasn’t an especially chaotic choice: He wanted a haircut, then I wanted one. Without a clear end to social-distancing policies in sight, DIY haircuts are both a utilitarian activity and a creative way to waste 20 minutes, provided you don’t mind your stylist’s judgment when they eventually have to fix it.

Peter wasn’t due for a cut for another week when, post-stationary bike ride a few Sundays ago, he said he wanted a trim. As long as he set up the guard on the electric razor, I said, I could do it. I felt an inordinate degree of confidence — hell, I buzzed a roommate’s hair in college! I could do anything! So I didn’t lose my cool when I saw the little tufts fall off the pale of his scalp and onto our bathroom floor. When I stepped back, he had a certain Gerard-Butler-in-Tomb-Raider-2-ishness about him.

Later, however, he confessed he was nervous for me to shear him like an Easter lamb. “I’d never seen myself with a buzz cut before,” he told me, although this wasn’t his first non-professional pruning. “I trusted you to not fuck it up because I feel like you have an investment in how smart and/or stupid my hair looks, though I was afraid that maybe you wouldn’t like it and then there was no going back.” (To confirm: it looks basically good for a DIY haircut.)

I’m happier still that Peter’s the only person who will see the ridiculous back of my head for at least the next month.

He was similarly jittery when I asked him to cut my hair after I downed a gin and tonic over my mom’s Zoom birthday party last Saturday night. (“I didn’t want you to be mad at me if I messed it up,” he said.) The decision was a bit of an about-face; I’ve kept my hair long since growing out my bangs in college, even as friends pressured me to cut it. But in this new, socially distant normal, I got tired of it getting caught under my shoulder when I rolled over in bed, or knotted from spending all day at my sweet new workspace, the couch. If drunk words are sober thoughts, then my subconscious was ready for this transformation; it took about 30 seconds from me saying, "Cut my hair" to the deed being done.

When he pulled the scissors away and my hair fell just above my shoulders, I was surprised by how good it looked: Finally, I had achieved my Amelie dreams! It wasn’t until I swished it around that I realized there was an awkward step where the two strands of braid diverged. The hair growing from the nape of my neck recalled Monet’s Haystacks; individual pieces hung at choppy, uneven lengths, having cleverly evaded the scissors. I called on the skills I honed as a middle-school scene kid to adjust it. Grant me the serenity to accept the things I cannot change, I thought, running my hand over the back, and the courage to change the things I cannot accept, trimming the stragglers at the front. Net-net, I’m happy with the cut, although I’m happier still that Peter’s the only person who will see the ridiculous back of my head for at least the next month.

Being able to trust my partner to cut my hair in a gin-soaked moment of truth foreshadows the two of us making it out of this crisis together. Yes, we can stand each other’s company, and only each other’s company, for the unforeseeable future. But we can also make each other laugh, take care of each other, and not get mad when we sort of mess up. That, baby, is a partnership.

More like this
Glossier’s New Olivia Rodrigo Campaign Is Giving ‘90s Groovy Chick
By Tomi Otekunrin
12 July 4th Beauty Sales To Jump On ASAP
By Jordan Murray
The Secret To Victoria Beckham’s Posh Hair
By Orla Pentelow
The $6 Drugstore Beauty Product Taraji P. Henson Uses Every Single Day
By Danielle Sinay
Get Even More From Bustle — Sign Up For The Newsletter