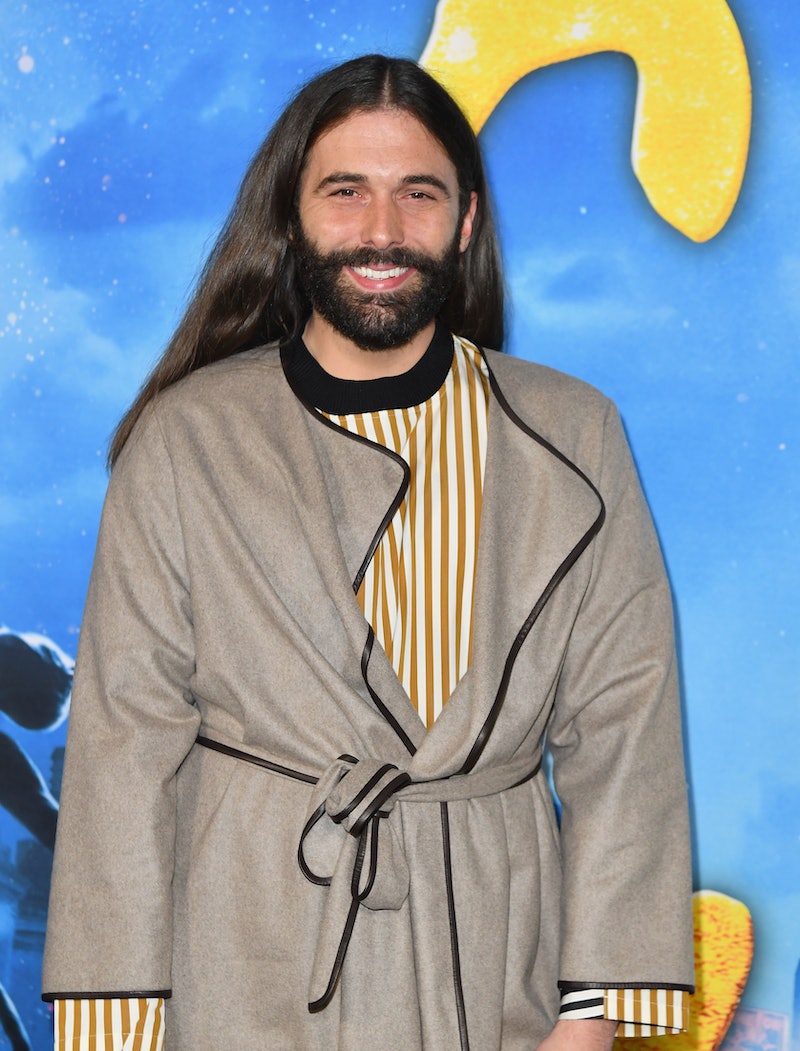 With "non-essential businesses," such as salons and spas, closed in many states to slow the spread of coronavirus, some have considered taking matters into their own hands. If you're one of those people, here's Queer Eye star Jonathan Van Ness' best quarantine haircut tip: put down the scissors. Appearing remotely on the Tuesday, March 31 at-home edition of NBC's The Tonight Show Starring Jimmy Fallon, the grooming guru addressed anyone thinking of cutting their own hair at home: "just don't do it." As he elaborated to Fallon:

"You know, the average human head grows between a quarter of an inch and a half an inch of hair a month. So, worst-case scenario, this is going to give you like — what — two inches, three inches of hair. It's like, try a new look. Maybe you need a shag; maybe you need a new little bit of length. Yeah, like, save your haircuts. Because what you don't want to do is mess up your hair so bad that you're still growing that thing out after the quarantine."

One person who didn't follow his advice was Pakistani activist and Nobel Prize laureate Malala Yousafzai. "Jonathan Van Ness: "Don't try new lewks during quarantine." Me: Cuts my own fringe," she captioned a March 28 Instagram post, tagging the Netflix star and asking how she did. Van Ness' verdict: "You slayed it honey," he wrote in the comments section.

Meanwhile, Pink also cut her own hair recently. "I don’t know how much you guys have been drinking in this whole quarantine thing, but I've decided to make it a sport," she joked in a March 24 Instagram video, revealing her partially shaved head. "When I drink, I get really, really brilliant ideas. And last night, I got an idea: 'I can cut hair. I can totally cut hair, why have I been paying people all this time?'"

Van Ness — who identifies as nonbinary and prefers he/him pronouns — also took the opportunity to discuss his new children's picture book, Peanut Goes for the Gold, with Fallon. The story centers on Peanut, a gender nonbinary guinea pig that decides to be a rhythmic gymnast. The hair care expert, who also released his memoir Over the Top: A Raw Journey to Self-Love in 2019, explained to the late-night host that, growing up, he loved classic children's books, but might have benefited more from one like his.

"I think I would have been very comforted as a child to have known that there was, like, a fierce, non-binary guinea pig who was going to seize a medal at the junior national championships—or at least would have the opportunity to go to the junior national gymnastics championships," he said. "So, I knew that I needed to, like, create that space, very much like what Peanut did."

Whether he's discussing gender identity or hair, JVN certainly brings his own brand of positivity wrapped in comedy to all he does.

More like this
Here’s Everything Coming To & Leaving Netflix In October
By Jake Viswanath
Netflix's 'Bling Empire' Season 3 Trailer Includes A 'Selling Sunset' Cameo
By Kadin Burnett and Sam Ramsden
What’s New On Netflix: Ana De Armas’ 'Blonde' & A Nick Kroll Special
By Arya Roshanian
What Is 'Pretty Wild' Star Tess Taylor Up To Now?
By Morgan Leigh Davies
Get Even More From Bustle — Sign Up For The Newsletter