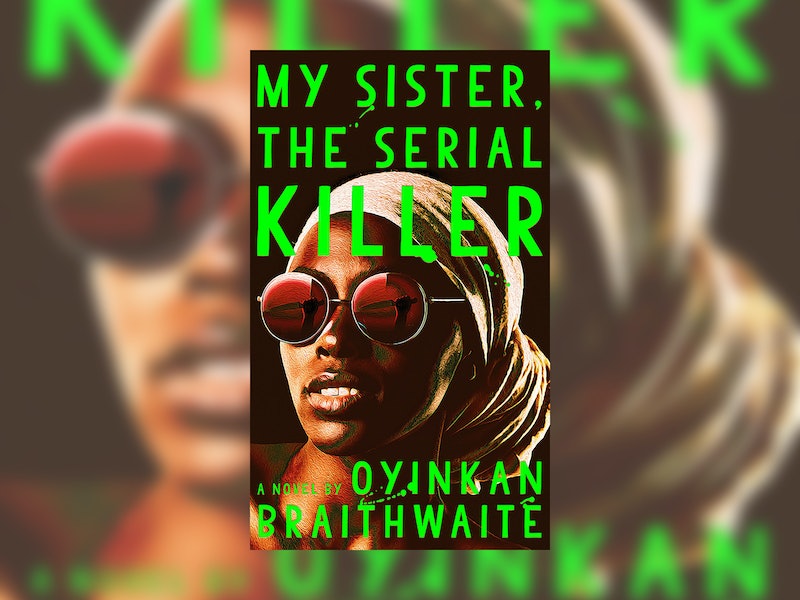 According to science, pop culture, and popular opinion, birth order can have a big effect on your psyche and the kind of person you grow up to be. Apparently, older siblings are typically more responsible, independent, and caregiving, and youngest siblings are usually the complete opposite. Known for their attention-seeking and risk-taking behaviors, the baby in the family tends to be a troublemaker, one capable of getting away with murder — or so the saying goes. But in Nigerian novelist Oyinkan Braithwaite's deadly debut, the saying proves itself true. A sly and sinister novel about secrets, sisterhood, and sibling rivalry, My Sister, the Serial Killer asks the question, how far would you be willing to go to protect your family? How far should you go?

The basic premise of Braithwaite's novel is in its title: My Sister, the Serial Killer is about a Nigerian woman whose younger sister has developed the nasty habit of murdering her boyfriends. Whenever she claims another life, she calls on her older sister to come clean up her mess — literally and figuratively.

"Ayoola summons me with these words — Korede, I killed him." At the start of the novel, Ayoola has claimed her third life, and for the third time, Korede, the book's narrator, comes to her aid. By now, Korede knows how to clean up a murder scene (it's a five-step process), what chemicals mask the smell of blood (when in doubt, use bleach), and where to dump a dead body in Lagos (over the bridge and into the water). What she doesn't know is whether or not her sister has killed in self-defense as she claims, or if there is something more sinister happening behind Ayoola's picture-perfect eyes.

'My Sister, The Serial Killer' by Oyinkan Braithwaite
Amazon

"Femi makes three, you know. Three, and they label you a serial killer," Korede tells Muhtar, a coma patient at the hospital where she is a nurse. Her only confidant and the closest thing she has to a friend, Muhtar acts as a kind of confession booth for Korede, who tells him everything about Ayoola and their crimes. He is also the only one whom she tells about her feelings for Tade Otumu, the handsome doctor she's been pining over since the day they met.

But Tade does not feel the same way for her as she does for him, because, as Korde notes, "It is as though love is only for the beautiful." Tade does, however, fall for the more gorgeous Ayoola the moment he lays on her, like most men in the sisters' lives tend to do. "After all, Ayoola is short — her only flaw, if you consider that to be a flaw — whereas I am almost six feet tall," Korede explains. "Ayoola's skin is a color that sits comfortably between cream and caramel and I am the color of a Brazil nut, before it is peeled; she is made wholly of curves and I am composed of only hard edges."

As if being jealous of her sister isn't enough, now Korede has to worry about whether or not Tade will become Ayoola's next victim. Worse still, she has to decide who she wants to protect: her baby sister, or the man she loves.

A tense and precise thriller that turns the typical serial killer story on its head, My Sister, the Serial Killer is bloody fun. With each short, unflinching chapter, Braithwaite ratchets up the tension and pulls readers further and further into Korde and Ayoola's darkly comic world. But what could be considered an otherwise sensational story about murderous maidens is rooted in a relatable narrative about sisterhood and the unbreakable, often suffocating bonds of family.

Beneath the surface of the major conflict of My Sister, the Serial Killer — Femi's murder and the subsequent investigation into it — is a much more interesting problem: Whether or not Ayoola's murders were a reaction to men hurting her, or a product of something else entirely. This is the question Korede (and readers) are desperate to find an answer to, but the more that is revealed about the sisters’ shared past, the murkier their present becomes.

Take, for example, the weapon Ayoola uses to kill each of her boyfriends: their father’s knife. “The knife was for her protection. You never knew with men, they wanted what they wanted when they wanted it,” Korede reasons at the beginning of the novel. Later though, she wonders if the knife itself has somehow cursed Ayoola with a violent streak: "Who is to say that an object does not come with its own agenda? Or that the collective agenda of its previous owners does not direct it still?"

The knife is just one small symbol of the family’s legacy of abuse and violence, specifically their father’s, that has been passed down through the generations. Both girls were raised in an unhappy patriarchal home ruled by a philandering, abusive father and an unstable, unhappy mother. As the book progresses, Korede peels back the layers of their past to reveal how fear, cruelty, and violence has shaped her and Ayoola's lives in different ways.

Like the knife Ayoola uses against her boyfriends, My Sister, the Serial Killer may be small, but it cuts deep. It's a sharp and witty thriller, one that offers a brief but intense look at the complicated nature of sisterhood and its perpetual swing between unquestionable loyalty and sheer resentment.