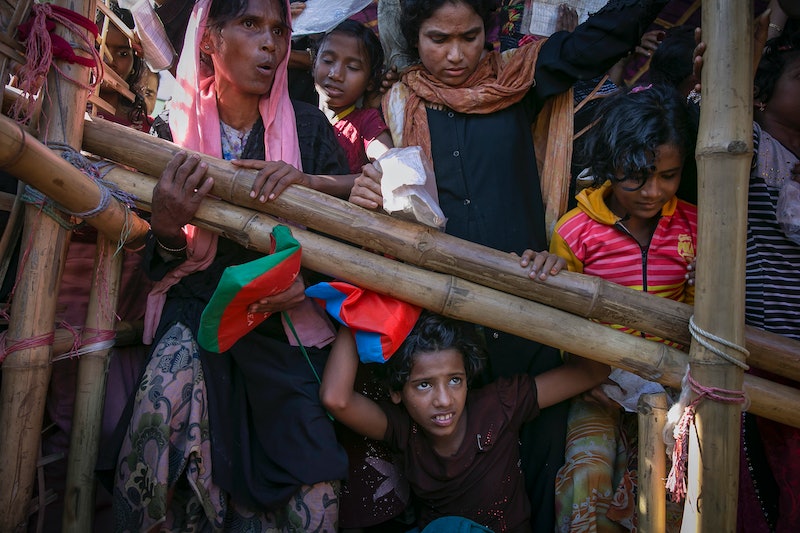 The term "fake news" is a nearly constant fixture in the American lexicon these days. Once a term employed to describe misinformation circulating on the internet, it's morphed into a catch-all phrase favored by the president to describe any news that he finds unsavory. Now, Myanmar officials are calling reports on the Rohingya "fake news" to dismiss stories about one of the darkest ethnic cleansings in recent history.

The Rohingya, a Muslim minority that have lived in Myanmar's Rakhine state for years, have long been persecuted as illegal aliens in the Buddhist-majority country. They have largely been denied citizenship by Myanmar, and most are considered stateless today. Following a series of clashes along the Myanmar-Bangladesh border last year, Myanmar military and police initiated a violent crackdown on the Rohingya people.

During their brutal campaign, law enforcement burned down villages, raping and killing the people living in them. Reports claim that more than 620,000 Rohingya have fled to neighboring Bangladesh since last August, in fear of the military crackdown.

Zeid Ra'ad Al Hussein, the U.N. High Commissioner for Human Rights, has called Myanmar's campaign against the Rohingya people "a textbook example of ethnic cleansing"; Secretary of State Rex Tillerson has met with Myanmar leaders to discuss the crisis.

Many leaders in Myanmar, though, refuse to acknowledge the genocide. In a story published Sunday by The New York Times, state security officer U Kyaw San Hla is quoted dismissing the ethnic cleansing as "fake news," insisting, "There is no such thing as Rohingya." Sulome Anderson, a American journalist based in both Beirut and New York, expressed concern on Twitter about the fact that Trump's favorite catchphrase is now being used to justify violent actions by a brutal regime.

Simon Adams, the executive director of the Global Center for the Responsibility to Protect, said that the state official's use of "fake news" to deny the existence of the Rohingya was "an example of how Washington's poisonous political discourse can be weaponised," while Camilla Schick, a New York Times video journalist, noted that the phrase was now being used as a tool to excuse genocide.

This is not the first time that Myanmar officials have dismissed reports of the Rohingya genocide as "fake news" — back in September, Myanmar State Counselor Aung San Suu Kyi used the same phrase when responding to reports of ethnic cleansing. The country's civilian leader won a landslide election in 2015 after defying military rule under house arrest for 15 years; she is also a recipient of the Nobel Peace Prize.

In an interview with NPR following reports about Aung San Suu Kyi's dismissal of the ethnic genocide in September, former U.S. ambassador to Myanmar Derek Mitchell recognized the need to change the tone of the conversation while defending the leader, who he said has little oversight over the military's actions in regard to the Rohingya:

She doesn't control the military, so she's in a really, really difficult spot that I think we need to understand even as we criticize.

Like Aung San Suu Kyi, the Myanmar state media feeds into the narrative that the Rohingya genocide is overblown. In a September report from Reuters, Myanmar bureau chief Antoni Slodkowski said there was "huge suspicion and basically disbelief" toward stories about the Rohingya fleeing Rakhine state for Bangladesh. Reuters noted that most Myanmar citizens see the Rohingya as "illegal intruders" into the country, and that state media features little reporting about the refugee crisis.

While Secretary of State Tillerson has labeled the genocide in Myanmar as "ethnic cleansing," the United States has so far been hesitant to take bold actions against the country. As Foreign Policy reported in November, the State Department has declined to take stronger international action against Myanmar's government, settling for targeted sanctions against certain officials who have played a role in the genocide, rather than broader sanctions.

As Myanmar officials' use of "fake news" indicates, though, distrust of the media in the United States may have affected international dialogue surrounding the crisis in ways that the State Department cannot control.