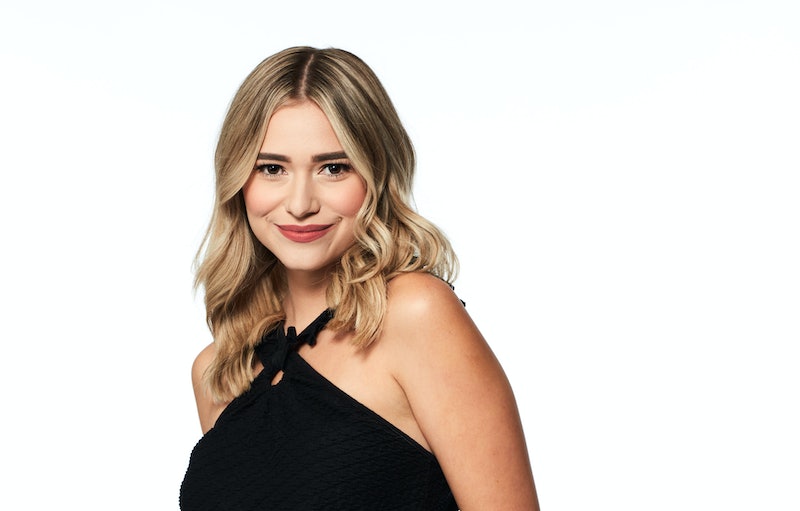 Fasten your seatbelts, because it's finally time for Peter Weber's season of The Bachelor. The airline pilot's quest for love kicks off Monday, Jan. 6 with a three-hour special on ABC. One of the 30 women vying for his heart this year on The Bachelor is Mykenna Dorn, who is a 22-year-old fashion blogger from Langley, British Columbia.

Her ABC bio explains that Mykenna has been in one serious relationship, but she broke things off when her boyfriend became too controlling. "She's looking for someone who will surprise her with romantic adventures, but will also be ok with it when she wants to go out drinking and dancing with her friends," the bio reads. It seems like Mykenna loves having a good time, so maybe she and Peter will prove to be compatible after all.

But while she may be a fashion blogger (complete with a highly curated Instagram, obviously), Mykenna's bio assures audiences that "she's way more than a pretty girl in a photo." For one thing, she'd love to start a charity one day. Here's what else audiences can glean about this Canadian Bachelor contestant before the Season 24 premiere (hint: there's a lot of wine, dancing, and wine-dancing involved).

"Dance allows me to express myself in a way words can't," Mykenna wrote in an Instagram from Aug. 7, 2019. "It truly is one of the greatest arts and I'm so thankful for it." That said, there's no info on her LinkedIn about whether she studied dance in school or if it's simply a hobby of hers. Which leads us to the next point...

This isn't her first time doing this, either. Or second. Or third. Or fourth. Or — OK, you get the idea. In fact, it seems like Mykenna just loves doing weird dancing — with or without wine. Too bad Tyler C. isn't the Bachelor, because he loves to bust a move.

In fact, she's created her own hashtag for the activity: #winewithmykenna.

She Loves Flying the Friendly Skies

Mykenna is quite the jet-setter and has visited countries like Italy, the Netherlands, France, Denmark, Sweden, the Czech Republic, Greece, and of course the U.S. Seems like having a pilot boyfriend could come in handy.

Mykenna Wants Her Parents to Approve of Any Boyfriend

Mykenna's bio says that she's close with her parents and loves going to car shows with her dad (although that may not actually be true, because her Instagram bio says, "Apparently I like to go to car shows.") Whatever the case, the ABC mini profile continues, saying that the Bachelor contestant is "here to find love and isn't going to settle for anyone who won't impress her family. Above all else, Mykenna loves her family."

In fact, her bio goes on to say that she's "constantly inspired by her grandparent's love, which makes sense, as they were together for 61 years and her grandpa proposed to her grandma on their first date." Seems like she has pretty high standards.

But then again, who isn't? Mykenna also likes Dan + Shay, Dua Lipa, and Carly Rae Jepsen — anything you can dance to, really.

Mykenna's ABC bio shares that the long-running medical soap is her favorite show, and in a season promo, she says she's seen each episode seven times. This isn't even the first time Mykenna dressed like Meredith Grey for Halloween. Let's hope Peter likes Grey's Anatomy, too!

But then again, who wouldn't if it was their livelihood?

Over at Betches, Chris Burns posited that Mykenna may not be on the show for the right reasons. The writer references her blog, mykennajean.com, which has since been taken down. However, in her article "10 Facts About Me" from Oct. 2018, she apparently said, "I WILL BE ON THE BACHELOR SOON, MARK MY WORDS." In another, Mykenna mentioned auditioning for the show. That said, does anyone really go on The Bachelor for the right reasons?

She Wears Her Emotions on Her Sleeve

In Chris Harrison's commentary of Mykenna, he teases that she receives the last rose of the night, and you can see the pain on the Bachelor contestant's face. In her Instagram story, Mykenna says, "ya... this should be interesting to watch."

"Bachelor nation watch and enjoy — trust me," Harrison continued. "This is good."

Now, all there is to do is place your seat back in its upright and locked position and get ready for take-off.