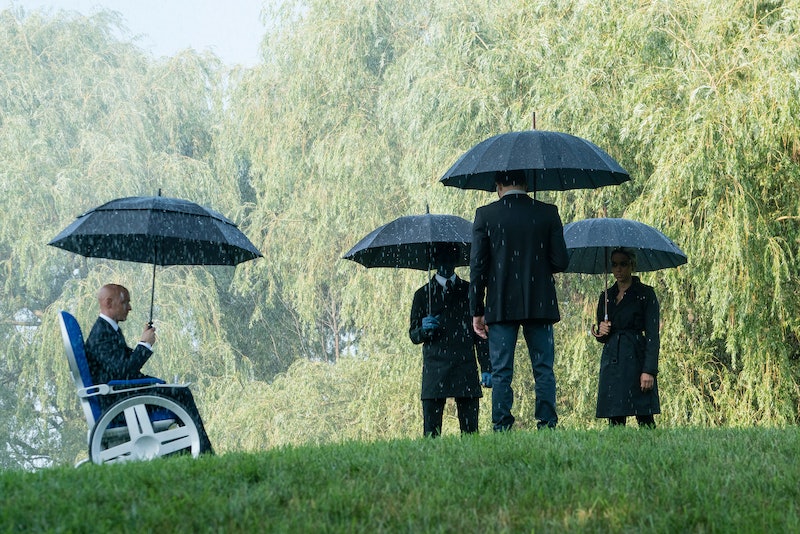 Major Dark Phoenix spoilers ahead. In the events of X-Men: The Last Stand, many of our favorite mutants perished at the hands of Famke Janssen's Jean Grey a.k.a. Phoenix — including Jean's main love interest Scott Summers a.k.a. Cyclops (James Marsden) — only to be brought back to life thanks to X-Men: Days of Future Past. In take two of the onscreen Phoenix narrative, there are significantly less casualties, but a fan favorite does die, and early on. As foreshadowed in the official trailer, Mystique/Raven (Jennifer Lawrence) dies in Dark Phoenix.

In the film, the franchise's new Jean Grey (Sophie Turner) and the rest of the X-Men are sent out on a mission to outer space, but in the process of rescuing a crew of astronauts, a mysterious entity enters Jean. This event amplifies her powers to unimaginable levels, and leads her to lose control. This, of course, spells trouble for the X-Men, other mutants, and the rest of the world.

The Dark Phoenix official trailer clearly shows Raven getting caught in Jean's line of fire. The blue-skinned, red-haired shapeshifter slowly approaches Jean, talking to her to try and calm her down, and bring her back home to the Xavier mansion. But upon her touch, Jean reacts violently, and a strong blow pushes Raven across the cul-de-sac.

Upon watching the film, you'll find out that that strong blow accidentally puts an end to Mystique. It sends her flying through metal blades on the back of a truck. This then explains the trailer's opening scene with Jean sobbing, saying, "Why did you make me do that?" And, yes, that funeral in the trailer is for the classic X-Men character. And this time around, there's no time-altering force to undo her death.

Raven's death is actually a major plot point in Dark Phoenix. It turns Hank McCoy a.k.a. Beast (Nicholas Hoult) against Charles Xavier (James McAvoy), as he blames Charles for messing with Jean's memory and lying to her, causing her anger and loss of control. It also leads to the children of the academy, as well as the other X-Men, questioning whether Jean is good or evil — especially since Raven was like a mother figure to all of them. The death of the shapeshifting mutant also sends Erik Lehnsherr a.k.a. Magneto (Michael Fassbender) on a mission to kill Jean. She had romantic relationships with both Hank and Erik at different points in her life. As it's her death that spurs both of them to action, it could be be considered a case of fridging.

Her death, however, really isn't that major of a spoiler. Not only does the trailer give it away, but director Simon Kinberg also gave an interview four months ahead of the premiere explaining Lawrence's character's fate. He told Entertainment Weekly, "I was obviously sad about it, as Jen’s friend, and also as a fan of Jen as an actress. But I felt it was the strongest, most dramatic thing for the movie, and sometimes you have to make those kinds of hard decisions to service the larger story. And the larger story really is Jean cracking up, losing control because she’s more powerful than anyone else in the world."

"To dramatize that properly, you have to show real loss, you have to show real pain and show real threat and menace. I didn’t want to do that by her blowing up a building with anonymous people in it," he continued. "It had to feel really personal for the X-Men, and I wanted it to be something that would fracture the X-Men as well. Mystique is someone who in our universe has been part of the X-Men and has been part of Magneto’s world. Her death impacts literally everybody."

In a recent interview with Jimmy Kimmel, Lawrence revealed that she cried over her death scene, but not for the reason you'd think. "I teared up a little bit watching Sophie in that scene," the actor said. "Her reaction to the death was so emotional."

Of course, there's no telling what happens now with the X-Men, especially since the Disney now owns them. Who knows? Maybe the Marvel Cinematic Universe will bring about Raven's resurrection.