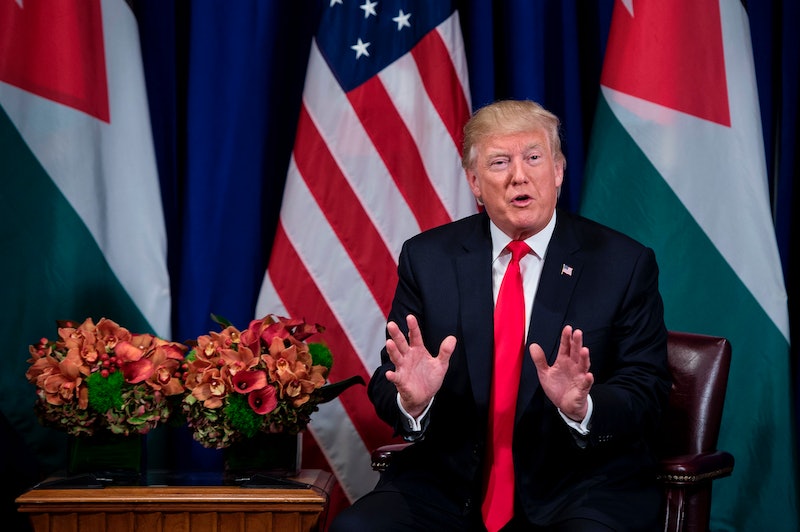 After calling Africa a continent of "tremendous, tremendous potential" at the United Nations in New York City on Wednesday, Donald Trump referred to a non-existent country called "Nambia" in front of his international audience. The imaginary country uttered by Trump may have surprised the African leaders present at the United Nations luncheon which included figures from Ghana, Guinea, Namibia, Ethiopia, South Africa, Uganda, and Senegal. But no one from "Nambia." Naturally, as soon as the news arrived, "Nambia" memes and jokes making fun of Trump's gaffe took over the internet as people tried to make sense of it.

While the internet attempted to piece the rhetorical misstep together, Trump's African audience seemed to be unimpressed with the American president's speech as photos of the unfazed Zimbabwean delegation went viral online as well as a photo of Zimbabwean president Robert Mugabe appearing asleep with his hand nestling his cheek. And you guessed it. There were memes for that, too.

To be fair, Trump may not have been conjuring up imaginary African countries in his head when he said "Nambia." According to a White House transcript of today's speech, Trump was originally supposed to say Namibia. It's an actual country with actual people. But during the luncheon, Trump said that the health care system of non-existent "Nambia" was "self-sufficient" and the rest is, obviously, history.

Here are some Nambia jokes we all can enjoy.

It dawned on them.

Or rather, where on earth. Sorry.

"Hold my Nambia" could work.

It just gets more and more ridiculous.

7. An Investment Opportunity In Nambia

8. Please Get It Right

If there's Nambia, there has to be Wakanda. Make it happen.

Perhaps more common than the jokes and memes was a running sentiment of disbelief at such a gaffe.

Gotta make sure this actually happened.

15. Nambia Is The Next Narnia

This could be a great book idea.

Some were simply embarrassed by Trump's Nambia moment.

Right in the heart of Nambia.

18. A Trump Tower In Nambia

20. Nambia In Our Textbooks

Premium internet content means two memes together at once. Bless.

People have their reasons.

Please look at this, Eddie Murphy.

I would like to talk to the person responsible for the Photoshop. Thank you.

That sums up a lot of people's feelings right now.

Normally, speeches at the United Nations tend to gain the attention of the world for their serious notes on diplomacy, bilateral agreements, international solidarity over issues, and more. But this Wednesday's speech became popular for funnier reasons. In case you are in the mood to learn more about how an African country Nambia would look like or you may personally have an idea about what The Chronicles of Nambia should entail, check out Twitter's feed for Nambia and Trump. You won't be disappointed.