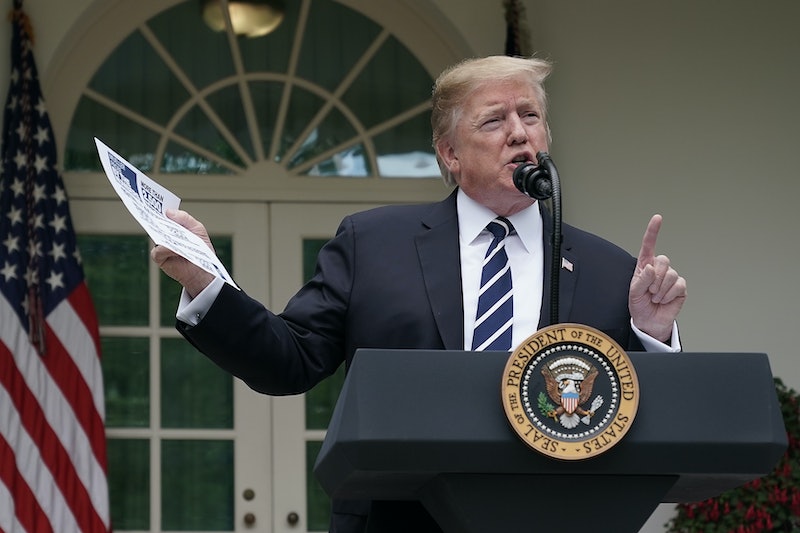 While speaking to reporters Wednesday, Speaker of the House Nancy Pelosi accused President Trump of a "cover up," prompting Trump to insist later in the day that "I don't do cover ups." In response to the kerfuffle, former Obama White House Photographer Pete Souza posted a photo on Instagram that made it clear where he stands on the whole "cover up" question.

"This is what a cover up looked like during the Obama administration," Souza wrote underneath a photo of Obama covering his head in his hands. "Hat tip: @speakerpelosi."

It's a clear jab at the Trump administration, and far from the first time Souza has used old photos from the Obama White House in an attempt to troll Trump. In fact, Souza released an entire book devoted to doing just that: In 2018, he released Shade: A Tale of Two Presidents, which contrasts tweets and headlines from Trump's presidency with photos from Souza's time in the White House. Throughout the book, Souza pairs photos from the Obama years with captions that take digs at Trump.

To take just one example: In April 2018, Trump tweeted "Mission Accomplished!" in response to the joint bombing of a Syrian airfield by American, British, and French forces. He was mocked for this, in large part because "mission accomplished" was the same phrase George W. Bush used — inaccurately, as many have noted since — in 2003 to describe the American invasion of Iraq.

In response, Souza resurfaced what's perhaps his most famous photo: the shot of Obama, Hillary Clinton, Joe Biden and several other then-officials waiting in anticipation as American troops carried out the assassination of Osama bin Laden in 2011.

"Back when a mission was actually accomplished," Souza wrote underneath the photo in the book.

The most recent "cover up" controversy, though, came as Trump and Democrats were supposed to hold a meeting about a possible bipartisan infrastructure deal.

“We do believe that it’s important to follow the facts,” Pelosi told reporters after holding a closed-door meeting with House Democrats, which took place before the planned meeting with Trump. “We believe that no one is above the law, including the president of the United States. And we believe the president of the United States is engaged in a cover-up.” CNN reports that, at the meeting with Democrats, several House Democrats pushed Pelosi to introduce articles of impeachment against Trump, a request Pelosi has so far refused.

A source told HuffPost that when it came time for Trump to meet with Congressional Democrats about infrastructure, the president walked into the room without sitting down or acknowledging any of the Democrats present. He told them that an infrastructure deal wouldn't be happening as long as Congress is still investigating him, and left without greeting anybody.

“He just took a pass,” Pelosi told reporters after the fact, adding that it was "a lack of confidence on his part" that led Trump to walk out of the meeting.

Speaking in the Rose Garden later in the day, Trump said, "I don't do cover-ups," and claimed that he is "the most transparent president probably in the history of this country." In a subsequent letter to colleagues, Pelosi referred to the president's Rose Garden address as a "temper tantrum."