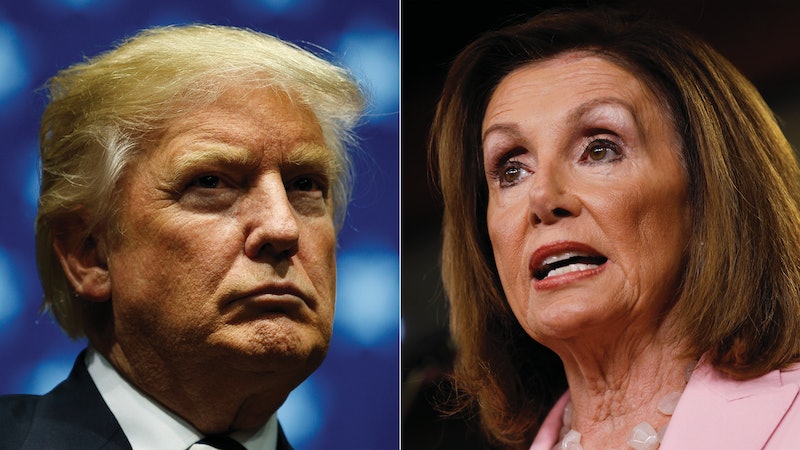 Murmurs about impeaching the president have turned into a collective roar. After resisting calls to begin the process for months, on Tuesday, Speaker Nancy Pelosi announced an impeachment inquiry into President Donald Trump. This dramatic shift comes after a whistleblower submitted a complaint regarding a phone call between Trump and the Ukrainian president that the administration so far has resisted turning over to Congress.

"This is a breach of his constitutional responsibilities," Pelosi said in a televised announcement, saying that Trump admitted to asking the Ukrainian president "to take actions that would benefit him politically."

The whistleblower complaint reportedly surrounded a July phone call with Volodymyr Zelensky in which Trump allegedly pressured the Ukrainian president to investigate Hunter Biden, the son of former Vice President Joe Biden, and his business dealings. Trump confirmed he discussed Biden on the call, but denied doing anything wrong, tweeting that it was a "very friendly and totally appropriate call." He said he has approved the release of the unredacted call transcript.

However, it's important to note that the transcript would not give the full picture of the whistleblower's complaint, which hasn't been turned over to Congress yet. The Wall Street Journal reported that the complaint alleged Trump is trying to pressure a foreign country to influence the 2020 presidential election, and that Rudy Giuliani, Trump's personal attorney, is allegedly involved outside of the call as well. The whistleblower has expressed interest in speaking to the House Intelligence Committee, according to the chairman, Rep. Adam Schiff (D-Calif.).

Because the House has "oversight and investigatory responsibilities," according to the House of Representatives' Office of the Historian, it initiates the impeachment process by authorizing an inquiry, which is led by the judiciary committee. The committee decides whether or not to bring articles of impeachment to the rest of the House, who decides whether or not to adopt the articles. Impeachment proceedings then move to the Senate.

More than 150 House Democrats currently support an impeachment inquiry, according to CNN. Like Pelosi, several other prominent Democrats were previously hesitant to call for it, including Rep. John Lewis (D-Ga.), a well-respected and longtime representative who came out in favor of impeachment Tuesday morning.

"We cannot delay," Lewis said on the House floor. "We must not wait. Now is the time to act. I have been patient while we tried every other path and used every other tool. We will never find the truth unless we use the power given to the House of Representatives and the House alone to begin an official investigation as dictated by the Constitution. The future of our democracy is at stake."

Pelosi pointed out that it was Constitution Day when the inspector general formally notified Congress that the administration was forbidding him from turning over the whistleblower campaign. "No one is above the law," Pelosi said, adding that Trump must be held accountable.

"The actions taken to date by the president have seriously violated the constitution," Pelosi said, "especially when the president says, 'Article II says I can do whatever I want.'"