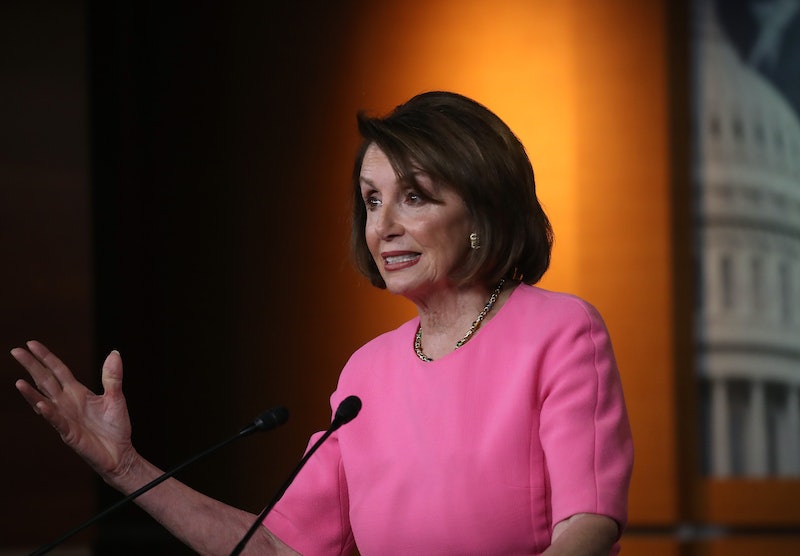 President Trump has recently been calling for America to shift towards a "merit-based" immigration system, in which highly skilled and educated immigrants seeking citizenship would be given priority over immigrants with families in the country. On Thursday, Speaker of the House Nancy Pelosi criticized Trump's new immigration plan by pointing out that, if it were enacted, the first lady's family might have never become U.S. citizens.

“I don’t know if merit counted for when his wife’s family came into the country,” Pelosi said at an event at the Commonwealth Club Thursday, per HuffPost. “I don’t know. Maybe it did. God bless them if it did. But he calls that ‘chain migration,’ which he wants to get rid of.”

Melania Trump's Slovenian-born parents, Amalia and Viktor Knavs, became U.S. citizens in 2018, the New York Times reported. They obtained their citizenship through a sponsorship from Melania, according to CNN. When asked by the Times if this was the case, the couple's immigration attorney replied, "I suppose."

Despite this, Donald Trump regularly bashes family-based immigration, which he derisively calls "chain migration." In a mid-May speech, he proposed reforming America's immigration system such that highly-skilled immigrants with college degrees and proficiency in English would be prioritized for citizenship over immigrants applying via sponsorship from a family member.

On May 16, Trump gave a speech at the White House in which he outlined the broad framework of immigration legislation that he'd like Congress to pass. Although the White House has not released an actual bill, the Times reports that Trump's plan would require that 60% of visas issued every year are given to immigrants with high levels of education or, alternatively, skills that the White House deems valuable. Currently, around 65% of visas are awarded through family sponsorship, according to the National Immigration Forum.

Although details of Trump's plan haven't been released — and indeed, it's unclear whether or not a piece of legislation has yet been written — White House Press Secretary Sarah Huckabee Sanders confirmed Thursday that it will not include protections for DREAMers or DACA recipients, as such provisions would be "divisive."

It's unclear if or when the White House will unveil the specifics of Trump's proposal. Republican Sen. Lindsey Graham, a close ally of the president, acknowledged on Wednesday that "the White House's plan is not designed to become law," according to CNN, and said it was intended more "to unite the Republican Party around border security and merit-based immigration." As HuffPost notes, any Trump-endorsed immigration plan would have stiff odds of passing the Democratic-controlled House of Representatives or the Senate, where Democrats have enough votes to filibuster legislation.

In addition to her comments at the Commonwealth Club, Pelosi also criticized Trump's proposal in a separate press conference Thursday morning.