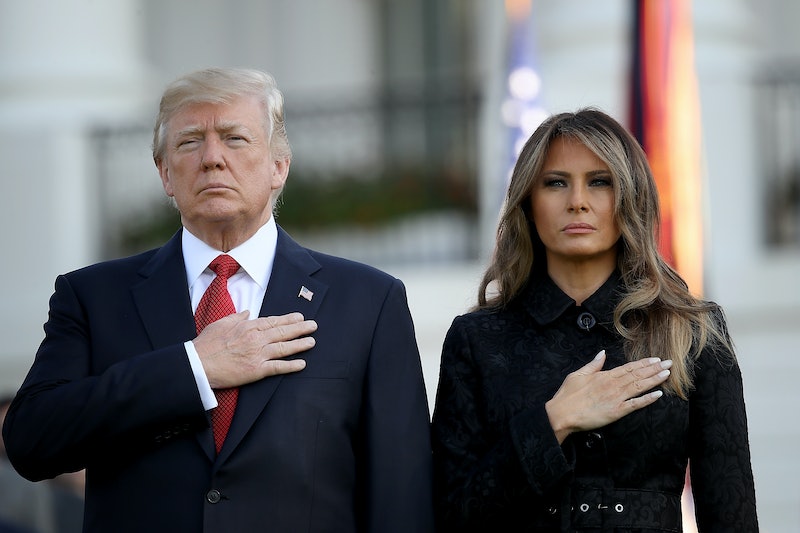 On Thursday, First Lady Melania Trump's parents became United States citizens. Originally from Slovenia, Viktor and Amalija Knavs became citizens through a process that their son-in-law, Donald Trump, vehemently opposes. What is this so-called "chain migration" program, and why does the president hate it so much?

"CHAIN MIGRATION must end now!" the president bellowed on Twitter in November. "Some people come in, and they bring their whole family with them, who can be truly evil. NOT ACCEPTABLE!"

To start with, the term "chain migration" is itself controversial, regardless of its policy merits. Broadly speaking, many proponents of more lenient immigration policies believe that it's a pejorative intended to demean immigrants who receive citizenship through family members, and have proposed the term "family-based immigration" as an alternative. Conservatives and Republicans, on the other hand, generally take no issue with it. That said, some pro-immigration activists have argued that progressives should reclaim the term as their own.

Linguistic debates aside, the meaning of the term is relatively straightforward: "Chain migration" — which is referred to as "family reunification" — is the process by which U.S. citizens and green card holders can sponsor a family member who wishes to emigrate to the United States. When successful, this process results in that family being given a green card — and as a result, permanent, legal status in the United States.

It's worth stressing that sponsoring a family member does not, by any means, guarantee that they will receive a green card. It simply gives them a place in line. Once it's their "turn," they can then apply for a green card. That line can be very, very, very long: Immigrants who were sponsored by their families in June 2004, for instance, were only given the chance to apply for green cards in January 2018, according to the New York Times.

According to their lawyer, Melania Trump's parents became citizens of the United States through "chain migration."

“They had gotten sponsored by their daughter and then once they had the green card, they then applied for citizenship when they were eligible,” attorney Michael Wildes told the Times. Trump herself became a U.S. citizen in 2006.

The president, however, is a staunch opponent of the process that his parents-in-law used to obtain citizenship.

"You have chain migration," Donald Trump said at a rally in Pennsylvania on Tuesday. "You know what that is? A guy comes in — stone-cold killer in many cases. A guy comes in, and then you have to bring his aunt, his uncle, his father, his grandfather, his grandparents, his third niece by a different marriage." This is a factually inaccurate, as "chain migration" doesn't require the government to grant residency to anybody.

In addition to tweeting against it and denouncing it at rallies, the president has proposed strict new limits on which family members qualify for family-based immigration.

Under legislation proposed by the Trump administration in January, green card holders and U.S. citizens would only be allowed to sponsor their spouses or their minor children for green cards; under current law, extended family members such as nieces and grandparents are also eligible for family sponsorship. This is just one way in which Donald Trump wants to restrict legal immigration as well as illegal immigration — and if Congress were to pass it, Melania Trump's parents would not have been eligible for their green cards, let alone U.S. citizenship.

The first lady's position on family-based immigration is unclear. Bustle has reached out to her office for clarification on this, but hasn't yet received a response.