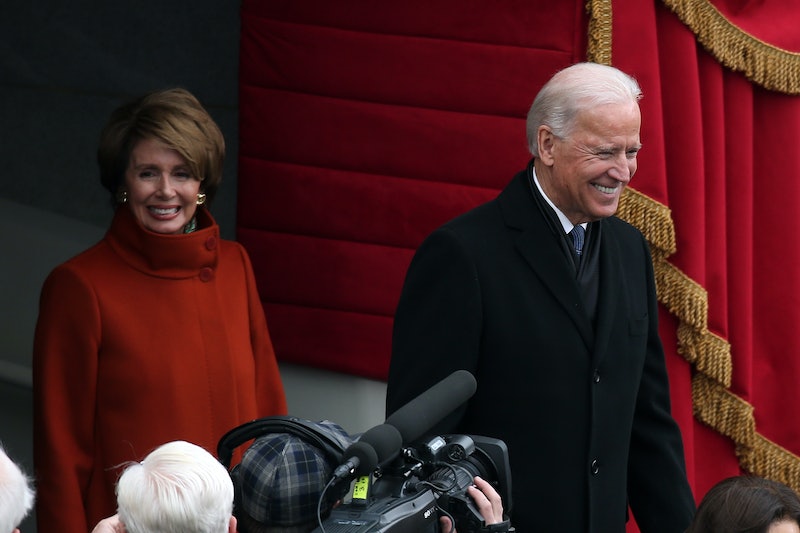 Days after two women said former Vice President Joe Biden touched them inappropriately during his time in the White House, Speaker of the House Nancy Pelosi said that Biden's behavior isn't "disqualifying" if he runs for president again, Politico reports. However, Pelosi also said that Biden needs to be more aware of other peoples' personal space, according to Politico, and recognize how his physical behavior can affect people in ways he's unaware of.

“He has to understand, in the world that we're in now, that people's space is important to them, and what's important is how they receive it and not necessarily how you intended it," Pelosi says in video from the Politico-sponsored event Tuesday. "I don't think it's disqualifying."

In an article published Friday in The Cut, Nevada politician Lucy Flores said that, while the two were backstage at a campaign rally in 2014, Biden placed his hands on her shoulders, smelled her hair and gave her a kiss on the back of her head without her permission. Days later, former congressional aide Amy Lappos wrote on Facebook that in 2009, Biden "put his hand around my neck and pulled me in to rub noses with me" while the two ran into each other at a fundraiser, making her feel "incredibly uncomfortable," according to the Hartford Courant.

Biden, who's widely believed to be gearing up for a presidential run in 2020, said in a statement Sunday that it wasn't his intention to act "inappropriately," but that he'll "listen respectfully" to any women who feel that he did.

"In my many years on the campaign trail and in public life, I have offered countless handshakes, hugs, expressions of affection, support and comfort," Biden said in his statement. "And not once — never — did I believe I acted inappropriately. If it is suggested I did so, I will listen respectfully. But it was never my intention. I may not recall these moments the same way, and I may be surprised at what I hear. But we have arrived at an important time when women feel they can and should relate their experiences, and men should pay attention. And I will."

But in her remarks Tuesday, Pelosi suggested that Biden's apology fell short, noting that impact matters more than intent.

"It isn't what you intended; it's how it was received," Pelosi said, according to Politico. "So to say, 'I'm sorry that you were offended' is not an apology. 'I'm sorry I invaded your space,' but not, 'I'm sorry you were offended.' Because that's — what is that? That's not accepting the fact that people think differently about communication."

For years, some have drawn attention to Biden's body language toward women and girls at public events when he was vice president, arguing that he sometimes appears to violate women's and girls' personal space and is overly-affectionate. Biden's communications director Bill Russo pushed back against these interpretations, calling them "smears and forgeries" perpetrated by "right-wing trolls."

In her comments Tuesday, Pelosi said that Biden should "join the straight-arm club" in order to avoid violating anybody's sense of personal space in the future.

"I'm a member of the 'straight-arm club.' I'm a straight-armer," Pelosi said, extending her arm out for a mock handshake. "Just pretend you have a cold, and I have a cold."