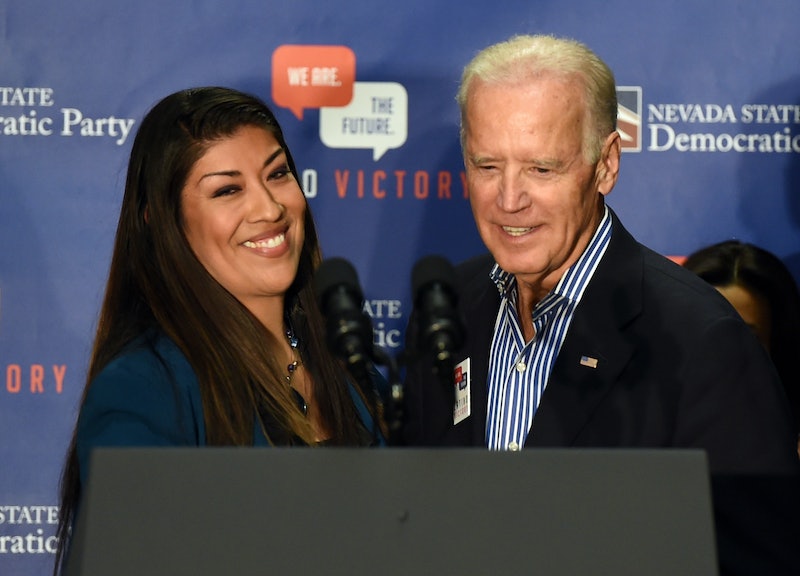 As former Vice President Joe Biden continues to contemplate a presidential run, his background is coming under increased scrutiny from all sides. On Friday, The Cut published an essay by Nevada politician Lucy Flores, who said Biden gave her an unwanted kiss while smelling her hair when the two were backstage at a campaign event in 2014.

Flores said the incident took place days before the 2014 midterm elections, in which she was running for lieutenant governor of Nevada. Biden had endorsed her bid, and the two were campaigning at a rally in Las Vegas. While backstage at the event, Flores said she felt "two hands on my shoulders," prompting her to wonder, "Why is the vice-president of the United States touching me?"

Flores wrote that Biden "proceeded to plant a big slow kiss on the back of my head," at which point her "brain couldn’t process what was happening." She said that she "wanted nothing more than to get Biden away from me," and was relieved when her name was called to take the stage moments later.

In response to Flores' story, Biden's communications director tells Bustle in a statement:

Vice President Biden was pleased to support Lucy Flores’s candidacy for Lieutenant Governor of Nevada in 2014 and to speak on her behalf at a well-attended public event.

Neither then, nor in the years since, did he or the staff with him at the time have an inkling that Ms. Flores had been at any time uncomfortable, nor do they recall what she describes.

But Vice President Biden believes that Ms. Flores has every right to share her own recollection and reflections, and that it is a change for better in our society that she has the opportunity to do so. He respects Ms. Flores as a strong and independent voice in our politics and wishes her only the best.

This isn't the first time Biden has been accused of inappropriate behavior towards women. In 2015, Gawker published a photo compilation depicting Biden's body language toward women and girls at public events in various ways, including the gesture Flores described, and there are many compilations on YouTube depicting the same. He has been roundly denounced for this in the past.

However, Flores' story is different in that it's a first-hand account from a woman about how Biden's behavior made her feel. In the essay, Flores says she was "mortified" in the moment, and that Biden's actions left her feeling "uneasy, gross, and confused." She also discussed the confusion she felt about the prospect of reporting the incident, both because of Biden's position and the nature of the interaction itself.

"Who do you tell? What do you say?," Flores writes. "Is it enough of a transgression if a man touches and kisses you without consent, but doesn’t rise to the level of what most people consider sexual assault? I did what most women do, and moved on with my life and my work."