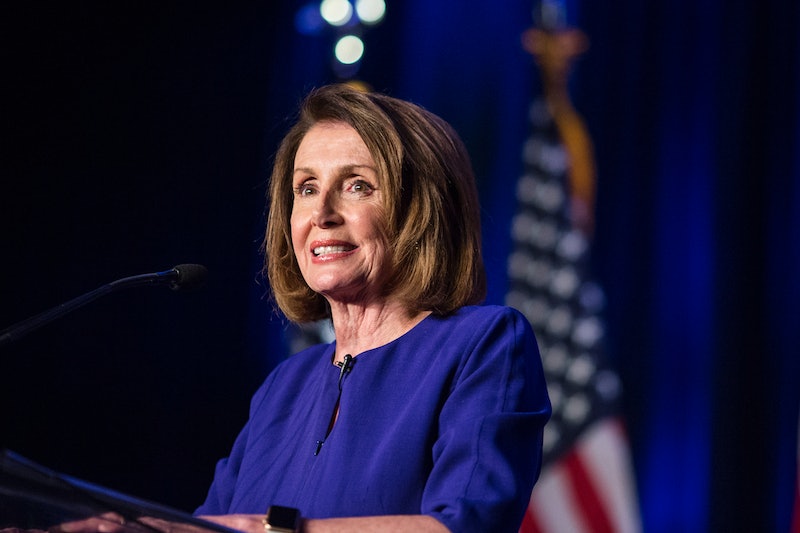 Amid cheers from the audience on Tuesday night, House Minority Leader Nancy Pelosi delivered her post-midterm election speech after the results determined that Democrats will retake the House. "My friends," Pelosi said, "tonight a historic victory is within our grasp. A victory we did not seek in the name of our party but America's hardworking families."

In congratulating her party, Pelosi gave a shout-out to the "dynamic, diverse, incredible candidates who have taken back the House for the American people." The Democratic leader encouraged her political peers to "remember this feeling, know the power to win."

Democrats' slew of wins in the House on Tuesday night was about "restoring the Constitution's checks and balances to the Trump administration," according to Pelosi. "Honoring the vision of our [founding] fathers, the sacrifice of our men and women in uniform, and the aspirations of our children," she said.

Pelosi congratulated the Democrats who ran on a variety of issues throughout the country as well as their volunteers. "The women and men who mobilized in historic numbers," Pelosi said, "who saw what this GOP Congress was doing, and refused to stand still. Every call you made, every door you knocked, every text you sent, every conversation you had, made the difference between winning and losing in this election."

According to Pelosi's deputy chief of staff, Drew Hammill, "President [Donald] Trump called Leader Pelosi at 11:45 p.m. this evening to extend his congratulations on winning a Democratic House Majority. He acknowledged the Leader's call for bipartisanship in her victory remarks."

Pelosi, who gave the Democratic victory speech at the Hyatt Regency in Washington D.C. on Tuesday night, said that Democrats would work on building bipartisan solutions for national issues. She put an emphasis on drug prices and said that proposed legislation from Democrats would seek input from Republicans.

With at least 23 seats in the House of Representatives, Democrats now have the majority in the chamber for the first time since 2010. This is a monumental achievement for the party. The Senate, however, is ruled by a Republican majority.

Even Trump was reportedly aware that there was a possibility of Democrats taking the House back. According to Time magazine, Trump said on Friday night that "it could happen" when asked about the GOP losing the lower chamber. It's especially worth noting that Democrats flipped at least 12 seats in the House. One of those victories took place in Virginia's 10th Congressional District, after Republican Barbara Comstock lost to Democrat Jennifer Wexton.

It's a victory that has pleased well-known public figures in the country, including CNN's Van Jones. "My heart has been restored," Jones said. "It's the end of one-party rule in the United States, thank God, and the beginning of a new Democratic Party. Younger, browner, cooler, more women more veterans … can win in Michigan, can win in Pennsylvania, can win in Ohio."

The win for Democrats comes after celebrities tweeted at people to "stay in line" if the waits at their polling places were long and people were voting late. It also comes after people kind of freaked out about the 2018 midterm election. It seems like all the fretting on Democrats' part paid off to an extent, at least in the House of Representatives.