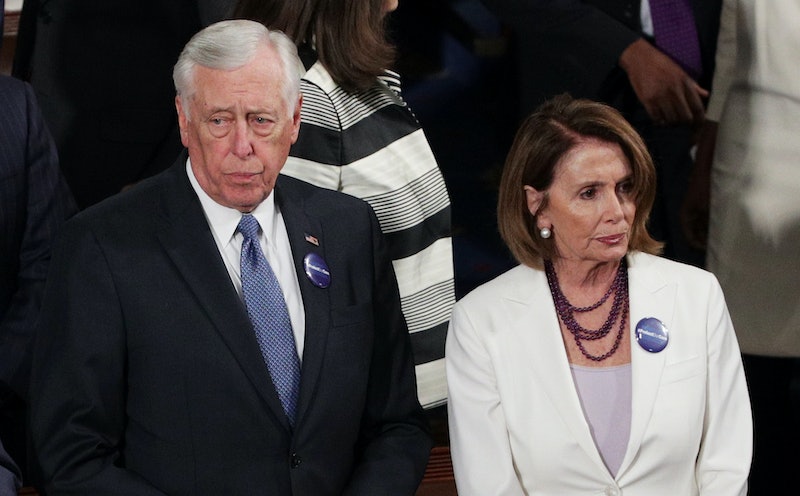 President Donald Trump's State of the Union address on Tuesday follows weeks of speculation as to whether or not it would actually take place. During the partial government shutdown, the House Speaker urged Trump to delay his speech until after the government was reopened, and he ultimately agreed. But the speaker's opposition to Trump went beyond the timing of the speech; Nancy Pelosi's outfit at the SOTU sent a clear and powerful message about showing solidarity with other women across the country.

According to The Washington Post, Trump will be surrounded by women as he delivers his speech. Pelosi will sit behind him, immigrant women will watch the speech from the balcony, and Stacey Abrams — a black woman who ran a close race for the Georgia governorship — will deliver the official Democratic rebuttal. Many of the women in attendance at the SOTU wore white as a symbol of solidarity, CNN reported.

"Wearing suffragette white is a respectful message of solidarity with women across the country, and a declaration that we will not go back on our hard-earned rights," Florida Rep. Lois Frankel, the chair of the House Democratic Women's Working Group, told CNN.

Like many of the other women at Trump's SOTU on Tuesday, Pelosi was dressed in white, per The Hill. USA Today reported this outfit choice is a tribute not only to the suffragette movement of the 20th century, but also to the economic security of women. According to a photo published to Twitter by The Hill's Cristina Marcos ahead of Trump's speech, Pelosi was one of many Democratic women who donned white for the occasion:

This is not the first time the working group has attempted to coordinate a message through fashion. In 2017, for example, Democratic women at the Trump's joint address to Congress also wore "suffragette white" in an effort to support Planned Parenthood, affordable health care, reproductive rights, equal pay, paid leave, affordable child care, and anti-violence initiatives. Then, last year, the working group invited lawmakers to wear all black to demonstrate solidarity with sexual assault survivors as part of the #MeToo movement. Pelosi participated in these solidarity initiatives both in 2017 and 2018.

Wearing white was not the only statement that Pelosi made on Tuesday, either. According to The Washington Post, Pelosi appeared to offer a critique of Trump's policies through her guest list at the SOTU. Among her guests were two transgender active-duty Army officers, survivors of last year's school shooting in Parkland, Florida, and Leana Wen, the new head of Planned Parenthood.

Just last month, the Supreme Court upheld the Trump administration's ban on transgender people serving in the military, prompting many Democrats — including Pelosi — to invite transgender troops to the SOTU in protest.

When Pelosi took her place behind Trump on Tuesday evening, dressed in a white suit, it was her first time occupying that seat since the Obama administration. Pelosi previously served as Speaker of the House until 2011, and reassumed the role after a record number of women and people of color helped Democrats capture a majority in the House.