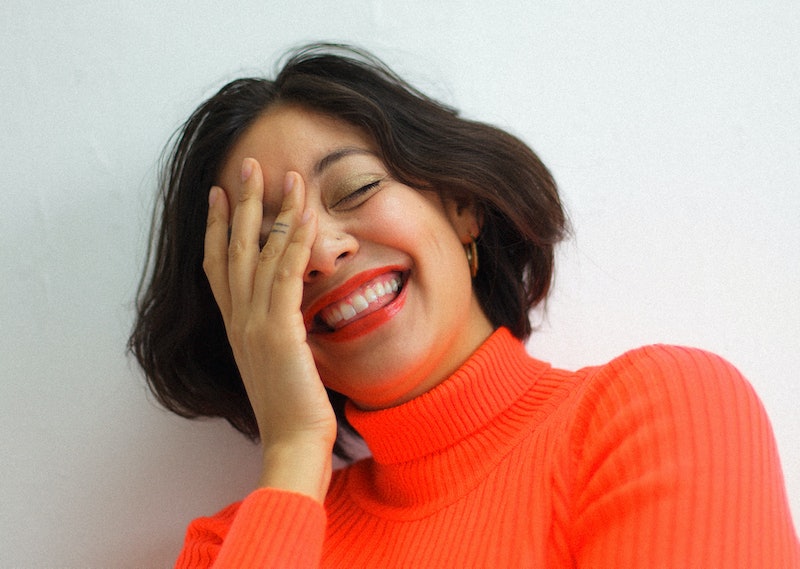 Naomi Shimada knows the power of the social media better than most. The model, activist, and now author has spent the last decade building her empire online. From her 77.4 thousand followers on Instagram, working with brands like Nike and Harrods, and being represented by Storm Models, her work has provided inspiration to so many people struggling with body image. I spoke to Shimada about her new book Mixed Feelings, why we need to talk about the pressures to be perfect, and what she does to get away from it all.

There’s no denying that since it was first launched in 2010, Instagram has become part of so many people's everyday lives. So, when Naomi Shimada and Sarah Raphael got together to write a book about what the internet and social media is doing to us, it felt like it couldn’t have come at a better time. Described as “a bible for those who refuse to fit into any box,” Raphael and Shimada send out the message that if you’re feeling a little bit overwhelmed by social media, you’re certainly not alone.

Alice Broster: What inspired you for Mixed Feelings?

Naomi Shimada: I felt like this was a conversation that needed to happen. I was having it with my own friends, behind closed doors, and seeing people allude to having these feelings on social media. People were saying that they were having to take breaks or they were feeling really anxious. Social media isn’t just social media anymore, it’s how we live.

Years ago I was approached to write a book and I was figuring out what I actually wanted to talk about. I initially got asked to write a memoir but that wasn’t what felt right for me. Sarah being a digital editor for the last 12 years had a lot of mixed feelings about how her job had evolved because of the internet. We both had a lot of weird feelings about how our jobs had evolved and, not just our jobs, but every aspect of our lives.

AB: The books shaped around lots of conversations, why did you choose to frame it in this way?

NS: We wanted it to feel human and tender. The whole book is written in a really personal way by the both of us, as well as everyone who contributed to it. I wanted to create a book that reflects the conversations I have in my real life. I think there’s something in the more personal you go with a piece of work the more people connect with it and social media is often a place for pretence and projection.

AB: Did you know from the outset who you wanted to speak to?

NS: I had a few people in mind but the project evolved and took on a life of its own. I would sometimes start talking to someone and they’d have something really interesting to say so we would ask them to write something. The number one signifier of being in this project was honesty. We asked people to be honest.

AB: The writing process is so different to how instantaneous social media can be, how have you found it?

NS: That’s exactly why we did it. These conversations can’t be had in a caption. We wanted to make something where you had to put your phone down and take more time to take in the information.

AB: Has the book changed the way you use social media?

NS: Yes, definitely. I think there’s no way that you could do a project like this that takes over years of your life and it not affect you. For me, more than anything it was about time. Taking time back into our own hands. How many hours of the day do you think you’ve lost on social media? When you look at your screen time how does that make you feel about how you spend your time?

AB: How do you keep a check of how social media is making you feel?

NS: I’ve had to do so much press over the last few weeks and been on my phone a lot so I ended up just deleting everything off my phone because I wanted quiet. I didn’t want to be bothered. I just wanted to be alone to rest and take care of myself.

AB: Did you always set out to create a platform to help women and girls struggling with body image and confidence issues?

NS: No, not at all. I just started it like everybody else. I think I started on Instagram eight years ago. It was an image sharing app for friends and family at that time. The scope of Instagram has really changed. I think some of the people that make the most powerful changes in the world don’t go out to say they’re going to do so. I don’t feel like that.

AB: Do you think it's important that we open up conversations about perfectionism on social media?

NS: Of course. But I don’t think this is a conversation that needs to be happening just on social media. I think people are obsessed by ideas of perfectionism throughout society. They’re just magnified on social media.

AB: Finally, when you were putting the book together did you have anyone you particularly wanted to reach with Mixed Feelings?

NS: This whole experience has taught me to have healthier ideas of my goals. I started this book having never written anything so for me finishing it was a huge accomplishment. I don’t have this huge plan I just wanted to create conversation that I think is happening but they need to happen more and on a bigger platform. If the book achieves that, or makes even one person feel less alone about their experiences then I feel like we’ve succeeded.

Mixed Feelings by Naomi Shimanda and Sarah Raphael (Quadrille, £16.99) is out now.

More like this
The Viral 'Little Miss' Franchise Is Focusing On Mental Health Next
By Darshita Goyal
Emma Mackey *Is* Emily Brontë In The First Trailer Of The Biopic
By L'Oréal Blackett and Sam Ramsden
Candice Brathwaite Is Over Using Her Own Life For Material
By Shahed Ezaydi
10 Must-Read New Books Out This Week
By K.W. Colyard
Get The Very Best Of Bustle/UK