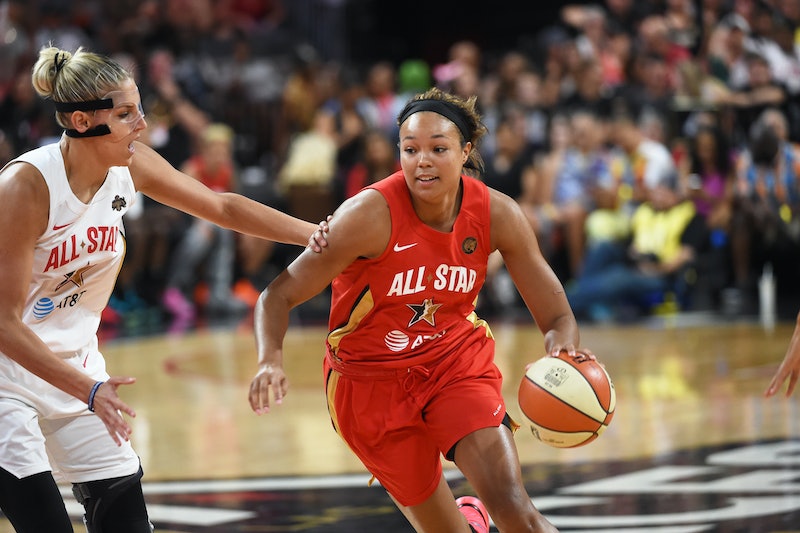 In this as-told-to for Bustle's All American: Growing Up series, WNBA star and Minnesota Lynx forward Napheesa Collier tells Bustle Lifestyle Writer Jay Polish about growing up the tallest girl in school, the pains and perks of growing into her height, and what she'd tell her teenage self.

I’ve always been tall. I had a huge growth spurt every year — I just kept on growing. My family is not very tall. My mom is average height; my dad is about six feet tall. But his side of the family is really tall and my brother is 6'3''. But even as a baby, I was tall.

I grew up in Jefferson City, Missouri. It’s the capital, but it's a small town. And it was hard at first because being a girl, I was taller than all the boys in the class. My feet were always bigger; my hands were bigger. I was just kind of awkward. And I was just really long and skinny, so I was kind of growing into my body for a long time, tripping over my legs basically.

In first grade, I remember we would all have to sit next to each other crisscross applesauce. I would have to cross my legs, but I’m also not very flexible. I remember there was so much space between me and the next person because my legs are so much longer — I laughed about that with my friends.

I discovered basketball when I was in fourth grade. Up until that point, I had played a lot of sports. I was playing soccer for a long time, I ran track. In softball, I was the pitcher. My first basketball coach played with the softball team a lot, and she said I should try out for the basketball team because I was tall. Basketball was the sport that I chose to do from there. I continued playing volleyball and I ran track my first year of high school. But once I moved to St. Louis at 15 years old, it was pretty much all basketball from there.

I would definitely tell my younger self to embrace her height because it's what's gotten me to this point in my life, and I couldn’t picture it any other way.

Being the height I was — I was six feet tall when I was a freshman in high school — starting a new school actually wasn’t that bad because I went to an all-girls high school. It wasn’t as awkward as you would think just because I was surrounded by all girls, so I didn’t care about my height as much. I actually wasn’t the tallest at that school. I was friends with the girl who was taller than me, McKenna. We lived near each other and texted about carpooling for basketball before the first day of school. So, I didn’t know she was taller than me until we met in person.

Being on the basketball team in high school was awesome. Incarnate Word Academy in St. Louis is a really decorated school; they had won a bunch of state championships, so I knew they were a good team. We had a lot of great basketball players who went on to play D1 or D2 schools. We had a great coach, and we won state championships all three years I was there.

Growing into my height in college was a much different experience for me than in high school. I felt more normal than I ever had before because at that point, everyone had pretty much reached their maximum height. When I got to college, I was surrounded by girls who were taller than me, especially being on the basketball team. The men's basketball team, who we saw most of the time, almost all of them were taller than me.

But I would go to class and I would still be the tallest person, unless there was another athlete in there. Sitting at desks was always awkward because it was never the right size for me. My legs hung out and my knees touched the top of the desk, because they're not made for tall people.

Before I knew where my height would take me, my mom would always say that she would love to be tall. (But she’s my mom so she has to say those things, I felt.) Looking back now, I understand that.

I would definitely tell my younger self to embrace her height because it's what's gotten me to this point in my life, and I couldn’t picture it any other way. Playing basketball, doing what I do now — if I weren't tall, I probably wouldn’t be doing it. I felt awkward a lot, but it’s the thing that has gotten me to do the thing I love now. I'd tell myself to hang in there.

More like this
Here’s What Sarah Jessica Parker’s Canned Cosmo *Actually* Tastes Like
By Emma Garza
Rihanna & A$AP Rocky’s Astrological Compatibility Proves They'll Be Amazing Parents
By Nina Kahn
Jake Daniels Just Became The UK’s First Active Football Player To Come Out As Gay Since 1990
By Sam Ramsden
What Is Jeanie Buss' Net Worth? The Lakers President Is Uber Rich
By Hugh McIntyre
Get Even More From Bustle — Sign Up For The Newsletter