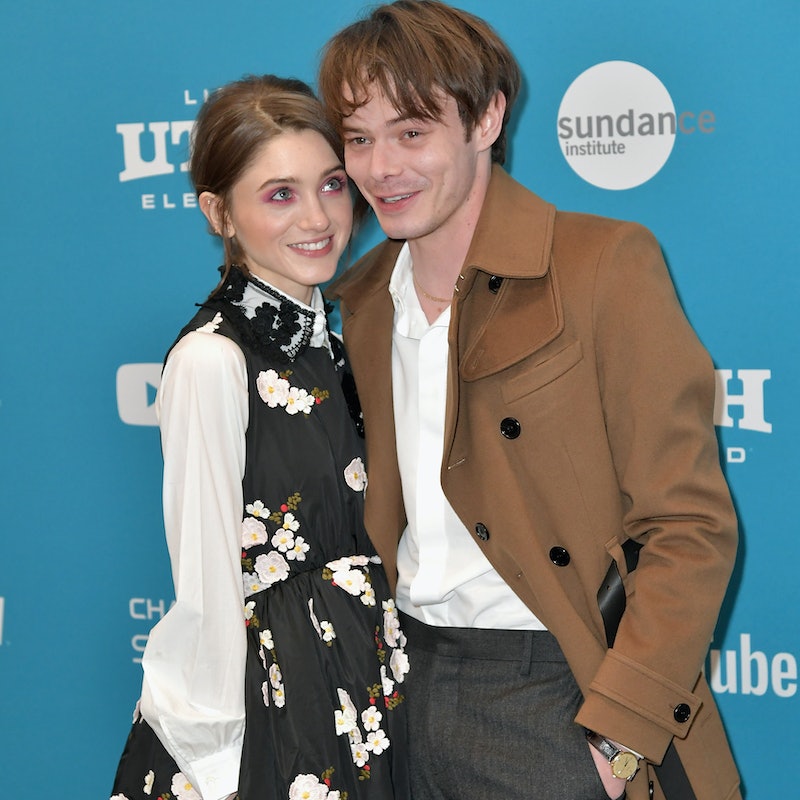 These Stranger Things costars have no problem working together, all while dating each other at the same time. Natalia Dyer opened up about Charlie Heaton in a recent interview with Refinery29. It's rare for either Netflix star to discuss their relationship. Even though Dyer's comments are brief, her words still highlight exactly how she feels about Heaton on and off set.

The two were first rumored to be dating all the way back in September 2016. They made their red carpet debut in December 2017 and pretty much confirmed they were indeed a couple, just like their Stranger Things characters, Nancy and Jonathan. Ever since making headlines as a supposed couple, they've both made comments about their relationship, but have also made it clear in their actions that they prefer to understandably keep their personal lives as private as possible. As Dyer told Refinery29 about maintaining her privacy,

"That's something important to me — with my family, with my friends, I really like to keep it for me."

She also admitted that she wasn't really prepared for how much she'd start wearing hats to conceal her identity after Stranger Things became a huge hit following Season 1. "It was definitely something to navigate. Especially living in New York, I was so used to this life of walking around and not thinking about anything. But very quickly I was like, 'Sunglasses. Baseball cap. Keep your head down.'"

Basically, privacy is huge for Dyer now more than ever before, but she still offered up a few words to Refinery29 about Heaton. So what is it like to work with and date a costar who also happens to play an onscreen love interest? She said,

"It’s an interesting thing to work with somebody who you go home with. It’s always really fun. We’re really comfortable with each other, so we can play and feel more free, and we can talk about it before."

Dyer also opened up about the future of the Netflix thriller and how much longer she and Heaton will be playing Nancy and Jonathan side by side. "There’s that sense of who knows if you’ll ever work together with this person ever again? Who knows?," she explained. "This might be your only chance to play like this."

This isn't the first time Dyer has talked about Heaton publicly. At the January 2018 SAG Awards, she told Us Weekly, "He’s talented, like everybody in the cast. They’re all super, just great to work with." After Us asked what it's like to work with someone she's romantically involved with, Dyer admitted there were "pros and cons" but that "it's a lot of fun, truly."

As for her significant other, Heaton chatted about Dyer in an interview with V Man that was published on Feb. 27. He said,

"Because we work in the same industry and have had similar trajectories, we've gone through it together. Sharing that does bring you closer. They understand something that maybe no one else would. You go into high-pressure situations together but you can share those insecurities or whatever they are. The great, happy times, too...Really f*cking sweet!"

There you have it. Both Dyer and Heaton are comfortable working together and dating each other at the same time. They definitely lean on one another and feel the same way about their relationship, especially when it comes to privacy. It sounds like they have a pretty solid relationship that's filled with support.

More like this
'Stranger Things' Finn Wolfhard Is “Proud” Of Noah Schnapp For Coming Out
By Sophie McEvoy
Selena Gomez Confirms She's Single Amid Drew Taggart Dating Rumors
By Martha Sorren, Jake Viswanath and Jack Irvin
Michael B. Jordan Tackled His "Public Breakup" With Lori Harvey On 'SNL'
By Brad Witter
Joey Essex Is Rumoured To Be Dating A 'Love Island' Favourite
By Sam Ramsden
Get Even More From Bustle — Sign Up For The Newsletter
From hair trends to relationship advice, our daily newsletter has everything you need to sound like a person who’s on TikTok, even if you aren’t.