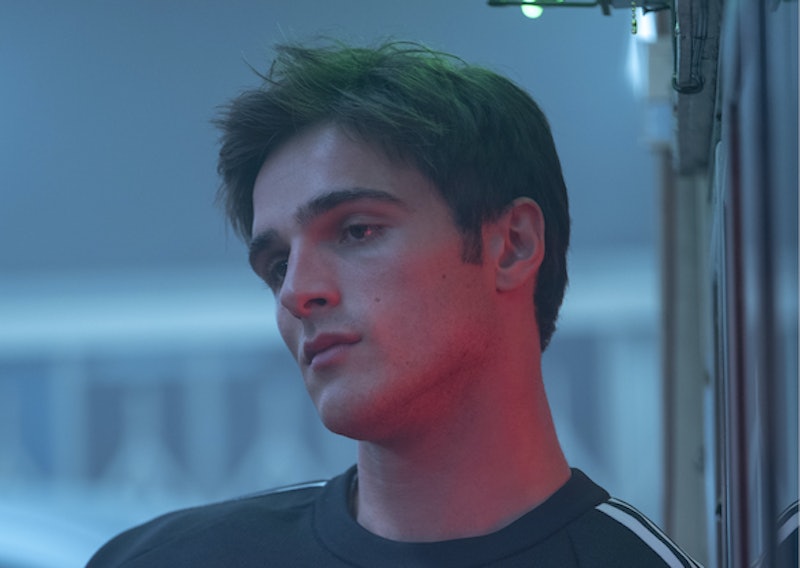 Spoilers ahead for Episode 7 of Euphoria Season 1. Whether it be Rue attempting to manage her mental health and stay sober, Maddy navigating her toxic relationship with Nate, or Jules struggling to stay out from under the thumb of the most powerful (and manipulative) boy in town, Euphoria is, at its core, a study of people in difficult situations. Considering Nate is the walking personification of white, wealthy male privilege, issues of class have always underscored the show's explorations of these topics, but the July 28 episode snapped this even more sharply into focus — exposing how it is not only people like Nate who are villains, but the class barriers that embolden them.

Class is something that informs every aspect of Euphoria, even if it's not commented on explicitly. Most of the female characters come from lower-middle to lower class backgrounds, and many from single-income households. Both Rue and Jules' families have only one breadwinner, and the same goes for Maddy, who dreams of living a life much more extravagant than her own. Meanwhile, Cassie and Lexi live with their mother in a small house where they share a bedroom.

It's unclear how their mother supports them, but we know from Rue's narration that Cassie and Lexi have never been rich, and that shapes who they are. Cassie had to give up her dream of becoming a professional ice skater because lessons were too expensive and her dad struggled to hold down a job. After Cassie's dad got into a serious car accident, he began misusing drugs and abandoned the family. As a result, Cassie often has unhealthy relationships with men, who treat her like a sexual object and then discard her.

Cassie's characterization reflects the many painful realities of teens from lower income backgrounds. Children who come from single-income households have less upward mobility than those from dual-income households, and Cassie already had to abandon her career aspirations. Lower income teens are also more likely to report feeling sadness, stress, and worry, as well as underestimate their own intelligence and self-worth, as we see in Cassie's exploitive relationships with men. And ultimately, growing up in a lower income household means a child is less likely to feel comfortable confiding in others about their worries, as Cassie struggles to reveal to her friends and family that she's pregnant.

We see this lack of social mobility in Fezco's story as well. It's implied that he left high school because there's no one else around, parents or otherwise, to keep him and Ashtray from falling into abject poverty, and that he resorted to drug dealing to pay for medical care for their terminally ill grandmother. Because Fezco is just a low-level drug dealer, the money he's making still puts him in a lower income bracket. And his unwillingness to carry the more dangerous and expensive drugs, or to sell to Rue, suggests that drug dealing isn't something he enjoys, but feels forced to do because of his life circumstances.

This rings true for many people in reality. Erin Rose at Salon found that low-level drug dealers often turn to dealing as a way to make ends meet, not because they're trying to live extravagant lives. "Try to raise a family working at McDonald's or Wal-Mart. Try to buy a house," one drug dealer said, pointing out that the minimum wage is no longer a living wage. Another dealer told Rose that he grew up broke, and it was impossible to climb out of that legally because "no financial institutions would lend to us, because we didn't have repossess-able assets."

Amid all of this is Nate, who demonstrates how upper class people often have a fundamental misunderstanding of the fact that poverty is a systemic problem. Nate mocks Fezco about dropping out of school to be a gangster, and how the only career goal he can have for himself now is to be Tony Montana in Scarface. You might expect him to be afraid of Fezco's threats, as he's proven he's not someone who should be messed with, but Nate knows he has the advantage of money and status to protect him. So, he calls the cops to punish Fezco, which only further highlights the inequality between the two men. Nate was able to avoid prison time and was even given a public apology, despite committing several serious crimes. While selling drugs is also a crime, Fezco has little to no chance of being able to bounce back from his arrest like Nate did. Instead, he'll likely be charged with a felony, Ashtray and him will be separated, and he'll now have to deal with the wrath of an actual gangster for flushing his drugs down the toilet.

This is why Nate serves as the perfect foil to the rest of the characters. He comes from old money and is the kind of person who is granted scholarships, status, and the benefit of the doubt even when he does blatantly heinous things. He has the kind of social capital that other characters like Cassie, Rue, and Fezco will likely never have in their lifetimes. So yes, Nate is one of the scariest villains on television right now, but so is the system that makes his specific version of villainy possible.