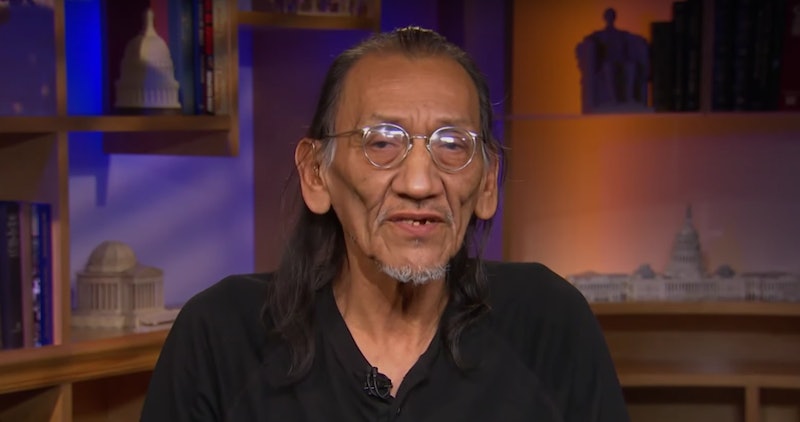 One day after MAGA hat-wearing teen Nick Sandmann appeared on the Today show, Native American elder Nathan Phillips sat down for his own interview with NBC's Savannah Guthrie. During his interview on Wednesday, Sandmann told Today that he did not owe Phillips an apology. Speaking to Guthrie on Thursday, Phillips said he stopped watching Sandmann's interview after less than a minute, though he said he forgives Sandmann nonetheless.

When Guthrie asked Phillips about his reaction to Sandmann's interview, Phillips told her that he was unable to make it through the whole thing. Somebody had tried to show it to him when he was on his way to a prayer ceremony, Phillips said, but he did not finish listening to what Sandmann had to say.

Over the weekend, video footage from Friday's Indigenous Peoples March in Washington D.C. went viral following a moment between Phillips, a member of the Omaha Nation, and Sandmann, a student from a Catholic school in Kentucky. Sandmann was part of a group of students in D.C. who attended the anti-abortion March for Life, and many of the students could be seen wearing "Make America Great Again" hats in the viral video.

The students from Kentucky's Covington Catholic High School faced widespread criticism following the video's circulation, leading Sandmann to issue a statement to CNN in which he denied blocking Phillips' path or chanting "build that wall," as Phillips claimed. Since the original footage went viral, more videos came to light depicting different angles of the encounter, causing Sandmann and those who have supported him to dispute Phillips' account of events.

During his interview with Today, Phillips said that Sandmann's statement appeared to be "coached and written up for him," and indicated a "lack of responsibility. According to the Louisville Courier Journal, a Kentucky public relations firm called RunSwitch PR has been working with Sandmann's family "to offer professional counsel" and "to ensure an accurate recounting of events." Despite feeling as though Sandmann's statement had been insincere, Phillips said he wanted to forgive "all those who have been mean to me."

"But then I went to go pray about it and then I woke up with this forgiving heart, so I forgive him," Phillips told Guthrie. "Even though I'm angry, I still have that forgiveness in my heart for those students."

When Guthrie asked Phillips if Sandmann should have apologized, Phillips suggested that he would "be way down the list of people he needs to apologize to." However, Phillips also noted that "there were a lot of times that [Sandmann] could have walked away from the encounter," contradicting Sandmann's statement that he wished he could have "avoided the whole thing."

Since the original video went viral over the weekend, both Covington Catholic High School and the Diocese of Covington have condemned the students' behavior in D.C., and the diocese has pledged to open an investigation into the incident.