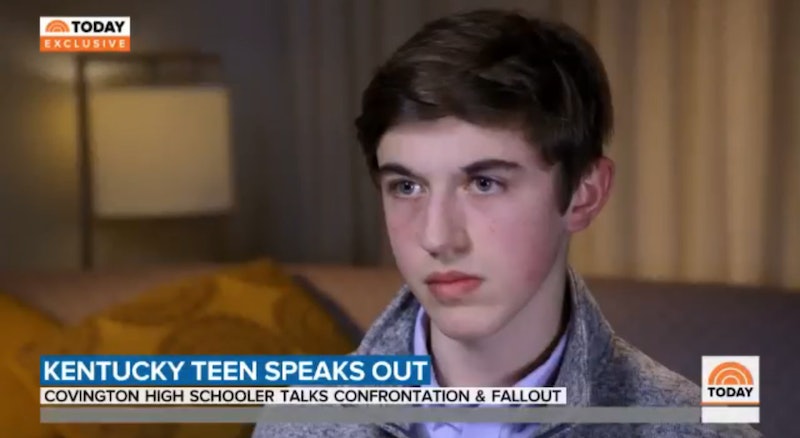 Covington Catholic High School student Nick Sandmann entered a media firestorm over the weekend when video footage of him standing directly in front of a Native American man who was playing a traditional drum went viral. In the video, Sandmann was surrounded by a group of teenage boys yelling and mimicking chopping motions with their arms. Days later, Nick Sandmann told NBC's Today that he didn't owe Nathan Phillips an apology, maintaining that he didn't disrespect the Native American elder on Friday.

“As far as standing there, I had every right to do so,” Sandmann told Today's Savannah Guthrie in an interview that aired Wednesday morning. “My position is that I was not disrespectful to Mr. Phillips. I respect him. I'd like to talk to him. I mean, in hindsight, I wish we could've walked away and avoided the whole thing. But I can't say that I'm sorry for listening to him and standing there.”

In his previous statement about what happened at the Indigenous People's March in Washington D.C., Sandmann said that Phillips approached him and he felt "startled and confused." He also claimed that he and his classmates only chanted school spirit cheers, not Trump slogans such as "build the wall," as Phillips recalled hearing.

Phillips' official statement on the video called Sandmann out for not apologizing to him. Sandmann's latest comments made clear that he doesn't believe he owes any apology, however.

“I have read the statement from Nick Sandmann, the student who stared at me for a long time. He did not apologize, and I believe there are intentional falsehoods in his testimony,” Phillips said in a statement from the Indigenous Peoples March, in which he was taking part when the video was filmed.

While Phillips initially proposed speaking with the boys to have a "dialog [sic] about cultural appropriation, racism, and the importance of listening to and respecting diverse cultures," he later told Bustle he didn't believe Sandmann had accepted enough responsibility for his actions to make a meeting worthwhile. Phillips did, however, say that he would be open to speaking with the diocese that represents Sandmann's school, which put out an apology on Saturday.

While Sandmann told Today that he would be open to meeting Phillips, he continued to deny Phillips' account of what took place on Friday. “I have the utmost respect for Mr. Phillips as another person that freely used his First Amendment right," Sandmann said. "And I want to thank him for his military service as well. And I'd certainly like to speak with him."

Guthrie's decision to interview Sandmann was met with fierce criticism on Twitter. Author Angie Thomas responded to a tweet from Guthrie announcing the upcoming interview, calling it "appalling." She added, "I'm still waiting for the day kids of color are given this much sympathy. DO BETTER."

Others have gone even further in their criticism of the interview. "White women will always do the most to protect and humanize the white supremacist patriarchy," writer Lara Witt tweeted in response to Guthrie.

For his part, Sandmann claimed that racism didn't play a role in the incident at all, claiming that none of his classmates yelled racist slurs. "We're a Catholic school and it's not tolerated. They don't tolerate racism, and none of my classmates are racist people,” he told Guthrie.

According to Today, Phillips also agreed to take part in an interview that will air on Thursday.