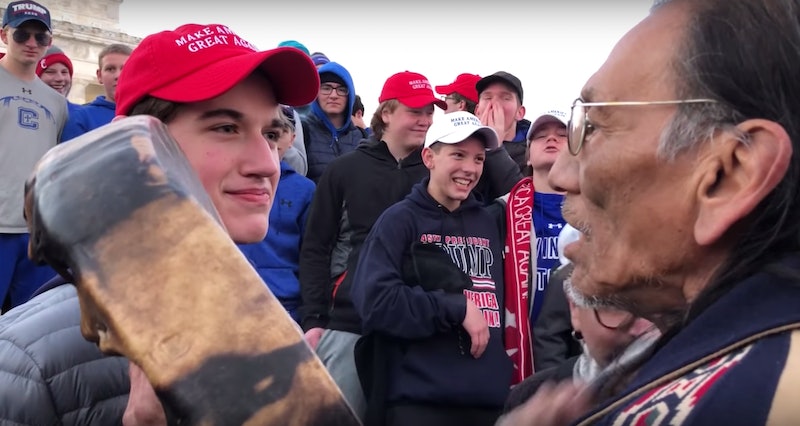 The Omaha elder in a now-viral video that has prompted debates about racism in the United States has an idea for how to move forward. In a statement from the Indigenous Peoples March, Nathan Phillips proposed meeting with Covington Catholic students, "to use what occurred as a teachable moment."

“Race relations in this country and around the world have reached a boiling point,” Phillips said in the statement. “It is sad that on the weekend of a holiday when we celebrate the life and legacy of Dr. Martin Luther King, Jr., racial hostility occurred on the steps of the Lincoln memorial, where King gave his ‘I Have a Dream’ speech.”

However, Phillips said he is willing to meet with students from the Kentucky school and, per the statement, "have a dialog [sic] about cultural appropriation, racism, and the importance of listening to and respecting diverse cultures."

After initial video footage showing the group of mostly teenage boys made the rounds on Saturday, additional video clips, taken from different angles, also began circulating. One boy, who stands closest to Phillips in the video and is seen smirking as the elder beats a drum and recites a chant, publicly identified himself as Nick Sandmann, a junior at Covington Catholic High School. In a statement, he denied interpretations portraying his actions — or his peers' — as racist or hateful.

"At no time did I hear any student chant anything other than the school spirit chants. I did not witness or hear any students chant 'build that wall' or anything hateful or racist at any time," Sandmann said. "Assertions to the contrary are simply false."

In the new statement released by the Indigenous Peoples March, however, Phillips took issue with Sandmann's perspective on what transpired between the two. Specifically, he suggested that it was not entirely truthful.

“I have read the statement from Nick Sandmann, the student who stared at me for a long time. He did not apologize, and I believe there are intentional falsehoods in his testimony,” Phillips said. "But I have faith that human beings can use a moment like this to find a way to gain understanding from one another.”

It was not immediately clear on Tuesday whether or not Covington Catholic would support a meeting between Phillips and its students. The school, with the Diocese of Covington, did release a statement in the viral video's immediate aftermath, apologizing for its contents. The statement, according to the Catholic News Agency, noted that "the actions of the Covington Catholic High School students towards Nathan Phillips specifically, and Native Americans in general…We extend our deepest apologies to Mr. Phillips. This behavior is opposed to the Church’s teachings on the dignity and respect of the human person."

The controversy surrounding the interaction, and the videos depicting it, even prompted a response from President Donald Trump, who said in a Tuesday morning tweet that Sandmann and his peers were treated unfairly.

"Nick Sandmann and the students of Covington have become symbols of Fake News and how evil it can be," Trump wrote. "They have captivated the attention of the world, and I know they will use it for the good - maybe even to bring people together. It started off unpleasant, but can end in a dream!"

In turn, in the Indigenous Peoples March statement, Phillips suggested that the controversy might prompt long-needed conversations about how the world views Native populations. “We feel that there is a distinct lack of understanding and appreciation of Native peoples and traditions worldwide," he said. "It’s time to address the indecency of culturally appropriating our ritual movements and songs for the enjoyment of non-Native peoples."