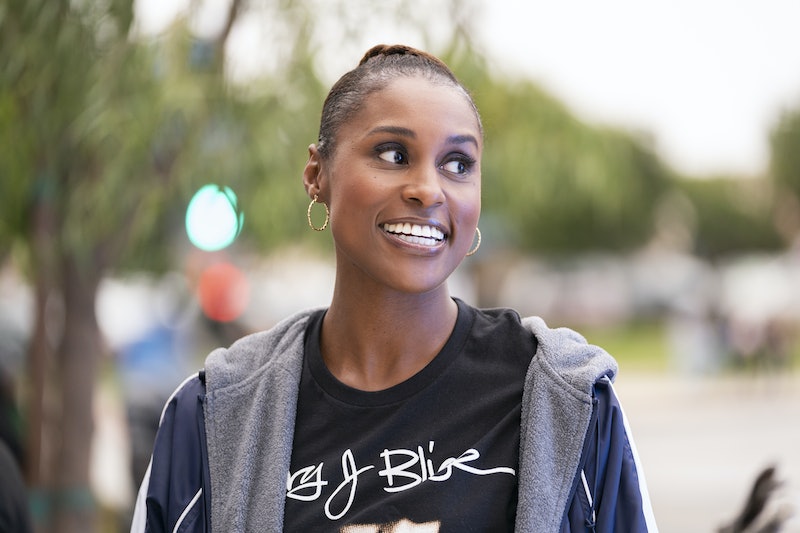 Issa finished out Insecure Season 3 in a good place, finally unpacking her apartment and putting together her new independent life. Relationship-wise, everything is up in the air and complicated as ever. Turns out Nathan ghosted Issa on Insecure because he was depressed — and the conversation isn't over yet.

Despite the many theories about what happened to Nathan on Insecure, he had left town for a month, returning with flowers on Issa's birthday. Molly, always looking out, kept the day drama-free by turning him away and telling her BFF later. Did it start a fight that revealed some truths Molly did not want to hear? Yes. Still, she probably made the right call by keeping Nathan out of the picture a little while longer. When he and Issa did get to talk, he apologized and tried to explain.

Nathan didn't really have words for what he had been going through, which is understandable. It's hard enough for anyone to be open about mental wellness and depression, specifically men and even more specifically black men. He said he had been in a negative place and impulsively left town to feel better. Issa referred to it as "a bad mood," but if Nathan really is struggling with depression, we all know it's so much more than that.

"I didn’t ask you to come into my life," said Issa, "you came to me." This is such a tough situation! On one hand, ghosting is an awful thing to do to a person, and you would hope that if someone you cared about was going through a depressive period, they would at least reach out to you once to explain what was going on. We have a responsibility to the people in our lives to maintain communication. Actions have consequences, no matter what the extenuating circumstances happen to be.

On the other hand, if depression takes control, it takes control. It's not always as simple as picking up the phone and answering that text. It sucks that when you're hurting, it's so easy to hurt others. This is one of the reasons why it's so important to get help in these situations,.

Hopefully Insecure will explore this more in Season 4. There are already so many interesting developments coming down the pike. Now that Issa is finally settled in her apartment and on her own couch for once (Season 1 ended with her on her outside couch, and Season 2 ended on Daniel's couch) she can focus on new job prospects. Hopefully that Beat Crew interview went her way, it really is a perfect fit. While the episode doesn't confirm or deny whether or not Nathan and Issa will be together in Season 4, Nathan tells her that he's there for good now. No more leaving for a month.

Meanwhile, Tiffany and Kelli patched up their friendship, Molly put some work in to get Andrew back, and Issa's new friend from the baby shower is dating... Lawrence?! That was truly a soap opera-esque twist. Insecure is over almost as quick as it began. Between all of this drama (Issa's birthday is over, so bring it on) and the potential for the HBO series to tackle stories about mental health and depression, Season 4 could be the best yet.

More like this
You’ll Most Definitely Recognise Kyle Pryor’s Soap Star Girlfriend
By Sophie McEvoy
Twitter Can't Get Over *That* Janine & Gregory Shipping Moment On 'Abbott Elementary'
By Grace Wehniainen
These 'Law & Order: SVU' Throwback Pics Show 23 Years Of Shipping History
By Grace Wehniainen
Netflix’s ‘First Love’ Is Like ‘Normal People’ Meets ‘50 First Dates’
By Grace Wehniainen
Get Even More From Bustle — Sign Up For The Newsletter