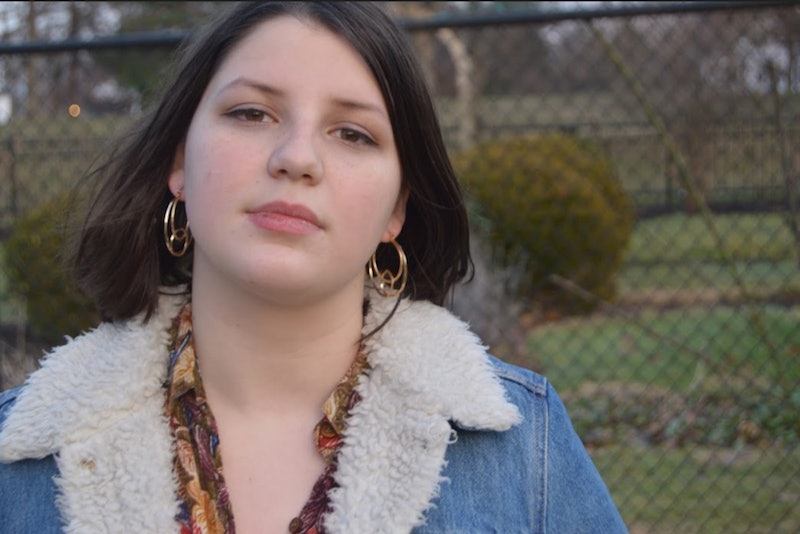 When a mass shooting at Columbine High School rocked the country in 1999, Lane Murdock was still years away from being born. Now, at 15 years old, Murdock is springing to action alongside thousands of other high school students to mark the upcoming 19th anniversary of Columbine with a student-led national school walkout. She's part of a growing movement among teenagers to take their place alongside adults and politicians in America's gun control debate following last week's deadly school shooting in Parkland, Florida.

"We really haven't had our voice heard on this topic," Murdock tells Bustle. "Students are willing to talk to each other. We're young. We're willing to hear different points of view, have open discussion, work on the nitty-gritty but also look at the big picture. Where I think adults, they tend to get a little bit more closed-minded and as it's harder to get things done."

Murdock is a sophomore at Ridgefield High School in Ridgefield, Connecticut, just 20 miles away from nearby Newtown, where a shooter gunned down 20 children and six educators at Sandy Hook Elementary School in 2012. Murdock was only 10 at the time — too young, she says, to understand the full extent of the devastation.

While Murdock is young, she says that's the very source of her power. As the organizer of National School Walkout Day on April 20, Murdock says she's leveraging two of her generation's greatest strengths — social media and idealism — to spur students nationwide to action. The plan is for students to stage a walkout at 10 a.m. in each of the country's time zones in order to call attention to the epidemic of gun violence that they've been facing in their classrooms. It's not an excuse to play hookey, either — Murdock's plan is for students to work with their teachers and administrators to plan a day of open discussion.

High school students have been raising their voices for change after the Parkland shooting left 14 teenagers and three adults dead on Valentine's Day. It is the second-deadliest public school shooting in recent American history. Yet that was "just another day in America and nobody cares," as phrased by Sylmar, California, student Sophie Peterson at a rally eearlier this week, according to CNN. To hear students tell it, they are fed up at the government inaction that's led to deadly gun violence in schools being their new normal.

National School Walkout Day is one of three movements that's sweeping the country this spring, starting with a walkout on March 14 to mark the one-month anniversary of the Parkland shooting. That movement, led by the organizers of the 2017 Women's March, calls on students and administrators to walk out for 17 minutes to honor the lives lost at Marjory Stoneman Douglas High School. Ten days later, students at Stoneman Douglas will hold the March for Our Lives in Washington, D.C. to call for action from lawmakers in Congress.

Taken together, the string of marches and walkouts is a stunning display of activism from an age group whose political power is often underestimated. "I think just the support and the students [that] have been rallying around this is proof that we are open and willing to work hard for change," Murdock says. Todd Gitlin, a professor of journalism and the sociology chair at Columbia University, believes the moment Murdock is a part of is groundbreaking.

"Going from a moment to a movement requires organize and discipline," Gitlin says. "This combination of resolve, articulateness, and tactical facility so far... is an unprecedented compound of skills." He says the real test of this student movement's strength will be seen in the days to come: "If they can keep up this momentum, they might well be able to change the game of gun reform." If they do, they'll break ground on an issue that for decades hasn't bent at all to the demands of adult activists.

Consider Murdock's Change.org petition announcing National School Walkout Day, which calls on students to don the same the color that hunters wear to increase their own visibility and prevent shooting accidents.

"I think that where adults have slipped up is — I can even see it in my own movement, people have been discussing for hours, 'Well, why [wear] orange? Shouldn't they do America's colors?'" she explains. "That's the kind of stuff adults get caught up in. And it fades all into white noise and they don't get any changes done."

Within 24 hours of going live, the petition amassed 30,000 signatures. At the time of this article's publication, it had more than 143,000 signatures. "There’s a lot of power in having hundreds of thousands of people support your petition, and they’re taking good advantage of it," Change.org spokesperson A.J. Walton tells Bustle.

"What we’ve seen differently post-Parkland, perhaps, is the rate at which young people throughout the country have so quickly turned their grief into concrete action," Walton says. "In this case it feels like a boiling point for a demographic that’s been raised in a society in which mass shootings are the norm."

"If they can keep up this momentum, they might well be able to change the game of gun reform."

Murdock says that because her generation has confronted repeated tragedies and knows how to control the virtual megaphone of social media, they're is uniquely suited to keep up the calls for change.

"The fact that I was able to start this movement from my own computer that I've had since sixth grade really says something about the power of the internet," Murdock tells Bustle. She notes that her generation has seen a major school shooting dominate the news almost every year. "A lot of the kids in high school right now have been surrounded by it their whole lives," she says of gun violence. "I think if you add those two things together, you're going to get really motivated kids with a lot of powerful tools."